The Mandarin Duck (Aix galericulata), or just Mandarin, is a medium-sized perching duck, closely related to the North American Wood Duck. It is 41–49 cm long with a 65–75 cm wingspan.

The adult male is a striking and unmistakable bird. It has a red bill, large white crescent above the eye and reddish face and "whiskers". The breast is purple with two vertical white bars, and the flanks ruddy, with two orange "sails" at the back. The female is similar to female Wood Duck, with a white eye-ring and stripe running back from the eye, but is paler below, has a small white flank stripe, and a pale tip to its bill.[2] The Mandarin ducklings are almost identical in look to Wood ducklings, and appear very similar to Mallard ducklings. The ducklings can be distinguished from Mallard ducklings because the eye-stripe of Mandarin ducklings (and Wood ducklings) stops at the eye, while in Mallard ducklings it reaches all the way to the bill.[citation needed]

There are various mutations of the Mandarin Duck found in captivity. The most common is the white Mandarin Duck. Although the origin of this mutation is unknown, it is presumed that the constant pairing of related birds and selective breeding led to recessive gene combinations leading to genetic conditions including albinism.[3]

The species was once widespread in eastern Asia, but large-scale exports and the destruction of its forest habitat have reduced populations in eastern Russia and in China to below 1,000 pairs in each country; Japan, however, is thought to still hold some 5,000 pairs.[4]

Specimens frequently escape from collections, and in the 20th century a feral population numbering about 1,000 pairs was established in Great Britain; more recently small numbers have bred in Ireland. Black Mountain, North Carolina also has a limited population. There is also a free-flying feral population of several hundred mandarins in Sonoma County, California. This population is the result of several mandarin ducks escaping from captivity, then going on to reproduce in the wild.[citation needed]

Unlike other species of ducks, most Mandarin drakes reunite with the hens they mated with along with their offsprings after the eggs have hatched and even share scout duties in watching the ducklings closely.[5] However, even with both parents securing the ducklings, most of them do not survive to adulthood.[citation needed] 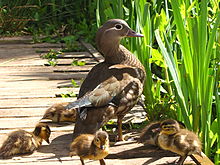 A female parent with ducklings in Richmond Park, London, England

In the wild, Mandarin Ducks breed in densely wooded areas near shallow lakes, marshes or ponds. They nest in cavities in trees close to water and during the spring, the females lay their eggs in the tree's cavity after mating. The males take no part in the incubation, simply leaving the female to secure the eggs on her own. However, unlike other species of ducks, the male does not completely abandon the female, leaving only temporarily until the ducklings have hatched. Shortly after the ducklings hatch, their mother flies to the ground and coaxes the ducklings to leap from the nest. After all of the ducklings are out of the tree, they will follow their mother to a nearby body of water where they would usually encounter the father, who will rejoin the family and protect the ducklings with the mother.[5] If the father isn't found then it is likely that he may have deceased during his temporary leave. The Asian populations are migratory, overwintering in lowland eastern China and southern Japan.[citation needed]

Mandarins feed by dabbling or walking on land. They mainly eat plants and seeds, especially beechmast. The species will also add snails, insects and small fish to its diet.[6] They feed mainly near dawn or dusk, perching in trees or on the ground during the day.

In traditional Chinese culture, Mandarin Ducks represent a life-time couple, unlike many other species of ducks. Hence they are frequently featured in Chinese art and are regarded as a symbol of conjugal affection and fidelity.

Because the male and female plumages of the Mandarin Duck are so unalike, yuan-yang is frequently used colloquially in Cantonese to mean an "odd couple" or "unlikely pair" – a mixture of two different types of same category. For example, yuanyang (drink) and yuan-yang fried rice.