The tinamous are a family comprising 47 species of birds found in Central and South America. One of the most ancient living groups of bird, they are related to the ratites. Generally ground dwelling, they are found in a range of habitats.

The family Tinamidae consists of about 47 species in 9 genera. They range in size from the Dwarf Tinamou at 15 cm (6 in) and 42 grams (1.5 oz) to the Gray Tinamou at 48 cm (17 in) and 1.6 kg (3.7 lbs). Although they look similar to other ground-dwelling birds like quail and grouse, the characters they share are the result of convergence and plesiomorphy rather than shared evolutionary innovations. Tinamids have no closer living relatives than the flightless ratites, and thus are placed in their own order, Tinamiformes. Their taxonomic names are based on the Galibi word for these birds, tinamu.[2]

"Tinamidae" was defined as by Gauthier and de Queiroz (2001): "Tinamidae refers to the crown clade stemming from the most recent common ancestor of Tetrao [Tinamus] major Gmelin 1789 and all extant birds sharing a more recent ancestor with that species than with Struthio camelus Linnaeus 1758 and Vultur gryphus Linnaeus 1758."[3]

Of Gondwanan origin, tinamids are related to the ratites. Although the fossil record in South America is generally poor, the known tinamiform fossil record goes back 10 million years. Together with the ratites, they make up Palaeognathae ("old jaws"), while all other living birds are members of Neognathae ("new jaws"). Unlike other palaeognaths, tinamids do have a keeled sternum, but like the other palaeognaths they have a distinctive palate.[4]

Recent phylogenomic studies have shown tinamids as the sister group to Australasian and Oceanian ratites (i.e., cassowaries, emus, and kiwi), with South American rheas and African ostriches as successive outgroups.[5][6] Tinamids themselves were shown to be monophyletic.[6]

Tinamous are slender and compact birds with a small head and a short, slender bill that is downward curving. The smallest species, the Dwarf Tinamou, is about 43 g (1.5 oz) and 20 cm (7.9 in) long. The largest tinamou, the Gray Tinamou, weighs 2.3 kg (5.1 lb) and measures up to 53 cm (21 in) long.[4] They have very small wings, but unlike other ratites, they can fly, albeit poorly. They have three forward-facing toes and fourth hind toe is higher and either retrogressed or absent. Their tail is short and sometimes hidden behind coverts and some tinamous have crests. Unlike other ratites, they have a preen gland. Plumage does not usually differ between sexes, but in a few species females are brighter.[4]

All 47 species of tinamous live South and Central America. The northernmost species range to Mexico but not much further than the Tropic of Cancer. One species[8] has been introduced to Easter Island. They occur in a wide range of habitats. Members of the genera Tinamus, Nothocercus, and Cryptuerellus live in dense forests, and members most of other genera live on grassland, puna, montane, and savanna at high altitude.[4]

Tinamous prefer to walk or run but will fly to avoid predation and other danger. When they have exhausted all other evasion techniques, including hiding in burrows, they may fly. Their technique is a flutter of wing-beats followed by a long glide, followed by another burst of wing-beats.[4]

Tinamous are rarely seen but often heard within their range. Although some species are quite common, they are shy and secretive. A small number of species live in more open, grassy country, but even these are wary of humans.[9] Tinamous have a wide variety of calls.[4]

Tinamous lay several eggs in a ground nest lined with grass and leaves, and the male will incubate the eggs. He will leave the nest to feed, and he may be gone from 45 minutes to 5 hours. Typically, the male will not cover the eggs when he leaves to feed, even though the eggs are not camouflaged. In most tinamou species, the male is polygamous and the female is polyandrous.[4] The eggs are attractively coloured, in a single colour and have a hard gloss like porcelain. The young are precocial, and can run almost as soon as they hatch. Scientist believe that they are self-sufficient within 20 days.[4]

Tinamous mainly eat small fruits and seeds off the ground or off of plants that are near the ground. They can jump 10 cm (3.9 in) to reach their food. They also will eat buds, blossoms, tender leaves and roots, insects and their larvae, worms, and mollusks. Small animals are eaten whole, whereas larger ones will be beaten against the ground or pecked. They use their bill and not their feet to sift through leaf litter and will even use it to sift through soil 2–3 cm (0.8–1.2 in) deep.[4][9]

The International Union for Conservation of Nature classifies five tinamou species as vulnerable and two species as near threatened.[10] The major threats to tinamous are habitat fragmentation and encroachment by humans on their habitat.[4]

Tinamous are hunted by humans throughout their range. Hunting has little negative impact on their population.[4] 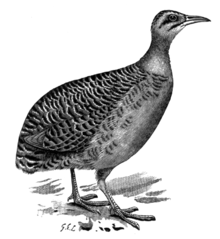 Illustration of a Great Tinamou
Main article: List of tinamidae