Aberdeen Airport (Scottish Gaelic: Port Adhair Obar Dheathain) (IATA: ABZ, ICAO: EGPD) is an international airport, located at Dyce, a suburb of Aberdeen, Scotland, approximately 5 NM (9.3 km; 5.8 mi) northwest of Aberdeen city centre.[1] 2.76 million passengers used Aberdeen Airport in 2010, a reduction of 7.4% compared with 2009, making it the 15th busiest airport in the UK.[2] The airport was the second busiest airport in Scotland, and sixth busiest in the United Kingdom by number of flight movements in 2010.[2]

The airport is owned and operated by BAA, which also owns and operates five other UK airports,[3] and is itself owned by ADI Limited, an international consortium, which includes Caisse de dépôt et placement du Québec and GIC Special Investments, that is led by the Spanish Ferrovial Group.[4]

Aberdeen Airport is a base for BMI Regional (a subsidiary of BMI) and Eastern Airways. The Airport also serves as the main heliport for the Scottish offshore oil industry. With the utilization of newer aircraft, helicopters can reach northern most platforms on both the East and west of Shetland areas. However, Helicopters frequently use Wick, Kirkwall, Scatsa and Sumburgh for refuelling stops.

The airport has one main passenger terminal, serving scheduled and charter holiday flights. In addition, there are 3 terminals dedicated to North Sea helicopter operations, used by Bristow Helicopters, CHC-Scotia, and Bond Offshore Helicopters. There is also a small terminal adjacent to the main passenger terminal, Broomfield House, used primarily for oil company charter flights to Scatsta in Shetland, operated by Eastern Airways

, established by Eric Gandar Dower, intended to link the northern islands of Scotland with London.

During World War II the airfield became an RAF base. It was the site of the Dyce Sector Operations Room within No. 13 Group RAF. Although fighters were based there through the Battle of Britain to provide protection from German bombing raids from Occupied Norway, it was mainly used as a photographic reconnaissance base.

A significant wartime event occurred in May 1943 when a German, Junkers Ju 88 fighter-bomber landed here; it was flown to Scotland by its crew, who wanted to defect to the Allied side.[5] The surrender of this aircraft was of great intelligence value at the time, as it was fitted with the latest FuG 202 Liechtenstein BC A.I radar. The aircraft survives and is displayed in the RAF Museum in London.[5]

During Air raids in World war 2, Aircraft were moved to East Fingask beside Oldmeldrum. One RAF building still remains at East Fingask, where aircrews waiting for the all clear before returning to Dyce Airfield. Virtually nothing remains from the World War 2 era at the airport due to expansion and development of the industrial estates around it.

The original Airport terminal was located at the East Side where the Airport Social club and Bond Offshore helicopters are located, a new terminal was built along with a new control tower to handle the increase in air traffic.

The airport was nationalized in 1947 and was transferred to the control of the British Airports Authority (BAA) in 1975. From 1967 and 1970 there were regular flights to Moscow and Toronto; these were later stopped due to cost related problems.

With the discovery of North Sea oil, helicopter operations began in 1967, linking the growing number of oil rigs to the mainland. As Aberdeen became the largest oil-related centre in Europe, the airport became the world's largest commercial heliport. Today, Aberdeen Airport handles more than 37,000 rotary wing movements carrying around 468,000 passengers annually. Helicopters account for almost half of all aircraft movements at the Airport.

Aberdeen have had a few interesting visitors, During an Airshow in the 1980s, Concorde did a "touch and go". A Boeing 747 owned by Alitalia also did a touch and go during a training flight from Italy, this was piloted by a local pilot from Strathdon. During the peak of the oil boom in the 1980s, British Airways used to use Lockheed Tristar for the Heathrow shuttle. To marshal the aircraft in, the marshaller had to stand on the terminal building room so the pilot could see them.

Until March 2005, aircraft were not allowed to take-off or land between 22:30 and 06:00 local time due to noise constraints. The city council overturned this ban, however, despite some Dyce residents' objections, and the airport is now open 24 hours a day.

General aviation (light aircraft) flight training takes place from the East Side of the airport and based in the ground Handling agents premises. The ground handling agent there also manages the VIP flights and corporate jets that park on the Eastside Apron.

The air ambulance (fixed wing) is based on the eastside apron in a dedicated hanger, the company operates King-Air aircraft from Aberdeen. 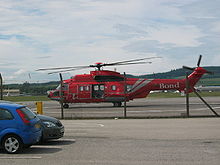 BAA expects to spend £60million on extending the runway farther still to allow bigger, more modern aircraft to fly from Aberdeen to destinations across the Mediterranean, North Africa and North America, as well as building a bigger, better-equipped terminal and new parking stands for aircraft. During the construction phase of the runway extension and taxiiway, the airport's military past has been revealed. To date two pieces of WW2 ordanance has been unearthed. The reason for this is the taxiway extension route straight runs straight through the old bomb dump. The runway extension has now been completed 8 months early, allowing the potential for new services in 2012 using larger aircraft such as the Boeing 767.

BAA predicts passenger numbers at Aberdeen will rise to 5.9 million by 2030, and says the expansion will create more than 1,200 jobs at the airport and many more across Scotland.[6]

Refurbishment work will see the installation of a segregated walkway for passengers, as well significant enhancements to the international arrivals hall and improvements to jet parking stands.

The first phase of the work will be completed early next year, with all upgrades conforming to UK Border Agency requirements.

Phases two and three will then involve additions to the international arrivals hall, centring on improving its passport control and baggage reclaim facilities as well as increasing floor space.

A separate £2 million project to transform the terminal forecourt at Aberdeen Airport got underway in July 2008 and was due to be completed that autumn.

On October 6 2011 Aberdeen Airport announced the 124 metre runway extension had opened 8 months ahead of schedule. http://www.digitalhen.co.uk/news/uk-scotland-north-east-orkney-shetland-15171962 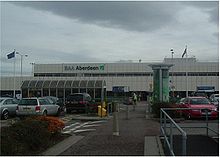 The main terminal before renovation

There is also a Thistle Hotel and Speedbird Inn on the airport site, with a Travelodge and Marriott Hotel between the airport and the nearby Dyce railway station.

The airport is linked to nearby Dyce railway station by the 80 Dyce Airlink shuttle bus which runs between the station, airport, heliport and Kirkhill industrial estate every 20 minutes between 06:45 and 19:00. Journey time between the airport and station is 15 minutes.

Following an increase in the frequency of train services to Dyce station, First ScotRail now provides an almost half-hourly service to and from Aberdeen during the day.

Additionally many more trains from the south have now been extended to stop at Dyce, giving the station direct links to Dundee, Edinburgh, Glasgow and intermediate stations, as well as stations northwards on the line to Inverness.

Aberdeen Airport is served by local and express bus services operated by First Aberdeen and Stagecoach Bluebird. Chartered buses can also be booked with local operators.

The airport lies on the main A96 Aberdeen to Inverness road, being only a few kilometers from the city centre itself.