City of Derry Airport (IATA: LDY, ICAO: EGAE) is an airport located 7 mi (11 km) northeast[3] of Derry, Northern Ireland. It is located on the south bank of Lough Foyle, a short distance from the village of Eglinton and 8 mi (13 km) from the city centre. The location of the airport beside a RSPB bird sanctuary[4] has been a matter of concern for some time following several reported bird strikes, the latest being on 3 August 2009.[5][6]

Eglinton Aerodrome, as it is known locally, has a CAA Ordinary Licence (Number P620) that allows flights for the public transport of passengers or for flying instruction as authorised by the licensee (Derry City Council).[7][dead link]

The airport has its origins in World War II. In 1941 RAF Eglinton air base was established as the home to No. 133 Squadron RAF which flew Hurricane fighters in defence of the city. In 1942 the base was occupied by the No. 41 Squadron RAF. In 1943 the airfield became a Fleet Air Arm base called HMS Gannet and was home to the No. 1847 Fleet Air Arm Squadron which provided convoy air cover as part of the Second Battle of the Atlantic.

After the war the base remained a military establishment until the 1950s when the Ministry of Defence returned much of the land to the original landowners. The original name of the airport was Londonderry Eglinton Airport and was usually just referred to as Eglinton. Some limited commercial activities were undertaken at the airfield during the 1960s when Emerald Airways operated a Glasgow service. During most of the 1970s the only flying at Eglinton was carried out by Eglinton Flying Club which is still based at the airport. In 1978 Londonderry City Council decided to purchase the airfield with a view to improving the transport infrastructure for the north-west of Ireland. The airport has slowly developed since then with private short-haul charters to various destinations within the British Isles, a service which still continues including the recent addition of helicopter pilot training and charter services. Loganair introduced the first scheduled flight between Derry and Glasgow in 1979, a route which was recently dropped due to rising fuel costs. This route was the only route for ten years until Loganair introduced an additional daily Manchester service in 1989.

A major redevelopment programme was undertaken by the Council from 1989 to 1993 with grant aid from the European Regional Development Fund. £10.5 million was spent upgrading all of the facilities at the airport including runways, taxiways, access roads, navigation equipment and runway lighting, as well as a new purpose-built terminal and fire station. The new terminal was officially opened in March 1994. The name of the airport was officially changed from Londonderry Eglinton to the City of Derry Airport by Derry City Council following Nationalist support within the newly renamed council. However, as of July 2009, the Aeronautical Information Publication published by the UK's air navigation service provider, National Air Traffic Services, still shows Londonderry/Eglinton.[1] At that time there were still only two scheduled routes carrying about 40,000 passenger each year. 1995 saw the arrival of Jersey European Airways who attempted to operate a short-lived shuttle link between Derry and Belfast City Airport. 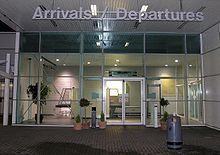 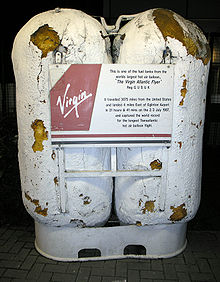 Fuel Tanks currently displayed at the airport from the Virgin Atlantic Flyer, the transatlantic hot air balloon, which landed four miles away in 1987

During 1998 and 1999 safety improvements were undertaken at the airport as a matter of priority. As the airport served Northern Ireland and Donegal in the Republic of Ireland, funding was sourced and thereafter provided by the Irish Government in addition to that provided by the British Government and Derry City Council. These improvements meant that larger aircraft could use the airport, thus, Falcon Holidays started holiday charter flights in May 1999, followed in July by Ryanair who operated scheduled flights. The Ryanair service to London Stansted grew substantially and the Loganair routes continued to operate until October 2008 as a British Airways franchise, including a sector to Dublin, initiated as a public service obligation route, subsidised by the Irish Government. Soaring fuel costs have now seen all British Airways operations to Northern Ireland suspended indefinitely.

Aer Arann operated services to Manchester and Birmingham for a short time.[8]

In May 2006, the European Commission gave its approval for the British and Irish governments to invest €15 million in the airport. Although this work did not include for the lengthening of the single serviceable runway, it included the expansion of the safety zones at each end which would allow jets to land and take off with full passenger capacities. Operators of Boeing 737 jets were previously limited to 80% capacity as a safety feature due to the short length of the runway. Other works included the expansion of the apron immediately in front of the control tower which would allow for the parking of several aircraft at any one time. As a prelude to the expansion at the airport several families were removed from their homes under a Government Compulsory Purchase scheme before the buildings and outbuildings were levelled.

At the end of 2008, British Airways, operated by Loganair as a franchise agreement, ceased the Glasgow International route which had operated for 30 years, following the loss in July 2008 of their public service obligation route to Dublin. This route is now operated by Aer Arann. Aer Lingus Commuter had previously operated the route until 1994.

Ryanair also discontinued the Bristol route and changed its Derry - East Midlands route to Derry - Birmingham announcing new flights to London Luton and the airport's first scheduled international service to Alicante which commenced in June 2009. The London Luton route was however subsequently terminated on 27 March 2010.

The decrease in operational hours at the airport as a direct consequence of the challenging economic conditions have caused problems for Eglinton Flying Club and the helicopter flight training facility who in turn have threatened to leave the airport if the decisions are not reversed. They have claimed that this would cost the airport some £250,000 in annual revenue while the owners, Derry City Council, have countered that the decrease in operational hours was necessary as part of the implementation of the £600,000 budget reduction plan.

In January 2009 the council appointed Albert Harrison, the former head of Belfast International Airport, as the new manager of the airport. He had been tasked with turning the loss making facility around and has been given just six months to implement savings of £600,000 per annum and increase the number of carriers, destinations and passengers. However more recently, newly appointed City of Derry Airport manager, Damien Tierney has taken control of this cost saving project.[9] 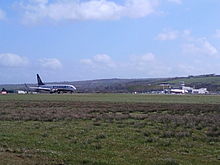 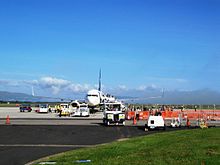 Ryanair aircraft sits on apron at City of Derry Airport

The recently completed runway safety zone extension and apron works has allowed the CAA to lift the capacity restriction on aircraft operating out of the airport. This has increased seat availability and passenger throughput at the airport. It has also enabled Ryanair to establish their first international route from the airport to Alicante. Also announced was a new charter flight to Burgas in Bulgaria to be operated by BH Air.[10] The Burgas flight will not operate for summer 2011 as PAX numbers for 2010 were not as expected.

In April 2009 the council issued tender documents for a multi-million pound expansion of the terminal to improve passenger flow and meet current EU customs and immigration regulations.[11] The arrivals hall has recently been improved and tax free shopping, WHSmith and the Amelia Earhart Business lounge in the departure area are open during operational hours.

In mid-2009 work commenced on dualling the A2 from Maydown to Eglinton and the airport, which now provides a high speed dual carriageway connection to the city. This project was intended to be the first of several schemes including the "A5 dualling Derry to Aughnacloy "[12] planned to commence in 2012 and the "A6 dualling Dungiven to Derry"[13] due to commence in 2013. It is projected that these schemes will greatly increase the catchment area for the airport rendering it a viable alternative to Northern Ireland's two other main airports.[14]

Plans have also been announced that Derry City Council, who own and operate the airport are tendering for a development plan which could see a Hotel, Aircraft Painting Hangars, Freight Buildings and Office Accommodation built in the next 10 years.[15]

2010 saw the commencement of a new route to Faro with Ryanair, the airport's second scheduled international destination. Routes were also announced to Edinburgh and Manchester with Aer Arann, however due to lower than expected public demand the routes have been suspended until market conditions are more favourable. It has also been announced that the Irish Government will no longer subsidise the Derry-Dublin route from July 2011.

The airport is to develop further Ryanair routes from the airport to European cities such as Barcelona and Paris. In addition discussions are under way with a third operator about re-establishing flights to Bristol and, possibly, into one of the business hubs in London such as Gatwick or Heathrow.[16]

As of April 2010, it has been reported that the airport has emerged from passenger recession, with passenger numbers released for February of the same year showing an increase over that of the same period for the year before. This increase is reported as 562 passengers and however modest this may appear, it has been further reported that the first flights for Faro began fully booked.[17]

Ryanair have confirmed that the Stansted route will operate 2x daily on a Monday and Friday from 15 April 2011.

Flybe commenced operation from the airport to Manchester on 19th May 2010.

On 9 October 2009, Derry City Council who own and operate the airport began the process which will lead to the privatisation of the facility. Initially a holding company will be set up by the council which will own 100% of the shares, thereafter the council intends to do market research to seek the level of interest in private sector investors. As part of the privatisation plan two subsidiaries will be formed that will operate the airport and manage the estate.[19]

In June 2010 it was announced [20] that the Airport was in the final stages of discussion with the Balfour Beatty Group about a management contract, with the objective of bringing additional commercial experience and resources to the Airport for the economic benefit of the region and to reduce the subvention from the City Council.

Departures board at City of Derry Airport

Passenger numbers for 2005 fell following a reduction in Ryanair services to London Stansted due to safety restrictions over the absence of a runway overshoot area. Services were then restored following the commencement of work on a runway extension. In 2006 new Ryanair services commenced to East Midlands, Liverpool and Glasgow Prestwick, with Bristol commencing in November 2007.

Passenger numbers for 2008 were 438,996, but fell 21.2% in 2009 to 345,857 due to flight and route cancellations despite the announcement of new flights and removal of passenger number limits on existing flights following the completion of the runway extension.