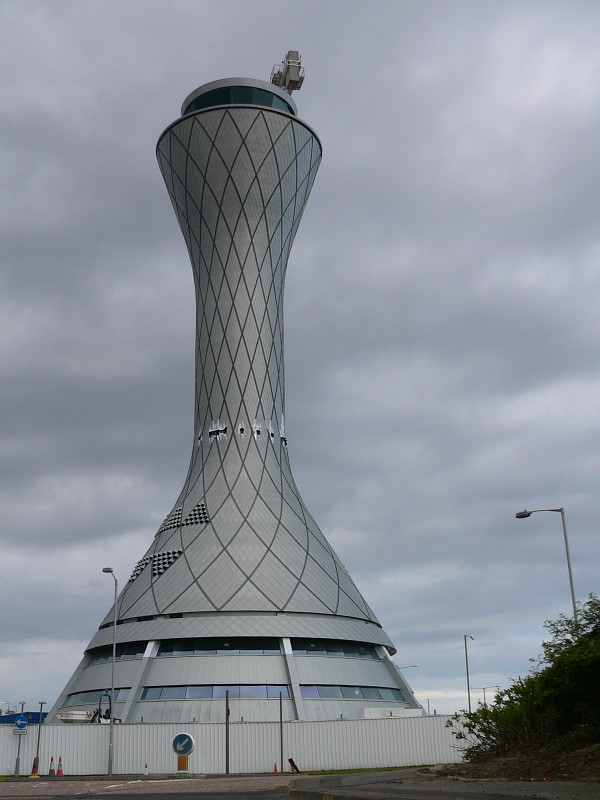 Edinburgh Airport Airport codes|EDI|EGPH is located in , , and was the busiest in Scotland in 2007, handling 9,047,558 passengers. It was also the seventh busiest airport in the UK by passengers and the fifth busiest by air transport movements. It is located 8 statute miles (13 km) west of the city centre and is situated just off the .

Edinburgh Airport is easily reached by the M9 and M90 motorways and is close to the Fife Circle and Edinburgh-Glasgow railway lines. Express bus services link the airport to Edinburgh City Centre by Airlink 100, to Inverkeithing railway station and Ferrytoll Park and Ride in Fife by Stagecoach Service 747, to Edinburgh Park, Sighthill, Fountainbridge, Holyrood and Leith by Service 35 and to Livingston, Broxburn, East Calder, Mid Calder by E&M Horsburgh Service 555/777.

The present terminal building, designed by , was constructed in 1977 and has been upgraded in recent years, with new car parking facilities and an extended arrivals hall. A new control tower was completed in 2005.

There are plans for expansion of the airport, with passenger numbers expected to reach 26 million per annum by 2030.

Turnhouse Aerodrome was the most northerly British air defence base in . The small base opened in 1915 and it was used to house the 603 (City of Edinburgh) Squadron, which consisted of DH 9As, s, s, and light bombers. All the aircraft used a grass air strip.

In 1918 the Royal Air Force was formed and the airfield was named RAF Turnhouse and ownership transferred to the Ministry of Defence.

When broke out, fighter command took control over the airfield and a runway of 3,900ft was paved to handle the Vickers .

When the war ended the airfield still remained under military control, but by the late 1940s the first commercial services were launched. In 1947, started a service between Edinburgh and using s followed by the Viscount and Vanguard series.

In 1952 the runway was extended to 6000ft to handle the Vampire FB5s. In 1956 a new passenger terminal was built to offer improved commercial service and five years later it was extended. The Ministry of Defence transferred ownership to the in 1960 to offer improved commercial service to the airport. In 1971 the British Airports Authority took over the airport and immediately started to expand it by constructing a new runway and terminal building.

Although the original runway 13/31 (which is now 12/30) served the airport well, its alignment had the disadvantage of suffering from severe crosswinds, so movements were transferred to a new runway (07/25, which is has since become 06/24). This runway, completed in 1977 is 8399ft in length, and was able to take all modern airliners. A new terminal was built alongside the runway to cater for the additional traffic. The old terminal and hangars were converted into a cargo centre.

The only international services from Edinburgh during the 1980s were to and , but in the following years links were opened to destinations in and . By the end of the decade BAA had been privatised and funds were used to extend the current terminal building and create parking aprons.

An extension to the terminal opened in September 2006. This added six gates on a new pier to the South-East of the earlier building.

In July 2007 BAA announced it would be [http://news.scotsman.com/scotland.cfm?id=1048432007 expanding the current departures hall] to add extra waiting areas, shops and restaurants for the increase in passengers. Also it would extend the south east pier to add three more gates to increase capacity, but it is rumoured that these will be for large aircraft. BAA also plans to resurface the runway as part of their £1 billion investment in the airport.

The is due to connect to Edinburgh Airport in 2011 [http://www.theengineer.co.uk/Articles/306270/Tram+to+Edinburgh.htm]

BAA has made provision in its Master Plan for the airport for an extension to the current runway 06/24, which would allow larger aircraft to serve longer haul destinations. There are plans to expand further by adding a new runway and terminal by 2020 which would accommodate up to 20 million passengers per annum [http://www.independent.co.uk/news/uk/home-news/evidence-supporting-airport-expansion-is-flawed-says-government-adviser-831508.html] . BAA projects that by 2030 Edinburgh Airport will be handling 26 million passengers per annum [http://www.edinburghairport.com/portal/page/EDI%5EEdinburgh+Press+Releases/006ec1dd15d6c010VgnVCM20000039821c0a____/a22889d8759a0010VgnVCM200000357e120a____/] .

On , a (G-BNMT) operating a flight to , crashed into the shortly after taking off from Edinburgh at 1730 GMT. Both crew members were killed, but there were no passengers on board. A fatal accident inquiry later blamed a build up of slush in the aircraft's engines before the crash. Protective covering had not been fitted to the engine intakes while the aircraft was parked for several hours in heavy at Edinburgh. [Scotsman: [http://news.scotsman.com/topics.cfm?tid=153&id=1252812003 "Pilots praised as sheriff confirms snow caused crash"] , 13 Nov 2003]