Newquay Cornwall Airport (IATA: NQY, ICAO: EGHQ) is the main commercial airport for Cornwall, United Kingdom, located at Mawgan in Pydar 4 NM (7.4 km; 4.6 mi) northeast of Newquay on Cornwall's north coast. Its runway was previously operated by RAF St Mawgan before the runway was handed over in December 2008. The airport is located close to attractions such as The Eden Project, and Tate St Ives. It is also close to the city of Truro.

Newquay has a CAA Public Use Aerodrome Licence that allows flights for the public transport of passengers or for flying instruction.

The runway is able to take the very largest and fastest of civil and military aircraft, having been built and maintained for decades as a United States Air Force (USAF) strategic nuclear bomber base[citation needed]. With the end of the Cold War and changes in American political priorities, the Americans pulled out of all involvement with the base by the end of 2009. The last RAF flying squadron based at St Mawgan was 203(R) Squadron which operated as the Sea King Operational Conversion Unit (OCU) and has now moved to RAF Valley in Wales.

Future expansion of the airport 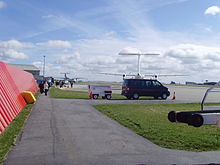 The new terminal extension has increased the terminal size by 20%, and was opened in 2006. This means the airport can handle as many as 450,000 passengers a year. In January 2008, Cornwall County Council approved plans for an expanded arrivals hall and departure lounge; a new retail outlet; a business lounge and new airfield structures CAA, which were needed to gain the civil license. In May 2008, the new arrivals and baggage reclaim area was opened; now allowing both domestic and international flights to simultaneously be processed unlike the old arrivals hall. This also added a gate to the departures lounge.

The expansion of the airport has been criticised by a number of environmental groups. This opposition is based not only on environmental concerns (given that the majority of flights are short-haul and to destinations that could be served by rail), but also socio-economic concerns that airport expansion will lead to a greater demand for second homes in Cornwall, adding to already inflated local house prices.[3]

In November 2008, amidst the airport troubles, Newquay Airport released their draft master plan, outlining their plans for the airport until 2030.[4]

In July 2011, the airport's main carrier, Air Southwest, announced the end of all flights from Newquay with effect September 30, 2011, leaving the airport with only three year-round scheduled routes. 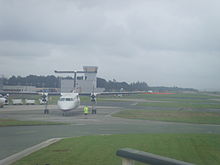 The new control tower at Newquay Cornwall Airport as of 29 July 2008.

History of the airfield and the RAF withdrawal

The airfield was originally opened in 1933 as a civilian facility, but was requisitioned at the outbreak of World War II and named RAF Trebelzue to support other bases in the Cornwall area. The base was then renamed RAF St Mawgan 1943, after expansion. The facility was then handed to the USAAF where a number of improvements took place, including the building of a new control tower and expansion of the current runway. The airfield was then put under maintenance in 1947, and reopened as a Coastal Command base in 1951. Since 1951, the base has seen various squadrons based; including 22 Sqn., 203 Sqn. 220 Sqn. (later renamed 201), 228 Sqn. (later renamed 206), both Long Range Reconnaissance Squadrons, 42 Sqn., 7 Sqn., 2625 Sqn (Royal Auxiliary Air Force) and 1 Sqn. (RAF Regiment) - 2625 Sqn was disbanded on 1 November 2006, whilst 1 Sqn relocated to RAF Honington. The others relocated or closed. In 2005, RAF St Mawgan was one of the bases shortlisted to house the new Joint Combat Aircraft (JCA) in 2013, but in November 2005, it was announced by Minister of State for the Armed Forces Adam Ingram, that the operation would be based from Scotland. Helicopter maintenance (HMF) also ceased here in late 2006.

The flying operations at the RAF St Mawgan, (on the opposite side of the runway to the civil terminal) ceased in December 2008.

In late 2008 the airport closed for the period from 1 December until 19 December. This was to allow extra time for the take over the airfield navigation services (i.e. Air Traffic Control/Fire Services) from RAF St Mawgan and to fully meet CAA standards. Following further inspections by the CAA, flights recommenced on 20 December 2008.

By virtue a recent Statutory Instrument issued on 22 September 2009, Newquay Airport will from the coming in force of this instrument on 1 November 2009 be subject to current airport byelaws, as per Section 63 of the Airports Act 1986[5]

In 2006 the airport introduced a £5 per passenger airport development fee, payable by all departing passengers via an ATM type machine prior to passing security.[6] This resulted in Monarch Airlines axing its route from the airport (to Málaga) and Ryanair reducing the number of flights, though this was later restored. In early 2011, Ryanair once more ceased to operate from the airport.