Norwich International Airport
This article is about the civil airport. For the military base, see RAF Horsham St Faith.

Norwich International Airport (IATA: NWI, ICAO: EGSH), also known as Norwich Airport, is an airport in the City of Norwich within Norfolk, England 2.8 NM (5.2 km; 3.2 mi) north of the city centre and on the edge of the city's suburbs.

Norwich Airport has a CAA Public Use Aerodrome Licence (Number P723) that allows flights for the public transport of passengers or for flying instruction.

Norse Operates a Park and Ride service a 2 minute walk from the airport direct to Norwich city centre on Monday – Saturday every 10 – 15 minutes.

Norwich airport is situated on the A140, which travels from Ipswich via Norwich to the seaside town of Cromer; this also provides easy road access to Norwich city centre.

Future Road Links: There are plans for the Norwich Northern Distributor road to link the airport to the A47, stopping people using the congested ring road, and providing faster and better connections to other parts of the county and country.

Taxis are available directly outside the terminal building 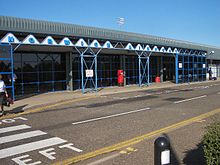 The first Norwich airport was set up on a former First World War aerodrome on Mousehold Heath under what is now the Heartsease housing estate. This fell into disuse in the early part of the Second World War.

In September 1942 Horsham St. Faith was made available to the United States Army Air Forces for use by the Eighth Air Force. The USAAF designated the airfield as Station 123 (HF).

The airfield was transferred to RAF Fighter Command on 10 July 1945 when it was occupied by four Gloster Meteor Squadrons. RAF Horsham St. Faith was a front-line RAF station for many years, and its squadrons participated in many post-war exercises. The station was deactivated on 1 August 1963.

The Royal Air Force left Horsham on 24 March 1967. Over the following two years the major part of the airfield and buildings were sold to Norwich City and Norfolk County Council, a small part being retained by the Ministry of Defence (MoD). Norwich Airport Ltd under ownership of the County and City Councils developed the modern day Norwich International Airport.

Most of the World War II buildings used by the United States Army Air Force remain, although converted for a variety of purposes. Three of the five large pre-war hangars are still being used for aircraft maintenance. Two have been converted for commercial use. The control tower still exists although the top has been restored and a new tower has been built adjacent to the present main runway. Other wartime buildings now form part of the airport industrial estate (owned by the County and City Councils) and are intermingled with many newer structures.

The former RAF accommodation blocks situated towards Old Catton were until 1993 used by the University of East Anglia as accommodation for students, known to students as "Fifers Lane" halls these have since been demolished and the site redeveloped as housing. The remaining MoD property, formerly enlisted men's quarters, has become married quarters for nearby RAF stations.

Whilst most runways and taxi-tracks from the military airfield remain, only one runway is primarily used, east–west runway 09/27, which was extended eastwards by the RAF in 1956, to avoid takeoffs and landings over built-up areas. The old 04/22 runway is no longer used for takeoffs or landings, but is used for parking and taxiing of larger aircraft.

Adjacent to the airport terminal building opened in 1988 there is a memorial display relating to the USAAF, consisting of photographs, paintings, and a plaque commemorating the American use of the airfield.

In March 2004, the City and County Councils sold 80.1% of Norwich Airport Ltd to Omniport[12] whilst retaining the further 19.9%. Omniport has also acquired 100% of Norwich Airport Travel Ltd. Since the sale to Omniport the airport has become one of the UK hubs for budget carrier Flybe and the number of flights and destinations served have rapidly increased. In 2005 a £3.5M terminal expansion programme began.

It was announced in April 2008 that Flybe was to reduce routes and frequencies from Norwich Airport. Glasgow was axed by May and Paris-Charles de Gaulle was being merged into a Norwich-Jersey-Charles de Gaulle service, making it an indirect service. Guernsey is having its frequency dropped to one Saturday flight.

On 5 July 2008, LTE International Airways started scheduled flights to Alicante, Barcelona and Palma de Mallorca for the summer 2008 season and in addition to these routes from winter 2008/2009 they had announced new routes to Malaga, Tenerife and Gran Canaria, however due to financial difficulties with the airline, LTE services (including all from Norwich) are suspended until further notice.

During filming of the BBC show Top Gear, operations from the airport appeared disrupted when a caravan, adapted into an airship and flown by James May, drifted overhead the airport, infringing its controlled airspace. In reality, the event occurred after much pre-planning with the airport authorities and the BBC, and scenes showing the airship in the airfield boundary were actually filmed after the blimp had lifted from the airfield to satisfy the requirements of the film crew.[13]

During 2008 Flybe advertised for actors to fly for free to Dublin from the airport to avoid a £280,000 fine. It was projected to be 172 passengers short of the required minimum 15,000 passengers and advertised 200 free flights to make up the numbers. They said they would carbon offset the flights.[14] Plane Stupid asked why airports require minimum passenger levels in the first place.[15]