Flybe Group PLC (styled as flybe) is a British low-cost regional airline headquartered at the Jack Walker House at Exeter International Airport in Devon, England.[2] It operates over 180 routes to 65 European airports[3] and is Europe's largest regional airline, carrying over 6.7 million passengers during 2010.[4]

Flybe's largest base is Southampton Airport and it has other large bases at Manchester Airport, Birmingham Airport and Belfast City Airport and 14 aircraft and crew bases across the United Kingdom, the Channel Islands and Isle of Man.

The company holds a United Kingdom Civil Aviation Authority Type A Operating Licence permitting it to carry passengers, cargo and mail on aircraft with 20 or more seats.[7]

The company operates a strong regional network in the Nordics and Baltics after acquisition in collaboration with Finnair of the Finnish airline, Finncomm Airlines since rebranded as Flybe Nordic. The goal is to become the biggest regional player in the Northern European region.

Flybe started operations on 1 November 1979 as Jersey European Airways (JEA), as a result of a merger of Jersey-based Intra Airways and Bournemouth-based Express Air Services.[8][9] Jersey European Airways was the brainchild of John Habin, a resident of Jersey and the majority investor in JEA. Having sold Aviation Beauport and other business interests, Habin established a few key routes from Jersey to the UK. Jersey European Airways was taken over in November 1983 by Jack Walker's Walker Steel Group who were already the parent company of Blackpool based charter airline Spacegrand Aviation. The two airlines were run separately, with partially shared management, until their amalgamation within the Walker Aviation Group in 1985, under the Jersey European name, with the airline's headquarters moving to Exeter.[10]

The airline rebranded as British European in June 2000,[11] shortening this title to Flybe on 18 July 2002 and repositioning itself as a full service, low-fare airline. On 3 November 2006 it was announced that agreement in principle had been reached for Flybe to acquire BA Connect, with the exception of London City Airport services. The acquisition was completed in March 2007. The airline is owned by Rosedale Aviation Holdings (69%), Flybe staff (16%) and International Airlines Group (15%) as a consequence of the acquisition of BA Connect. It had 3,000 employees at January 2008.[12] Chief Executive Officer Jim French was recognised in the 2009 Queen's Birthday Honours List with a CBE for his services to the airline industry.[13]

On 5 March 2007 Flybe completed the acquisition of the former regional airline business of British Airways. The purchase was first announced on 3 November 2006 with British Airways acquiring a 15% stake in the airline. The acquisition (which did not include BA Connect's London City Airport routes, which have been taken over by BA CityFlyer) has increased Flybe's route network in both the UK and continental Europe making Flybe Europe's largest regional airline.[14]

The agreement will see Loganair aircraft flying in Flybe colours on 55 routes from Scotland.[15]

On 10 December 2010, Flybe floated on the London Stock Exchange, with trading in shares commencing on the same day. Full public release of shares followed on 15 December 2010. The share price was set at 295p valuing the company at approximately £215 million, and raising £66 million for the company, half of which will go towards fleet expansion.[5][16] 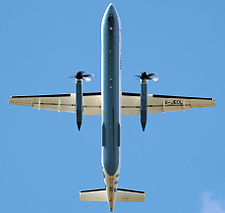 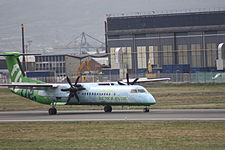 Alternative low cost, but not at any cost green livery

Cabin and onboard service

Flybe employs allocated seating on all flights and passengers have the option to choose a seat online in advance. Economy Plus ticket holders receive a complimentary drink and snack, access to Flybe Executive Lounges, free prebooked seating and priority check-in. For Economy passengers, the airline operates a buy on board programme, called "Deli in the Sky", offering food and drinks for purchase.

The airline offers gifts and fragrances for sale on all flights, as well as duty free cigarettes and spirits on flights to destinations that are outside of the European Union, including Jersey and Guernsey.[23] Onboard sales are an important part of the airline's ancillary revenue.

Flybe carried over 6.7 million passengers during 2010, a 0.4% increase compared with 2009.[4] As per the CAA's April/May 2009 passenger statistics, Flybe is now the UK's largest domestic airline (26% of total UK domestic passengers that flew during April chose a Flybe-branded flight, 3% more than those who chose an easyJet-branded flight). It carried 451,413 domestic passengers during April 2009, excluding franchise flights operated by Loganair. This puts Flybe in pole position among the UK's domestic carriers, ahead of easyJet, British Airways, BMI Group and Ryanair. During that period Flybe also became Gatwick's leading domestic operator.[24]

A joint-venture with Finnair was announced in 2011. The company is called Flybe Nordic and it started operations 30 October 2011, when Finncomm Airlines was renamed as Flybe Nordic as a result of ownership change. Route structure of the airline consists of franchise routes operated for Finnair and Flybe Nordic own routes under BE- code. Also flights with BE- designator are code-shared with Finnair. Developments in the company have already started as published by Airliner World[25]

Flybe operates many flights in Scotland through a franchise agreement with Loganair.

Flybe has codeshare agreements with several airlines, including:

Flybe advertise flights from Leeds Bradford Airport on the side of a Leeds taxi, seen outside the University of Leeds in 2010.

In 2008, in order to avoid losing a £280,000 rebate from Norwich Airport, Flybe hired 172 actors as "fake passengers" on 11 flights to Dublin.[31][32][33] As a result the environmental group Friends of the Earth called on the government to launch an investigation into the aviation industry.[34]