Nunavik
Not to be confused with the Canadian territory of Nunavut. 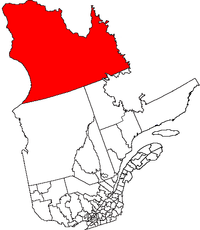 Nunavik (Inuktitut: ᓄᓇᕕᒃ) comprises the northern third of the province of Quebec, Canada. Covering a land area of 443,684.71 km² (171,307.62 sq mi) north of the 55th parallel, it is the homeland of the Inuit of Quebec. Almost all of the 11,627 inhabitants (2006 census) of the region, of whom 90% are Inuit,[1] live in fourteen northern villages on the coast of Nunavik and in the Cree reserved land (TC) of Whapmagoostui, near the northern village of Kuujjuarapik.

Nunavik means "place to live" in the local dialect of Inuktitut and the Inuit inhabitants of the region call themselves Nunavimmiut. Until 1912, the region was part of the District of Ungava of the Northwest Territories.

Negotiations for regional autonomy are underway, and it is possible that Nunavik will become a self-governing region within the province of Quebec, with outstanding land claims resolved, in 2011.[2][3] The seat of government is to be Kuujjuaq.[4] 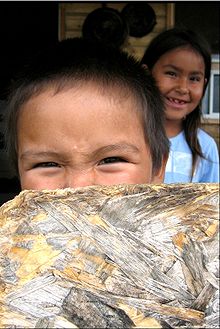 Nunavik is a vast territory, larger than the U.S. state of California, located in the northernmost part of Quebec. It lies in both the Arctic and subarctic climate zones. All together, about 11,000 people live in Nunavik's communities, and this number may be growing.

Nunavik is separated from Nunavut Territory by Hudson Bay to the west and Hudson Strait and Ungava Bay to the north. Nunavik shares a border with the Côte-Nord region of Quebec and the Labrador region of the province of Newfoundland and Labrador. The Ungava Peninsula forms the northern two-thirds of the region.

Nunavik has fourteen villages, populated by an Inuit majority.[citation needed] The principal village and administrative centre in Nunavik is Kuujjuaq, on the southern shore of Ungava Bay; the other villages are Inukjuak (where the film Nanook of the North was shot), Salluit, Puvirnituq, Ivujivik, Kangiqsujuaq, Kangiqsualujjuaq, Kangirsuk, Tasiujaq, Aupaluk, Akulivik, Quaqtaq, and Umiujaq. The village population (census 2006) ranges from 2,132 (Kuujjuaq) to 174 (Aupaluk).

There are no road links between Nunavik and southern Quebec, although the Trans-Taiga Road of the Jamésie region ends near the 55th parallel on the Caniapiscau Reservoir, several hundred kilometers south of Kuujjuaq. There is a year-round air link to all villages and seasonal shipping in the summer and autumn. Parts of the interior of southern Nunavik can be reached using several trails which head north from Schefferville.

Federal government geopolitical manoeuvrings forced several Inuit families to leave Nunavik in the 1950s. They were transported to barren hamlets at Grise Fiord and Resolute in what is now Nunavut in an effort to assert sovereignty in the High Arctic during the Cold War. Eight Inuit families from Inukjuak, Quebec (on the Ungava Peninsula) were relocated after being promised homes and game to hunt, but the relocated people discovered no buildings and very little familiar wildlife.[5] They were told that they would be returned home to Nunavik after a year if they wished, but this offer was later withdrawn as it would damage Canada's claims to sovereignty in the area and the Inuit were forced to stay. Eventually, the Inuit learned the local beluga whale migration routes and were able to survive in the area, hunting over a range of 18,000 km² (6,950 mi²) each year.[6]

In 1993, the Canadian government held hearings to investigate the relocation program. The Royal Commission on Aboriginal Peoples issued a report the following year entitled The High Arctic Relocation: A Report on the 1953-55 Relocation.[7] The government paid $10 million CAD to the survivors and their families, and finally apologized in 2010.[8]

The whole story is told in Melanie McGrath's The Long Exile: A Tale of Inuit Betrayal and Survival in the High Arctic.[9]

Nunavik, along with the James Bay region (or Jamésie), is part of the administrative region of Nord-du-Québec.

The Makivik Corporation, headquartered in Kuujjuaq, represents the Inuit of Northern Quebec in their relations with the governments of Quebec and Canada. They are seeking greater political autonomy for the region and have recently negotiated an agreement defining their traditional rights to use the resources of the offshore islands of Nunavik, all of which are part of the Territory of Nunavut.

The Cree village of Whapmagoostui, which forms an enclave on the eastern shore of Hudson Bay near the northern village of Kuujjuarapik, is part of the Cree Regional Authority, which itself has been incorporated into the Grand Council of the Crees (Eeyou Istchee). The Naskapi Nation of Kawawachikamach, of the Côte-Nord region to the south of Nunavik, owns an exclusive hunting and trapping area in southern Nunavik and is represented in the Kativik Regional Government.

The governments of Quebec and Canada and Nunavik have recently negotiated an agreement to establish a Regional Government of Nunavik. While Quebec and Canada would still maintain full jurisdiction over the area, the Nunavik government will have an elected parliamentary-style council and cabinet, and a public service funded by the province and responsible for delivering certain social services such as education and health. The regional government will also have rights to the region's natural resources, including royalties from the various mines in the region.

The government will be based on territory, not ethnicity, so that all people residing in Nunavik can be full participants.[10] Existing government structures, such as the Kativik Regional Government, Kativik School Board, and Nunavik Regional Board of Health and Social Services, will be folded into the new regional government.

The Quebec government has also expressed a desire to add an additional seat to the National Assembly to represent Nunavik, despite the region's small population. Currently, Nunavik is part of the riding of Ungava, its residents making up just under half of the riding's population. As a riding, Nunavik would be the second least populous in Quebec, slightly more populous than Îles-de-la-Madeleine, which is able to exist as a separate riding under an exception to the laws on population distribution by riding.[11]

Nunavik is rich in mineral deposits.

Raglan Mines, situated near Salluit, is one of the largest. It is linked by all-weather roads to an airstrip at Kattiniq/Donaldson Airport and to the concentrate, storage and ship-loading facilities at Deception Bay. Production began at the mine in 1997. The current mine life is estimated at more than 30 years.[citation needed]

Because the site is situated in the subarctic permafrost region, it requires unique construction and mining techniques to protect the fragile permafrost and to address other environmental issues. The average annual temperature is -10°C with an average ambient temperature underground of -15°C.[citation needed]

There are plans to increase production at a new mine in Raglan South. A major investment is planned in the next quarter as many companies are planning to bid.[citation needed] 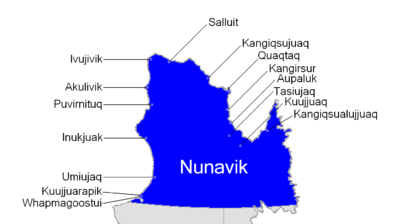