Grand Council of the Crees 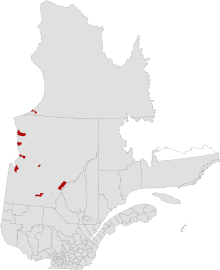 Areas under jurisdiction of the CRA marked in red.

The Grand Council of the Crees (Cree: Iyyu-Isci), or the GCC, is the political body that represents the approximately 16,357 Crees or “Iyyu” (Coastal Dialect)/ “Iynu” (Inland dialect) of the Eeyou Istchee territory in the James Bay and Nunavik regions of Northern Quebec, Canada. The Grand Council has twenty members: a Grand Chief and Deputy-Grand Chief elected at large by the Iyyu, the chiefs elected by each of the nine Cree communities, and one other representative from each community.

The grand chief, Matthew Coon Come, and the deputy grand chief, Ashley Iserhoff, were elected in 2009. The Council’s head office is in the Cree community of Nemaska, with offices in Montreal, Ottawa and Quebec City.

The Council was formed in 1974 in response to the James Bay Cree hydroelectric conflict, which had already been underway since 1971. When the James Bay Project was first announced the Iyyu of Iyyu-Isci were still governed by a traditional political structure. That political structure was organized to exploit the resources of Iyyu-Isci by their traditional hunting, fishing and trapping way of life. Cree lands were divided into family harvesting territories, each headed by a hunting leader or "ucimâw", that were resource management units and a means of distributing the Cree people over a vast territory. So the Cree organized themselves at a council of Cree leaders to represent the Cree and their rights at the negotiations between the Iyyu and the Quebec and Canadian governments, which led to the signing of the James Bay and Northern Quebec Agreement in November 1975.

The Cree Regional Authority (CRA), formed in 1978, serves as the administrative authority of the Crees of Quebec and provides services to the nine Cree communities. The CRA is responsible for environmental protection and is also the legal body representing the Cree to provincial and federal administrations.

While the CRA is a separate legal entity from the GCC, they have identical membership, board of directors, governing structures and are de facto managed and operated as one organization by the Cree Nation.

"Now in 1995, although we live in a modern and democratic state, protected by the Canadian Constitution with its Charter of Rights and Freedoms, our people and our territory may once again be transferred from sovereign to sovereign, this time from Canada to what may become the newly independent state of Québec. And although there is now a United Nations, with a Universal Declaration of Human Rights and a vast array of international human rights instruments that should protect us, a process has been set in motion that would forcibly remove the Crees from Canada, and incorporate us and our lands in this new state."

A few days prior to the October 30, 1995 province-wide referendum on secession from Canada, the Grand Council facilitated a referendum within Cree territory on the question of whether the Crees should be authorized to separate from an independent Quebec, in order to remain part of Canada. Over 96% of participating voters chose to remain in Canada.[2]

Grand Chief Matthew Mukash is considered a traditionalist and fought against the Great Whale hydroelectric project in the 1990s, alongside the Grand Chiefs Matthew Coon Come and Billy Diamond. In 2002, he opposed the signing of the Paix des Braves, a comprehensive 50 year political and economic agreement with the Government of Quebec, and as well as the 2002 and 2004 agreements with Hydro-Québec on the joint development of the hydro-electric resources of the Rupert River.

Elected in late 2005 as Grand Chief, in replacement of Ted Moses, Matthew Mukash is opposed to the Rupert River Diversion which is undergoing joint Quebec-Cree environmental assessment since 2004. Mukash hopes to convince the Government of Quebec and Hydro-Québec to pursue wind power as an alternative source of economic development and energy. His other main political goals are to prepare a Cree constitution, build sovereignty, encourage nation-building, and move Cree leadership back to Cree territory from Montréal and Ottawa.

Cree communities of the Grand Council