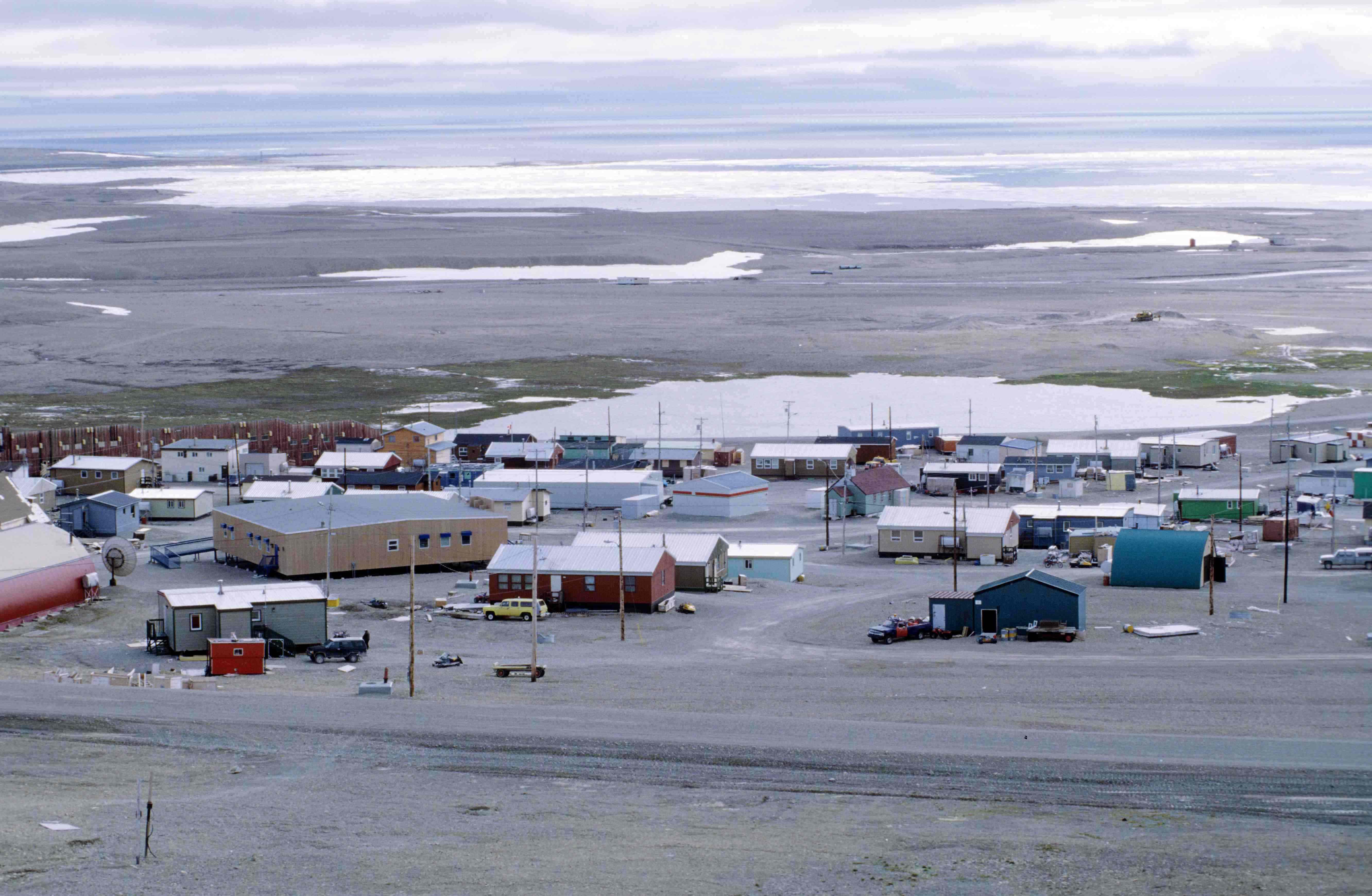 imagesize =
image_caption = Resolute in 1997. Visible on the left is a long residential building (brown) designed by British-Swedish architect. 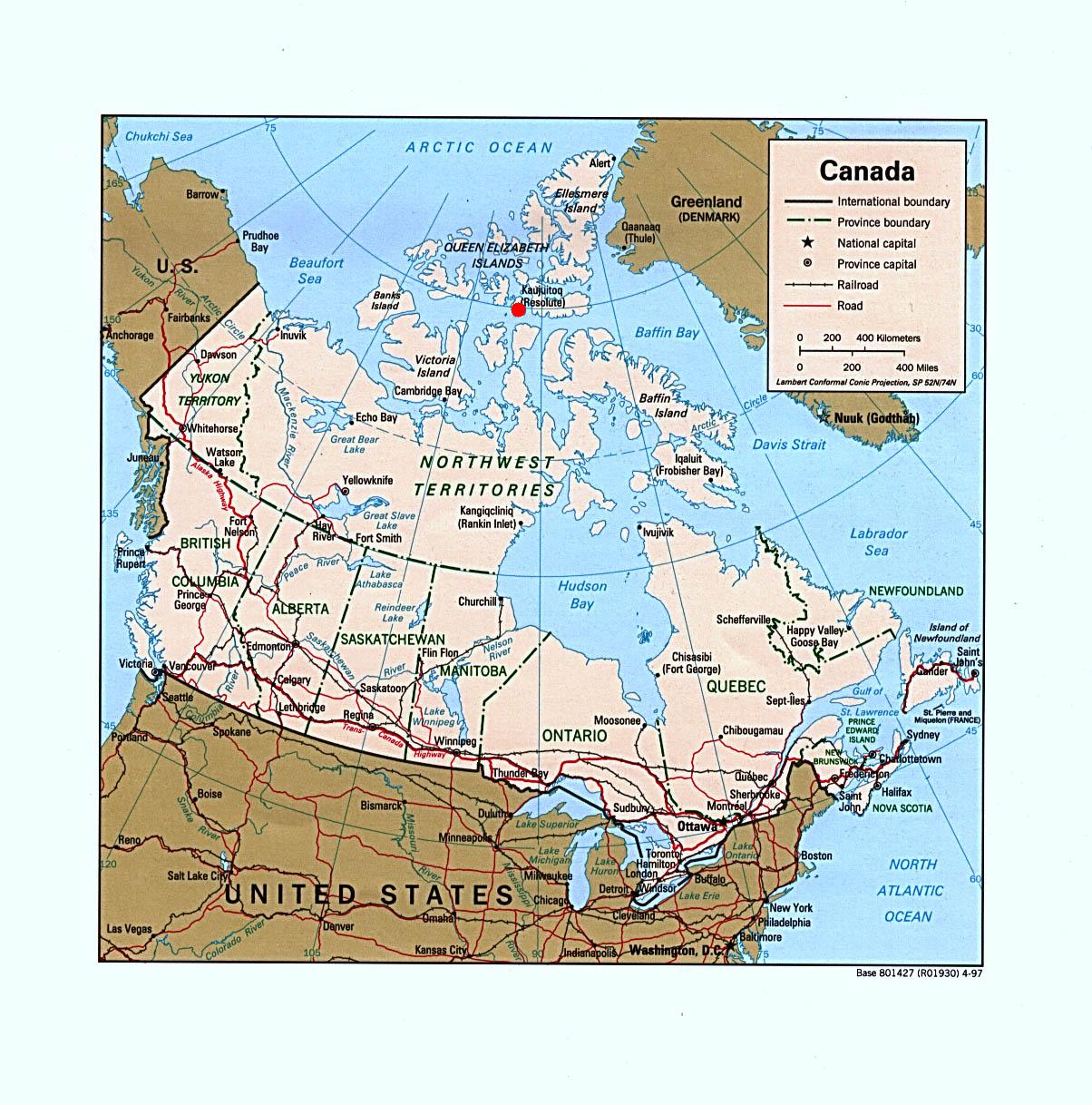 Resolute (: " _iu. Qausuittuq" ("place with no dawn" [The Nunavut Handbook ISBN 1550365878] ), sometimes "Resolute Bay") is a small hamlet on Cornwallis Island in , . It is situated at the northern end of and the and is part of the . The 2008 Road Atlas shows the Inuit name of "Qausuittuq", but the official name remains "Resolute". [ [http://www.gov.nu.ca/english/about/Nunavut%20Communities%20Jan%2008.pdf Government of Nunavut - Communities] ]

Resolute is one of Canada's northernmost communities and is second only to Grise Fiord on (Alert and Eureka are more northerly but are not considered towns—just military outposts and weather stations). It is also one of the coldest inhabited places in the world, with an average yearly temperature of convert|-16.4|C|abbr=on|1.

Founded in 1947 as the site of an airfield and weather station, it was named after HMS|Resolute|1850|6.

Efforts to assert sovereignty in the High Arctic during the , i.e. the area's strategic geopolitical position, led the federal government to forcibly relocate Inuit from northern Quebec to Resolute (and to ). The first group of people were relocated in 1953 from (then known as Port Harrison ) and from . They were promised homes and game to hunt, but the relocated people discovered no buildings and very little familiar wildlife. [ [http://www.grisefiord.ca/eng/history.html Grise Fiord: History] ] They also had to endure weeks of 24 hour darkness during the winter, and 24 hour sunlight during the summer, something that does not occur in northern Quebec. They were told that they would be returned home after a year if they wished, but this offer was later withdrawn as it would damage Canada's claims to sovereignty in the area and the Inuit were forced to stay. Eventually, the Inuit learned the local migration routes and were able to survive in the area, hunting over a range of 18,000 km² (6,950 mi²) each year. [McGrath, Melanie. "The Long Exile: A Tale of Inuit Betrayal and Survival in the High Arctic". Alfred A. Knopf, 2006 (268 pages) Hardcover: ISBN 0007157967 Paperback: ISBN 0007157975] .

In 1993, the Canadian government held hearings to investigate the relocation program. The called the relocation "one of the worst violations in the ". [ "The High Arctic Relocation: A Report on the 1953-55 Relocation" by René Dussault and George Erasmus, produced by the Royal Commission on Aboriginal Peoples, published by Canadian Government Publishing, 1994 (190 pages) [http://www.fedpubs.com/subject/aborig/arctic_reloc.htm] ] The government paid $10 million CAD to the survivors and their families, but as of 2007 has yet to apologize. [cite news
last = Royte
first = Elizabeth
coauthors =
title = Trail of Tears
work = The New York Times
pages =
language =
publisher =
date = 2007-04-08
url = http://www.nytimes.com/2007/04/08/books/review/Royte.t.html?ex=1188964800&en=4b6eb6a89d7e85dd&ei=5070
accessdate = ]

Having lost most traditional skills and purpose, its Inuit residents are now to a large degree dependent on government support. The whole story is told in Melanie McGrath's "The Long Exile: A Tale of Inuit Betrayal and Survival in the High Arctic" [Alfred A. Knopf, 2006 (268 pages) Hardcover: ISBN 0007157967 Paperback: ISBN 0007157975] .

On , , reported that documents showed plans to build an army training centre in the community along with a $60 million deepwater port at Nanisivik. [ [http://www.cbc.ca/canada/north/story/2007/08/08/arctic-setup.html?ref=rss Planned army base, port in North heat up Arctic quest] ]

On , , Prime Minister Stephen Harper announced the construction of a pair of multimillion-dollar military facilities within the contested waters of Canada's Arctic territory. The facilities consist of a new army training centre at Resolute, Nunavut and a deep-sea port at . A statement issued by the Prime Minister says, "The Training Centre will be a year-round multi-purpose facility supporting Arctic training and operations, accommodating up to 100 personnel. Training equipment and vehicles stationed at the site will also provide an increased capability and faster response time in support of regional military or civilian emergency operations." [ [http://www.pm.gc.ca/eng/media.asp?category=1&id=1784 Prime Minister Announces Expansion of Canadian Forces Facilities amd Operations in the Arctic] , Government of Canada news release, 10 Aug 07.]

Although not as busy as it once was, is still the core of the town, serving as an aviation hub for exploration in the region and connected by direct service to and Cambridge Bay. The Tadjaat Co-op runs a grocery and retail store, a hotel, a restaurant, cable TV service, Internet, snowmobile rental, and an airport gift shop.

The town has three hotels - Narwhal Inn, Qausuittuq Inns North and South Camp Inn - which have fewer than 100 rooms each, and several lodges. Other facilities include a station, a school (which provides education from kindergarten to Grade 12) and a gym.

Resolute is the starting point for both the and the , in which teams race the convert|350|nmi|km|0|abbr=off|lk=on to the .

In 2007, the British television team Top Gear embarked from Resolute and became the first team to reach the magnetic north pole on automobiles, with and reaching the Pole in a UK plated 2007 3.0 litre Diesel heavily modified by an ic team on a mixture of and , against who was being pulled by a team of s. [ [http://www.express.co.uk/posts/view/13538/Top-Gear-team-in-hot-water-over-Pole-race Top Gear Team in Hot Water Over Pole Race] ]