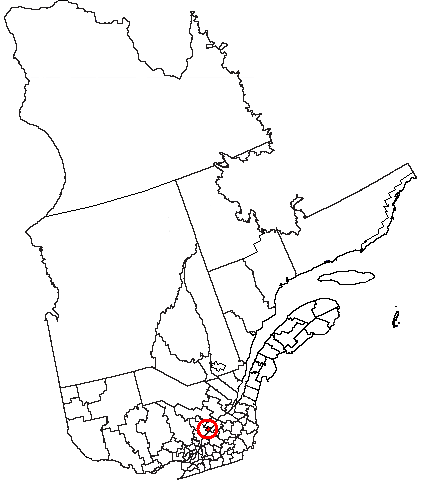 Trois-Rivières is a in the region of , , located along the densely populated at the confluence of the Saint-Maurice and Saint Lawrence rivers. It was founded in 1634, the second permanent settlement in . The current city was created in 2002 from the merging of six towns : Cap-de-la-Madeleine, Pointe-du-Lac, Sainte-Marthe-du-Cap, Saint-Louis-de-France, Trois-Rivières and Trois-Rivières-Ouest.

The city is named for the fact that the Saint-Maurice River, which is divided by two small islands at the river's opening, has three mouths at the St. Lawrence. The city's logo also illustrates this.

Trois-Rivières is also the name of a territory equivalent to a regional county municipality (TE) of , coextensive with the city of Trois-Rivières. Its geographical code is 371.

Trois-Rivières is the economic and cultural hub of the region. It lies at the halfway point between and , on the north shore of the across from the city of Bécancour. It was founded on , , the second permanent settlement in , after Quebec city in 1608. Its location at the three-pronged mouth of the is the source of its name, which is French for "three rivers". Historically, Trois-Rivières was sometimes referred to in English as Three Rivers, although in modern times it is always referred to as Trois-Rivières in both English and French. The anglicized name still appears in many areas of the town (e.g., the city's Three Rivers Academy), bearing witness to the influence of English settlers in the town. The city's inhabitants are known as "Trifluviens" (Trifluvians).

Trois-Rivières has been a world capital of the industry since the 1930s; the city's other prominent industries include metal transformation, , , as well as the production of s and . An industrial park adjoining also serves as a major centre for the aeronautical industry.

The city's main street is Boulevard des Forges, an area several blocks long in the heart of the Old City composed of century-old buildings housing a great variety of cafés, restaurants, clubs, bars, and shops. In the warmer months, the area is regularly closed to vehicular traffic to accommodate various festivals and events, turning the downtown core into a pedestrian mall. Trois-Rivières is officially the "National Poetry Capital of Quebec"; numerous plaques displaying poetic verses are installed across the centre of the city, and its International Festival of Poetry (held each year in the first week of October) honours this title.

Trois-Rivières has an internationally known racetrack named . The track hosts series, , and the events. [ [http://www.gp3r.com Grand Prix de Trois-Rivières ] ] Notable landmarks include the , a dating back to the 1730s, the Monastery, and .

For a long time, the area that would later become known as Trois-Rivières was frequented by s who used it as a summer stopping place. The French explorer described the site while on his second journey to the New World in 1535. The name "Trois-Rivières", however, was only given in 1599, by a certain Captain Dupont-Gravé, and first appeared on maps of the area in 1601 [ [http://laville.v3r.net/docs_upload/documents/langue1/renseignements_/Guide_du_citoyen_2007.pdf untitled ] ] .

In 1603, while surveying the Saint-Lawrence River, recommended establishing a permanent settlement in the area, which was finally done on , by the Sieur of . The city was second to be founded in (after , before ) and played an important role in the colony and in the fur trade, thanks to its strategic location. The settlement became the seat of a regional government in 1665. Ursuline nuns first arrived at the settlement in 1697, establishing the first school and helping local missionnaries to Christianize the local Aboriginals and .

French sovereignty in Trois-Rivières continued until 1760, when the city was captured as part of the British conquest of Québec. Sixteen years later, on , , it was the theatre of the (part of the ill-fated Invasion of the province of Québec by Americans from the area—"les Bostonnais") during the .

Trois-Rivières continued to grow in stature throughout the period and beyond; in 1792 it became the seat of a judicial district, and that of a Roman Catholic in 1852.

The greater part of the city of Trois-Rivières was destroyed by a fire in 1908. The majority of the city's original buildings, many of which dated back to French colonial years, were destroyed. Only a few were spared, including the Ursuline Monastery and the De Tonnancour Manor. As a result of the destruction, a major redesign and renovation of the city was undertaken, including the widening and renewal of many of the city's roads. As well, many new businesses and industries became established in the town, which attracted many new residents.

In the 1960s, Trois-Rivières undertook a large-scale project of economic diversification, including the establishment of several cultural institutions and attractions. The Old City of Trois-Rivières was declared an "historic sector" in 1964. The , linking Trois-Rivières to Bécancour and the south shore of the Saint-Lawrence River, was inaugurated on , . Finally, in 1969, the city appeared on Canada's academic map with the inception of the , known for its school, its podiatric medical education and its excellent programs for primary and secondary school education.

Although historically an important center of commerce, trade and population, Trois-Rivières has relinquished much of its earlier importance to the two major cities of Quebec, the metropolis of and of . It does, however, remain one of the principal medium-sized cities of Quebec, along with , Sherbrooke and .

Prior to amalgamation in 2001, the new city of Trois-Rivières was divided among six municipalities.