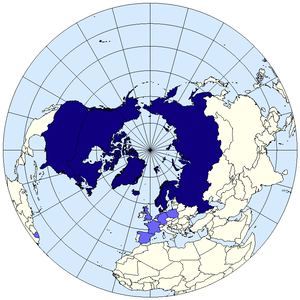 The Arctic Council is a high-level intergovernmental forum which addresses issues faced by the Arctic governments and the indigenous people of the Arctic.

History of the Arctic Council

The first step towards the formation of the Council occurred in 1991 when eight Arctic countries signed the Arctic Environmental Protection Strategy (AEPS). The Ottawa Declaration of 1996 formally established the Arctic Council as a high level intergovernmental forum to provide a means for promoting cooperation, coordination and interaction among the Arctic States, with the involvement of the Arctic Indigenous communities and other Arctic inhabitants on common Arctic issues, in particular issues of sustainable development and environmental protection in the Arctic. The Ottawa Declaration named eight members of the Arctic Council: Canada, Russia, Norway, Denmark, Iceland, the United States, Sweden and Finland. The Arctic Council has conducted several studies on climate change, oil and gas, and Arctic shipping.[1]

Only states with territory in the Arctic -of which there are eight- can become member of the Council. As all eight are members, the Arctic Council is a true circumpolar forum.

Observer status in the Arctic Council is open to non-Arctic states that the Council determines can contribute to its work. Currently six non-Arctic states have the status of Permanent Observer: France, Germany, the Netherlands, Poland, Spain and the United Kingdom. Observer states receive invitations for most meetings of the Council, such as the Meetings of Senior Arctic Officials (SAO-Meetings), the Ministerial Meetings, and many of the Working Group meetings. Their participation in projects and task forces within the Working Groups is not always possible, but this poses few problems as few Observer States show an interest to participate at such a detailed level. Ad-hoc observer States, of which there are four plus the European Union, need to request permission for their presence at each individual meeting. Such requests are mostly granted as a matter of routine.

Only the Ministerial Meetings (once every 2 years) can decide on the granting of full observer status to ad-hoc applicants. At the last Ministerial Meeting in Tromsø (Norway) in April 2009 the requests for full Observer status from China, the EU, Italy and Korea were not granted, basically because the 8 member states do not have a shared vision about the role of Observer States. Since then Japan has joined the ranks of Ad-hoc Observer States. The upcoming Ministerial Meeting of the Council in spring 2011 in Nuuk (Greenland) will decide anew on these Observer applications. In the meantime, the Danish Chairmanship has sent out questionnaires to all six permanent and five Ad-hoc Observers for them to explain their interest in the Arctic and in the Arctic Council; to show what they can contribute to the Arctic Council, and to provide a list of their Arctic activities. It is hoped that on this basis the Member States can come to agreement on how to deal with the increased interest in Arctic affairs by non-Arctic nations.

The indigenous Permanent Participants (PP's) also have mixed views with regard to a growing group of non-Arctic Observer nations. Some of them fear that their roles will be marginalized if large players such as China and the EU will receive more attention.

Permanent Participants may address the meetings. They may raise points of order that require immediate decision by the Chairman. Agendas of Ministerial Meetings need to be consulted beforehand with them; they may propose supplementary agenda items. When calling the twice-yearly meetings of Senior Arctic Officials, the Permanent Perticipants must have been consulted beforehand. Finally, Permanent Participants may propose cooperative activities, such as projects. All this makes the position of Arctic indigenous peoples within the Arctic Council quite unique compared to the (often marginal) role of such peoples in other international governmental fora. However, decision making in the Arctic Council remains in the hands of the eight member states, on the basis of consensus.

As of 2010, six Arctic indigenous communities have the status of Permanent Participants (or PP's) on the Council. These groups are represented by the Aleut International Association,[3] Arctic Athabaskan Council,[4] Gwich'in Council International,[5] Inuit Circumpolar Council, Russian Association of Indigenous Peoples of the North (RAIPON),[6] and the Saami Council.[7]

These indigenous organisations differ widely as to the number of people they represent and in their organisational capacities. RAIPON represents some 250.000 indigenous people of various (mostly Siberian) tribes; the ICC some 150.000 Inuit. But the Gwich'in Council and the Aleut Association each represent only a few thousand people. It is obviously quite costly for these groups to be represented at each and every meeting of the Council, especially since the meetings take place in towns and villages within the entire circumpolar realm. To enhance the capacity of the PP's to pursue the objectives of the Arctic Council and to assist them develop their internal capacity to participate and intervene in the Arctic Council meetings, the Council has established (and provides financial support to) the "Indigenous Peoples' Secretariat" (IPS).[8] The Board of the IPS decides on the allocation of funds. The IPS is located in Copenhagen.

However prominent the role of Arctic indigenous peoples in the Arctic Council, their status as Permanent Participant does not confer onto them any legal recognition as peoples. The Ottawa Declaration, by means of which the Arctic Council was established, makes this very explicit by stating (in a footnote): "The use of the term "peoples" in this declaration shall not be construed as having any implications as regard the rights which may attach to the term under international law". Indeed, the United Nations Declaration on the Rights of Indigenous Peoples, adopted by the UN General Assembly on 13 September 2007 after 22 years of negotiations, was rejected by Canada and the United States, while Russia abstained.[9] This means that the overwhelming majority of Arctic indigenous people is not covered by this UN Declaration.

The Arctic Council convenes approximately every six months at a site within the host Chair's nation for a Senior Arctic Officials (SAO) meeting. SAO's are high level representatives of each of the eight member nations – sometimes Ambassadors, often just senior foreign ministry officials entrusted with staff-level coordination. Representatives of the six Permanent Participants and the official Observers also are in attendance.

At the end of the two-year cycle, the Chair hosts a Ministerial-level meeting, which is the culmination of the Council's work for that period. Most of the eight member nations are represented by a Minister from their Foreign Affairs, Northern Affairs or Environment Ministry.

A formal, though non-binding, "Declaration", named for the town in which the Ministerial meeting is held, is announced, which generally sums up the past accomplishments and the future work of the Council. These Declarations cover the main topical areas that the Council is concerned with, including climate change, sustainable development, Arctic monitoring and assessment, persistent organic pollutants (POPs) and other contaminants in the Arctic, and the work of the five Working Groups of the Council. The last Ministerial meetings took place October 26, 2006 in Salekhard, Russia and April 29, 2009 in Tromsø, Norway. A Ministerial meeting in was held in Nuuk, Greenland on May 12, 2011. This is the first meeting since the establishment of the Arctic Council back in 1996, United States have sent representatives. Representing the United States is Secretary of State, Hillary Rodham Clinton.

Coordinating the Work of the Arctic Council

Each rotating Chair nation accepts responsibility for creating a secretariat, which handles overall coordination of Council activity, which includes organizing the semi-annual meetings, hosting the Council website, and distribution of the various reports and documents pertinent to the work of the Council. Several of the member nations would like to establish a permanent Secretariat, but this idea has been consistently vetoed by the United States since the inception of the Council. The Norwegian Polar Institute in Tromsø hosts the Arctic Council Secretariat for the 6-year period from 2007–2013; this is based on an agreement between the three successive Scandinavian Chairs (Norway, Denmark and Sweden). This temporary Secretariat has a staff of 3.

In addition, the Arctic Council works through six Working Groups and four Programs and Action Plans:

In 2011, the Council member states concluded the Arctic Search and Rescue Agreement, the first binding treaty concluded under the Council's auspices.