Laval (French pronunciation: [laˈval]) is a Canadian city and a region in southwestern Quebec. It is the largest suburb of Montreal, the third largest municipality in the province of Quebec, and the 14th largest city in Canada with a population of 368,709 in 2006.[1] In 2011, the population of the suburb is estimated at 398,667.

Laval constitutes region 13 of the 17 administrative regions of Quebec as well as a territory equivalent to a regional county municipality (TE) and census division (CD) with geographical code 65. It also constitutes the judicial district of Laval.[2]

The first European Settlers were Jesuits in 1636 when they were granted a seigneury there. Agriculture first appeared in Laval in 1670. In 1675, François de Montmorency-Laval gained control of the seigneury. In 1702 a parish was founded, and dedicated to Saint-François de Sales. The first municipalities on the island were created in 1845, after nearly 200 years of a rural nature. The only built-up area on the island, Sainte-Rose, was incorporated as a village in 1850, and remained as the main community for the remainder of the century. With the dawn of the 20th century came urbanization. Laval-des-Rapides became Laval's first city in 1912, followed by L'Abord-à-Plouffe being granted village status three years later. Laval-sur-le-Lac was founded in the same year on its tourist-based economy from Montrealers. Laval began to grow throughout the following years, due to its proximity to Montreal that made it an ideal suburb.

To deal with problems caused by urbanization, amalgamations occurred; L'Abord-à-Plouffe amalgamated with Renaud and Saint-Martin creating the city of Chomedey in 1961. The amalgamation turned out to be so successful for the municipalities involved that the Quebec government decided to amalgamate the whole island into a single city of Laval in 1965. Laval was named after the first owner of Île Jésus, François de Montmorency-Laval, the first Roman Catholic Bishop of Quebec. At the time, Laval had a population of 170,000. Laval became a Regional County Municipality in 1980. Prior to that, it was the County of Laval.[3]

The 14 municipalities, which existed prior to the incorporation of the amalgamated City of Laval on August 6, 1965, were:

The island has developed over time, with most of the urban area in the central region and along the south and west river banks.

In 2001, 15.48% of Laval's population was born outside of Canada, a lower percentage than the national average, but higher than that for Quebec. Many immigrants have come to the city from the French-speaking Caribbean, the Middle East, North Africa, and Europe. Those of indigenous origin constitute 0.22%, while those who are visible minorities (non-white/European) number 8.68%, and are chiefly Black Canadian, Arab, and Hispanic. Like Quebec as a whole, the city is overwhemingly Christian (90.71%), particularly Roman Catholic (81.09%), while Protestant and Orthodox groups constitute the remainder of the population. Religions such as Islam, Judaism, Buddhism, and others total less than 5% of the population combined.

As of March 2009, Laval was the main destination for immigrants to Canada, according to a study released by the Federation of Canadian Municipalities (FCM). The report says that between 2001 and 2006, the immigrant population grew by 40% in Laval, while the national average stood at 15% [1].

Laval is not quite as linguistically diverse as neighbouring Montreal. The 2006 census found that, counting both single and multiple responses, French was spoken as a mother tongue by 68.4% of the population, and was spoken most often at home by 73.8% of Laval residents.[7] Counting single responses only, the next most common mother tongues were English (6.9%), Italian (4.4%), Greek and Arabic (3.9% each), Spanish (2.2%) and Armenian (1.8%).[8]

As of 2009, Gilles Vaillancourt is the mayor of the city of Laval. He has been in office since 1989.[9] Vaillancourt's party, the Parti PRO des Lavallois, was born in 1980. Vaillancourt took over as head of the party just before the 1989 municipal elections.[10]

Past mayors have been:

On a white-yellow background, the emblem of Laval illustrates the modernism of a city in full expansion. The sign of the city symbolizes the "L" of Laval.

The colours also have a significant meaning :

The "L" of Laval is made of cubes that represent the development of Laval.

The letters of the Laval signature are related one to the other to point out the merger of the 14 municipalities of Jesus island in 1965.

Politically, Laval is a battleground area between the Quebec separatist parties (the Bloc Québécois federally and the Parti Québécois provincially) and the federalist parties (the Liberal Party of Canada and the Quebec Liberal Party). The only exception is Chomedey in the south, which voted overwhelmingly to not separate in the 1995 Quebec referendum. The other parts of Laval were narrowly split.

Laval's diverse economy is centred around the technology, pharmaceutical, industrial and retail sectors. It has many pharmaceutical laboratories but also stone quarries and a persistent agricultural sector. Long seen as a bedroom community, Laval has diversified its economy, especially in the retail sector, developing numerous shopping malls, warehouses and various retail stores. Laval has four different industrial parks.[12]

The first is Industrial Park Centre, in the heart of Laval at the corner of St. Martin West and Industriel Blvd. It is One of the largest municipal industrial parks in Quebec, the Industrial Park Centre boasts the highest concentration of manufacturing companies in Laval; 1,024 at last count, and 22,378 employees. The park still has 1,300,643 m² of space available.

The second, the Autoroute 25 Industrial Park is at the crossroads of the metropolitan road network. Inaugurated in 2001, this new industrial municipal space has been a tremendous success, boasting an 80% occupancy rate. Laval is studying the possibility of expanding this park in the next few years.

The third, known as Industrial Park East, is in the neighbourhood of Saint-Vincent-de-Paul. This park has reached full capacity with a 100% occupancy rate. Industrial Park East is currently part of a municipal program to revitalize municipal services and public utilities. Laval is working with a private developer on an expansion project for the park that should be announced in the near future.

Created in 1995, Laval Technopole is a nonprofit organization that has the objective to promote the economic growth of Laval by attracting and supporting new business and investments located in its 5 territory poles: Biopole, e-Pol, Agropole, industrial pole and Leisure/tourism.

Alimentation Couche-Tard has its headquarters in Laval.[13]

Laval was also host-city of the "Jeux du Québec" held in summer 1991. 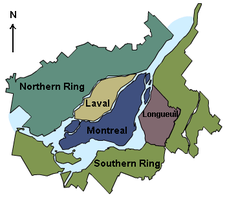 The Metropolitan Community of Montreal 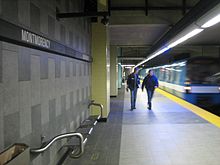 A train arriving at Montmorency station in the Montreal Metro.

The Agence métropolitaine de transport (AMT) operates two commuter train lines on the island. The Deux-Montagnes and Blainville-Saint-Jerome lines connect Laval to downtown Montreal in as little as 30 minutes. Including De la Concorde, there are currently five train stations.

A Google Map of the subway system, including the three new Laval stations can be viewed at Montreal-Laval Subway Map Mashup.

Laval is home to a variety of vocational/technical centres, colleges and universities, including: 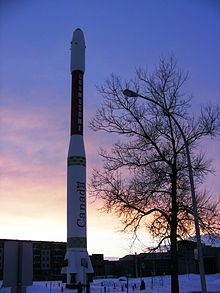 The Cosmodome is a major local attraction. 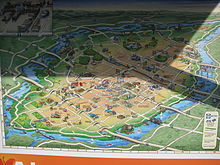 Laval is served by media from Montreal, however it does have some of its own regional media outlets.

One television network operates on Laval's territory, Télévision régionale de Laval, on the VOX network (only available on Videotron cable).