The university has Quebec's largest sponsored research income and the fourth largest in Canada,[5] allocating close to $447.2 million to research conducted in more than 150 research centres as of 2007.[6] It is also part of the U15 universities. More than 55,000 students are enrolled in undergraduate and graduate programs, making it the second largest university in Canada in terms of student enrollment.[2]

As an institution, the university was first founded when the Université Laval in Quebec City founded a new branch in Montréal in 1878, which became known as the Université de Laval à Montréal.[7] This initially went against the wishes of Montréal's prelate, who advocated an independent university in his city.[8] Certain parts of the institution's educational facilities, such as those of the Séminaire de Québec, had already been established in Montréal as early as 1876.[9] The Vatican granted the university some administrative autonomy in 1889, thus allowing it to choose its own professors and license its own diplomas. However it was not until May 8, 1919 that a papal charter from Pope Benedict XV granted full autonomy to the university.[10] It thus became an independent Catholic university and adopted Université de Montréal as its name.[11] Laval composed by Wilfrid Beaudry was dedicated to the students at Laval University and the University of Montréal. The music for piano was published in Québec by J. Beaudry, circa 1906.[12]

At the time of its creation, less than a hundred students were admitted to the university's three faculties, which at that time were located in Old Montreal. These were the faculty of theology (located at the Grand séminaire de Montréal), the faculty of law (hosted by the Society of Saint-Sulpice) and the faculty of medicine (at the Château Ramezay).[13][14]

Graduate training based on German-inspired American models of specialized course work and completion of a research thesis was introduced and adopted.[9] Most of Québec's secondary education establishments employed classic course methods of varying quality. This forced the university to open a preparatory school in 1887 to harmonize the education level of its students. Named the "Faculty of Arts", this school would remain in use until 1972 and was the predecessor of Québec's current CEGEP system.[15]

Although a branch of Laval University was planned as Montreal's first French-language university, it was not until February 14, 1920, that the first provincial charter founding the university was passed.[10] The second provincial charter was passed in 1950.[10] The policy of university education initiated in the 1960s (following the Quiet Revolution) was a response to popular pressure and the belief that higher education was a key to social justice and economic productivity for individuals as well as society.[9] The third provincial charter, which was passed in 1967, defined the Université de Montréal as a public institution, dedicated to higher learning and research, in the administration of which students and teachers would have the right to participate.[10] 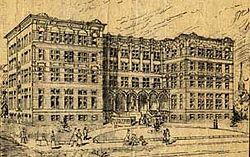 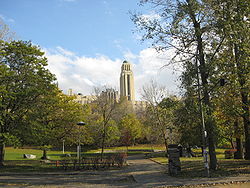 A view of the present Roger Gaudry building, built in 1943 and designed by Ernest Cormier, on Mont-Royal.

From 1876 to 1895, most university classes took place in the Grand séminaire de Montréal. From 1895 to 1942, it was housed in a building at the intersection of Saint-Denis and Sainte-Catherine streets in Montreal's eastern downtown Quartier Latin.

Unlike English language universities in Montréal, such as McGill University, the university suffered a lack of funding for two major reasons: the relative poverty of the French Canadian population and the complications ensuing from its remote management from Quebec City. The downtown campus was hit by three different fires between 1919 and 1921, further complicating the university's already precarious finances and forcing it to spend much of its resources on repairing its own infrastructure.[16]

By 1930, enough funds had been accumulated to start the construction of a new campus on the north west slope of Mount Royal, adopting new plans designed by Ernest Cormier. However, the financial crisis of the 1930s virtually suspended all ongoing construction.[17] Many speculated that the university would have to sell off its unfinished building projects in order to ensure its own survival. Not before 1939 did the provincial government directly intervene by injecting public funds.[18] Campus construction subsequently resumed and the mountain campus was officially inaugurated on June 3, 1943.[19] The university's former downtown facilities would later serve Montreal's second francophone university, the Université du Québec à Montréal (UQAM).

In 1943, the university assisted the Western Allies by providing laboratory accommodations on its campus. Scientists there worked to develop a nuclear reactor, notably by conducting various heavy water experiments. The research was part of the larger Manhattan Project, which aimed to develop the first atomic bomb. Scientists here managed to produce the first atomic battery to work outside of the United States. One of the participating Québécois scientists, Pierre Demers, also discovered a series of radioactive elements issued from Neptunium.[20] 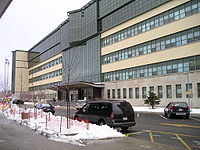 École Polytechnique as it stands today.

Two distinct schools eventually became affiliated to the university. The first was the École Polytechnique, a school of engineering, which was founded in 1873 and became affiliated in 1887. The second was the École des Hautes Études Commerciales, or HEC, which was founded in 1907 and became part of the university in 1915.[13] The first francophone school of architecture in Canada opened in 1907 at the École Polytechnique.[21]

Between 1920 and 1925, seven new faculties were added to the initial three: Philosophy, Literature, Sciences, Veterinary medicine, Dental surgery, Pharmacy and Social sciences.[16] Notably, the Faculty of Social sciences was founded in 1920 by Édouard Montpetit, the first laic to lead a faculty.[22] He thereafter fulfilled the role of secretary-general until 1950.

In 1965, the appointment of the university's first secular rector, Roger Gaudry, paved the way for modernization. The university established the first adult education degree program offered by a French Canadian university in 1968.

Since 2002, the university has embarked on its largest construction projects since the late 1960s, with five new modern buildings planned for advanced research in pharmacology, engineering, aerospace, cancer studies and biotechnology.[13] 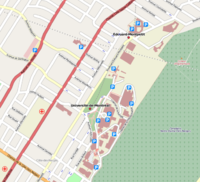 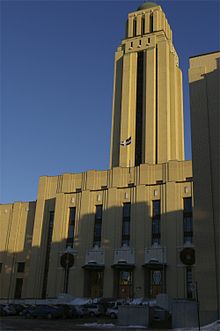 The university's main campus is located on the northern slope of Mont-Royal in the Outremont and Côte-des-Neiges boroughs. Its landmark Pavilion Roger-Gaudry , which was designed by the noted architect Ernest Cormier, can be seen from around the campus and is known for its imposing tower. It is built mainly in the Art Deco style, with some elements of International style.

The campus is served by the Côte-des-Neiges, Université-de-Montreal, and Édouard-Montpetit metro stations.

Apart from its main Mont-Royal campus, the university also maintains four regional facilities in Lanaudière, Laval, Longueuil, Québec and Mauricie.[23] The campus in Laval, just north of Montréal, was opened in 2006. It is Laval's first university campus, and is located in the area near the Montmorency metro station. In October 2009, the university announced an expansion to its Laval satellite campus with the commissioning of its six-storey Cité du Savoir complex.[24] In order to solve the problem of lack of space on its main campus, the university is also planning to open a new campus in Outremont.[25]

There are various student groups, clubs and associations on the university's campus, the largest of them being the FAÉCUM, a federation of students' unions.

The campus offers various student-run newspapers, the largest being Quartier Libre, a member of the Canadian University Press (CUP). The campus also has its own student-run radio station, CISM-FM. 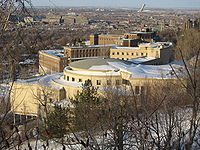 Several research-dedicated organizations can also be found on the university's campus, such as the Centre for International Studies and the Centre de Recherches Mathématiques.

The university is represented in Canadian Interuniversity Sport by the Carabins. The Carabins, whose origins date back to 1922,[38] currently rank among the top 10 university teams in Canada. The organization has over 350 student athletes organized in 17 different teams and 10 disciplines: badminton, football, golf, swimming, alpine skiing, soccer, tennis, hockey, cheerleading and volleyball. Following the establishment of a Club of Governors in June 2002, the Carabins are now partly financed through private funds. Initially led by Formula One Grand Prix president Normand Legault, the Club is composed of various business personalities and is currently headed by Rona CEO Robert Dutton.

On January 31, 2008, the Carabins announced the creation of its first female hockey team, which after training and preparation should officially start competing by fall 2009.[38]

An Order of Merit is appointed to particularly successful alumni on annual basis.[39]