Chambly is a city in southwestern Quebec, Canada, about 25 km (16 mi) to the south east of Montreal.

People have lived in Chambly since the 17th century, but Chambly was not incorporated as a city until 1965.

Samuel de Champlain passed through the area that came to be the site of the town of Chambly, QC, in 1609., when he wrote the following in his journal:

Chambly is home to the massive Fort Chambly, built with local stone between 1709 and 1711 in the style of Vauban's classic French fortifications. It was built at the mouth of a large basin, on the site of successive wooden forts dating back to 1665. Fort Chambly was the largest in a series of fortifications on the shores of what was known as the Iroquois River (later known as the Chambly River, finally becoming the Richelieu River in the nineteenth century). Originally called Fort Saint-Louis, it soon came to be known by the name of its first commanding officer, Jacques de Chambly, to whom the surrounding seigniory was granted in 1672. It was intended to protect New France in general (and Montreal in specific) from attack from hostile natives and the English. Today, the fort is run by Parks Canada as a National Historic Site, and houses a museum and interpretive center, and hosts historical re-enactments of military drills (as well as a number of contemporary cultural events).

A small local population clustered around the fort, and the entire area eventually became known as Chambly as well.

Chambly is also known for the Chambly Canal, a National Historic Site run by Parks Canada. It was built in 1843 to bypass several kilometers of successive Richelieu River rapids between the towns of Chambly, QC, and Saint-Jean-sur-Richelieu. Part of a series of waterways connecting the Saint Lawrence River and New York City, Chambly Canal was built to facilitate commercial traffic between Canada and the United States.

Trade dwindled after World War I, and as of the 1970s, traffic has been replaced by recreational vessels. Today the canal is enjoyed by tourists and more than 7,000 pleasure boats in the summer, and ice skaters in the winter. 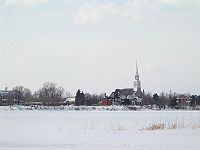 Chambly's Church St-Joseph, viewed in winter from the Basin

The population as of the Canada 2006 Census was 22,608. Although mostly populated today by French Canadians, Chambly has long had a vibrant English citizenry. 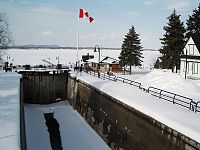 In 2004, Chambly's largest local employers were: