Autoroute 13 (or A-13, also known as Autoroute Chomedey with sections formerly known as Autoroute Mirabel), is a freeway in the urban region of Montreal, Quebec, Canada. Its southern end is at the junction of A-20 on the Island of Montreal near Pierre Elliott Trudeau International Airport. Its northern terminus is at the junction of A-640 near Boisbriand. The road traverses through Laval.

Autoroute 13 was built as a toll highway in 1975 with a goal to connect the two international airports, Mirabel and Dorval (now Trudeau International Airport). Currently, the freeway is mostly six-laned and tolls no longer apply.

Boulevard Pitfield derives its name from the origin of the actual route. In the 1920s, the actual route was a Polo Pony Trail leading from the various estates of the Saraguay Village residents to their Polo Fields, now where the area of St. Laurent Blvd and Bois Franc merge. In the late 1930s the path became an unpaved local road. Over the next several decades Saraguay Farms, owned by Mrs. W.C. Pitfield, was paid to clear the road in the winter by the municipality of St. Laurent. The road was developed into a two-lane highway in the 1960s.

The Quebec provincial government was planning to extend Autoroute 13 north of A-640 in the late 1990s as an alternate route for A-15 (Autoroute Décarie/Autoroute des Laurentides). It is speculated this extension is less of a priority since Mirabel ceased passenger operations in 2004, and the Mirabel site is presently well-served by A-15 and A-50.

Interchanges from south to north 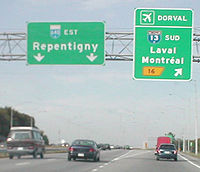