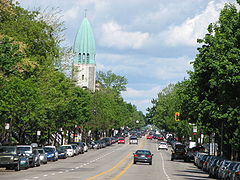 Christophe Colomb Avenue (French: Avenue Christophe-Colomb) is a major north-south street in Montreal, Quebec, Canada. It has a length of 8.5 Kilometres, and crosses the boroughs of Le Plateau-Mont-Royal, Rosemont-La Petite-Patrie, Villeray-Saint-Michel-Parc-Extension and Ahuntsic-Cartierville. The street is predominantly residential south of Villeray Street and is a large urban boulevard to the north.

The street was named after Christopher Columbus on December 20, 1897.

Christophe Colomb Avenue begins at Rachel Street, near Lafontaine Park in the south. It is a prolongation of Parc-Lafontaine Street. It is interrupted by Sir Wilfrid Laurier Park between Laurier Avenue and Saint Grégoire Street for distance of 400 metres. In the north, the street ends at Gouin Boulevard, near Louis Hébert Park and the Rivière des Prairies.