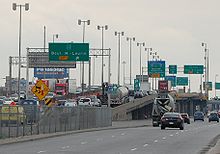 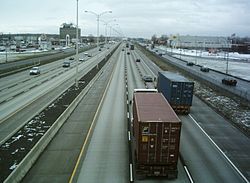 The western terminus of Autoroute 40 is located at the Ontario–Quebec border, where it continues as Highway 417 towards Ottawa; the eastern terminus is in Boischatel, where it transitions into Route 138 at the end of the freeway.

Two sections of Autoroute 40 were not part of the original plans: The original intention was to bypass Trois-Rivières to the north (the existing A-40 through downtown would have been Autoroute 755 and the concurrency with Autoroute 55 would have been simply A-55). In addition, a different route was originally planned around Sainte-Foy (now in the west end of Quebec City) south of Jean Lesage International Airport (the existing 12 km segment of Autoroute 40 between St-Augustin and Autoroute 73 would have been the western end of Autoroute 440, thus explaining the exit numbering starting at 12). While the right-of-ways of both bypasses still exist and may still be developed in the future as congestion increases, there are no immediate plans to renew construction.

Some discussion of eastward extensions of A-40 into the Charlevoix region and beyond have taken place, most likely to Route 360 in Beaupré or even as far as Route 362 in La Malbaie since tourism in the region is increasing; however, that appears unlikely in the short term.

The portion of Autoroute 40 from the Ontario border to Autoroute 25 is part of the Trans-Canada Highway.

In 1997, the highway (apart from the portion served by the Metropolitan Autoroute) was renamed Autoroute Félix-Leclerc after the late Quebec artist and political activist Félix Leclerc.

Its Metropolitan Autoroute portion in Montreal is the busiest highway in Quebec, as well as the second busiest in Canada after Highway 401 in Toronto.

Of historical note, a 25 km (16 mi) stretch of the highway in Pointe-Claire (from roughly St. John's Boulevard near Fairview Pointe-Claire Shopping Centre to St. Charles Boulevard) was used during the 1976 Summer Olympics for the men's road team time trial cycling race.[3]