Inuktitut
Not to be confused with Western Canadian Inuktitut.

Inuktitut (Inuktitut syllabics: ᐃᓄᒃᑎᑐᑦ (inuktitut fonts)) or Eastern Canadian Inuktitut, Eastern Canadian Inuit language is the name of some of the Inuit languages spoken in Canada. It is spoken in all areas north of the tree line, including parts of the provinces of Newfoundland and Labrador, Québec, to some extent in northeastern Manitoba as well as the territories of Nunavut, the Northwest Territories, and traditionally on the Arctic Ocean coast of Yukon.

It is recognised as an official language in Nunavut and the Northwest Territories. It also has legal recognition in Nunavik—a part of Québec—thanks in part to the James Bay and Northern Québec Agreement, and is recognised in the Charter of the French Language as the official language of instruction for Inuit school districts there. It also has some recognition in Nunatsiavut—the Inuit area in Labrador—following the ratification of its agreement with the government of Canada and the province of Newfoundland and Labrador. The Canadian census reports that there are roughly 35,000 Inuktitut speakers in Canada, including roughly 200 who live regularly outside of traditionally Inuit lands.[1] 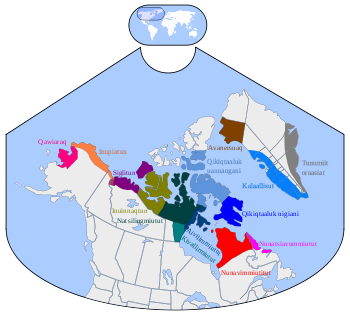 The demographic situation of Inuktitut is quite strong in Nunavut. Nunavut is the home of some 24,000 Inuit, most of whom – over 80% according to the 2001 census – speak Inuktitut, including some 3,500 people reported as monolinguals. 2001 census data shows that the use of Inuktitut, while lower among the young than the elderly, has stopped declining in Canada as a whole and may even be increasing in Nunavut.

The South Baffin dialect (Qikiqtaaluk nigiani) is spoken across the southern part of Baffin Island, including the territorial capital Iqaluit. This has in recent years made it a much more widely heard dialect, since a great deal of Inuktitut media originates in Iqaluit. Some linguists also distinguish an East Baffin dialect from either South Baffin or North Baffin, which is an Inuvialuk dialect.

As of the early 2000s, Nunavut has gradually implemented early childhood, elementary, and secondary school-level immersion programs within its education system to further preserve and promote the Inuktitut language.

Québec is home to roughly 12,000 Inuit, nearly all of whom live in Nunavik. According to the 2001 census, 90% of Québec Inuit speak Inuktitut.

The Nunavik dialect (Nunavimmiutitut) is relatively close to the South Baffin dialect, but not identical. Because of the political and physical boundary between Nunavik and Nunavut, Nunavik has separate government and educational institutions from those in the rest of the Inuktitut-speaking world, resulting in a growing standardisation of the local dialect as something separate from other forms of Inuktitut. In the Nunavik dialect, Inuktitut is called Inuttitut. This dialect is also sometimes called Tarramiutut or Taqramiutut.

The Nunatsiavut dialect (Nunatsiavummiutut, or often in government documents Labradorimiutut) was once spoken across northern Labrador. It has a distinct writing system, created by German missionaries from the Moravian Church in Greenland in the 1760s. This separate writing tradition, and the remoteness of Nunatsiavut from other Inuit communities, has made it into a distinct dialect with a separate literary tradition. The Nunatsiavummiut call their language Inuttut.

Although Nunatsiavut claims over 4,000 inhabitants of Inuit descent, only 550 reported Inuktitut to be their mother tongue in the 2001 census, mostly in the town of Nain. Inuktitut is seriously endangered in Labrador.

Nunatsiavut also had a separate dialect reputedly much closer to western Inuktitut dialects, spoken in the area around Rigolet. According to news reports, in 1999 it had only three very elderly speakers.[2]

Eastern Canadian dialects of Inuktitut have fifteen consonants and three vowels (which can be long or short). Consonants are arranged with five places of articulation: bilabial, alveolar, palatal, velar and uvular; and three manners of articulation: voiceless stops, voiced continuants and nasals, as well as two additional sounds — voiceless fricatives. Natsalingmiutut has an additional consonant /ɟ/, a vestige of the Retroflex consonants that were present in Proto-Inuit. Inuinnaqtun has one fewer consonant, as /s/ and /ɬ/ have merged into /h/. All dialects of Inuktitut have only three basic vowels and make a phonological distinction between short and long forms of all vowels. In Inuujingajut – Nunavut standard Roman orthography – long vowels are written as a double vowel.

Inuktitut, like other Eskimo–Aleut languages, has a very rich morphological system, in which a succession of different morphemes are added to root words to indicate things that, in languages like English, would require several words to express. (See also: Agglutinative language and Polysynthetic language). All words begin with a root morpheme to which other morphemes are suffixed. Inuktitut has hundreds of distinct suffixes, in some dialects as many as 700. Fortunately for the learners, the language has a highly regular morphology. Although the rules are sometimes very complicated, they do not have exceptions in the sense that English and other Indo-European languages do.

Inuktitut is written in several different ways, depending on the dialect and region, but also on historical and political factors.

Moravian missionaries, with the purpose of introducing the Inuit peoples to Christianity and the Bible, contributed to the development of an Inuktitut writing system in Greenland during the 1760s that was based on Roman orthography. They later travelled to Labrador in the 1800s, bringing the written Inuktitut with them. This roman alphabet writing scheme is distinguished by its inclusion of the letter kra.

The Alaskan Yupik and Inupiat (who, in addition, developed their own system of hieroglyphics) and the Siberian Yupik also adopted the system of Roman orthography.

Eastern Canadian Inuit were the last to adopt the written word when, in the 1860s, missionaries imported the written system Qaniujaaqpait they had developed in their efforts to convert the Cree to Christianity. The very last Inuit peoples introduced to missionaries and writing were the Netsilik Inuit in Kugaaruk and north Baffin Island. The Netsilik adopted Qaniujaaqpait by the 1920s.

The "Greenlandic" system has been substantially reformed in recent years, making Labrador writing unique to Nunatsiavummiutut at this time. Most Inuktitut in Nunavut and Nunavik is written using a scheme called Qaniujaaqpait or Inuktitut syllabics, based on Canadian Aboriginal syllabics. The western part of Nunavut and the Northwest Territories use a Roman orthography (alphabet scheme) usually identified as Inuinnaqtun or Qaliujaaqpait, reflecting the predispositions of the missionaries who reached this area in the late 19th century and early 20th.

In Siberia they use a Cyrillic script. 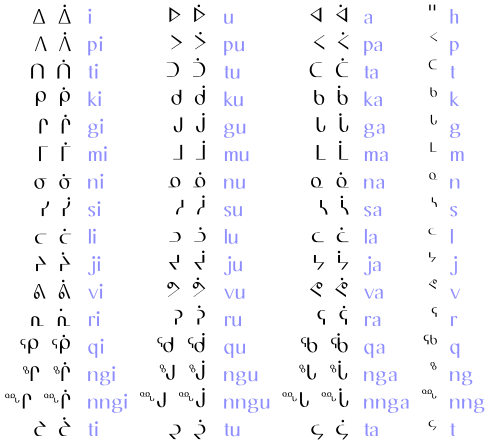 The syllabary used to write Inuktitut (titirausiq nutaaq). The extra characters with the dots represent long vowels; in the Latin transcription, the vowel would be doubled.

The Inuktitut syllabary used in Canada is based on the Cree syllabary devised by the missionary James Evans. The present form of the syllabary for Canadian Inuktitut was adopted by the Inuit Cultural Institute in Canada in the 1970s. The Inuit in Alaska, the Inuvialuit, Inuinnaqtun speakers, and Inuit in Greenland and Labrador use the Roman alphabet, although it has been adapted for their use in different ways.

Though conventionally called a syllabary, the writing system has been classified by some observers as an abugida, since syllables starting with the same consonant have related glyphs rather than unrelated ones.

All of the characters needed for the Inuktitut syllabary are available in the Unicode character repertoire. (See Unified Canadian Aboriginal syllabics (Unicode block).) The territorial government of Nunavut, Canada has developed a TrueType font called Pigiarniq for computer displays. It was designed by Vancouver-based Tiro Typeworks. Apple Macintosh computers include an Inuktitut IME (Input Method Editor) as part of keyboard language options.