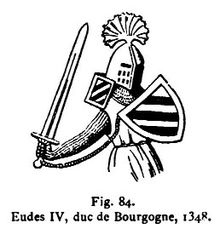 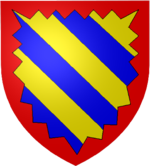 The arms of Eudes. He took the arms of his uncle and namesake, Eudes of Nevers, before the death of Hugh V. Note the indentation.

Odo was closely related to the French royal family, the Capetians. His father was heir to a cadet branch (the House of Burgundy) of the Capetian dynasty. His maternal grandparents were Saint Louis IX and Margaret of Provence. His elder sister, Margaret was married to Louis X of France and his younger sister, Joan, was married to Philip of Valois. He was thus an uncle of Queen Joan II of Navarre.

He succeeded his elder brother, Hugh V, in 1315. Odo defended the rights of his niece Joan of Navarre against Philip the Tall, another uncle, after Louis X's death in 1316. In 1318, Odo married Philip's eldest daughter, Joan III, Countess of Burgundy (1308 – 1347). He thus allied himself with Philip, who had become king of France in the meantime.

On the death of his brother, Louis in 1316, Odo was pressed by the Angevins to sell his rights as King of Thessalonica and Prince of Achaea to Philip I of Taranto. In 1320, he finally sold them to Louis, Count of Clermont.

Odo was a loyal vassal of his brother-in-law, Philip of Valois, after he succeeded to the French throne as Philip VI. He belonged to Philip VI’s small circle of trusted advisors. He fought in many theatres of French warfare: the Low Countries, Brittany, Aquitaine. He fought the Flemings and was wounded at the Battle of Cassel in 1328.

His wife inherited the domains of her mother in 1330: the county of Artois and the county of Burgundy, the so-called Free County. Her claim to the County of Artois was challenged by Robert III of Artois, who at that time was a favourite of King Philip VI. The dispute ended abruptly when in December 1330 the documents used by Robert of Artois to support his claim was found to be forged on his instruction. Robert of Artois fled France, eventually receiving asylum from Edward III of England in 1334. As the relationship between England and France started the slide which eventually resulted in the outbreak of the Hundred Years War in 1337, Philip VI went looking for a cause by which he could with some justification seize Edward III's French possession. When Philip VI chose the act of harbouring the fugitive Robert of Artois it was at least partly to gain the support of the Duke of Burgundy, his sister the Queen and their many protégés who feared what Robert of Artois might accomplish in an alliance with Edward III.

In 1340, Odo first fought in Hainaut where helped capture the town of Antoing and later defended Saint-Omer in the battle there against Robert III of Artois. During the summer the French government became aware of plans for an Anglo-Flemish army under Robert of Artois to attack on Saint-Omer. The Duke entered Saint-Omer 15 July with several thousands men-at-arms and begun preparing the defences of the city. The slow progress of the English army also allowed further reinforcements led by John I, Count of Armagnac to arrive. On 26 July Robert of Artois offered battle to the garrison of Saint-Omer. Contrary to orders some hotheads charged out. Their attack was beaten off, but their flight caused the Flemings to abandon their defensive works in pursuit. The Duke of Burgundy now decided to sally with the Count of Armagnac. During the battle the Duke got into a fierce fight with the English and Brugeois contingents and barely escaped back behind the walls. Meanwhile however the Count of Armaganc had scattered the enemy left flank. The loss of most of his Flemish troops forced Robert of Artois to flee back to Flanders.

He took part in the War of the Breton Succession as a partisan of Charles of Blois serving as advisor to John, Duke of Normandy during the latter’s campaign in Brittany autumn 1341.

He was present at the coronation of Pope Clement VI at Avignon 19 May 1342.

He served together with the Duke of Normandy and the Chancellor of France, Guillaume Flote, as French ambassadors to a peace conference at Avignon summer 1344. The conference was however actively sabotaged by the English. Henry, Earl of Derby who had been announced has the head of the English delegation, claimed once he arrived at Avignon to be there only in a private capacity for devotional reasons and the minor English officials who were officially there had no instructions.

In 1346, he was in Guyenne combatting the English. Spring that year the French government decided to field its so far strongest army in the south-west. The Duke of Burgundy followed John of Normandy south together with a substantial number of northern nobles and such dignitaries as Raoul II of Brienne, Count of Eu the Constable of France, both Marshals and the Master of Crossbowmen. In April Normandy laid siege to the town of Aiguillon which controlled the confluence between the Lot and the Garonne. There they still remained in August when John of Normandy was urgently recalled to the north to help stop Edward III who had landed in Normandy. The French 1346 campaign in the south ended having accomplished nothing.

In September Edward III laid siege to Calais. As Artois became the main theatre of the war, relations between the Duke and King Philip VI plummeted. The Duke governed Artois on behalf of his wife, but the royal government increasingly disregarded local officials and even began making its own appointments. In December 1346 Philip suspended the Duke’s government altogether.

Perhaps his greatest legacy is seen in the subsequent Burgundian court of the Valois dukes, for Odo was a patron of the arts and the church and sponsored many young artists. He also endeavoured for good political connexions and by marrying a French royal princess assured the good relations with the neighbouring kingdom. The premature death of his son Philip made his four year old grandson the heir apparent. He succeeded Eudes IV as Philip I after Eudes died of the plague at Sens.

By his wife Joan III, Odo had six sons, most of whom died young: