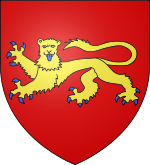 The coat of arms used for Guyenne is the same as for Aquitaine.

The name Guyenne comes from the Occitan Guiana, which is itself a corruption of the word Aquitaine. However the words Aquitaine and Guyenne came to indicate different entities. The region of Guyenne also became confused with the region of Gascony until this took on a distinct identity in the 17th Century. From this time "Guyenne and Gascony" was a common term corresponding roughly to modern northern Aquitaine.

The Duchy of Guyenne appears for the first time in the Treaty of Paris of 1229 which brought an end to the Albigensian Crusade, and may have been actually created by that treaty. The capital was Bordeaux. The Duchy was under the Kings of England, as Guyenne had been since 1154, and remained an English vassal until 1453. In 1453 it became land directly under the French Crown, except from 1469-72 when it was granted to Charles de Valois (until his death).

In 1561, Guyenne was made a province, and included Bordelais, Bazadais, Limousin, Périgord, Quercy, Rouergue, Agenais, Saintonge, and Angoumois. The province was abolished with all French provinces at the time of the French Revolution.