Duke of Burgundy
For the butterfly, see Hamearis lucina.

Duke of Burgundy (Fr.: duc de Bourgogne) was a title borne by the rulers of the Duchy of Burgundy, a small portion of traditional lands of Burgundians west of river Saône which in 843 was allotted to Charles the Bald's kingdom of West Franks. Todays th title is used by the House of Bourbon as a revived courtesy title. 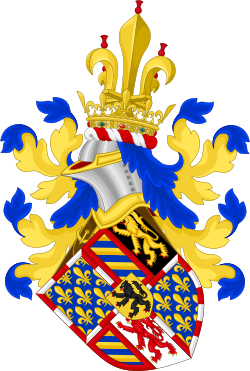 The first margrave (marchio), later duke (dux), of Burgundy was Richard of the House of Ardennes, whose duchy was created from the merging of several regional counties of the kingdom of Provence which had belonged to his brother Boso.

His descendants and their relatives by marriage ruled the duchy until its annexation over a century later by the French crown, their suzerain.

In 1004, Burgundy was annexed by the king, of the House of Capet. Otto William continued to rule what would come to be called the Free County of Burgundy. His descendants formed another House of Ivrea.

Robert, son of Robert II of France, received the Duchy as a peace settlement, having disputed the succession to the throne of France with his brother Henry.

John II of France, the second Valois king, successfully claimed the Duchy after the death of Philip, the last Capet duke. John then passed the duchy to his youngest son Philip as an apanage.

In 1477, the territory of the Duchy of Burgundy was annexed by France. In the same year, Mary married Maximilian, Archduke of Austria, giving the Habsburgs control of the remainder of the Burgundian Inheritance.

Although the territory of the Duchy of Burgundy itself remained in the hands of France, the Habsburgs remained in control of the title of Duke of Burgundy and the other parts of the Burgundian inheritance, notably the Low Countries and the Free County of Burgundy in the Holy Roman Empire. They often used the term Burgundy to refer to it (e.g. in the name of the Imperial Circle it was grouped into), until the late 18th century, when the Austrian Netherlands were lost to French Republic. The Habsburgs also continued to claim Burgundy proper until the Treaty of Cambrai in 1529, when they surrendered their claim in exchange for French recognition of Imperial sovereignty over Flanders and Artois.

The title was briefly claimed by king Philip V of Spain (Philip VIII) of the House of Bourbon between 1700–1713 when the succession of the Spanish throne was disputed between the Houses of Habsburg and Bourbon.

At the same time, various members of the French royal family, most notably Louis, Dauphin of France, the father of Louis XV of France, also used the title.