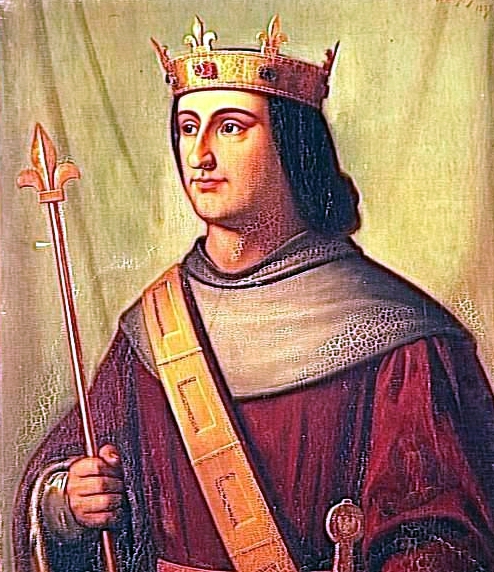 Philip VI (1293 &ndash; ), known as the Fortunate (French: "le Fortuné" [ [http://www.heraldique-europeenne.org/Celebres/Personnages/Philippe_VI_France.htm Heraldique-Europeenne] ] ) and of Valois, was the King of France from 1328 to his death. He was also Count of Anjou, Maine, and Valois from 1325 to 1328. A member of the , he was the son of (who was the brother of King Charles IV's father ) and the first King of France from the .

Ascension to the throne

In 1328, King Charles IV died without a direct male descendant; however, at the time of his death his wife was pregnant. Philip, as Charles' cousin, was one of the two chief claimants to the throne along with the demands of Dowager Queen Isabella of England, the late King Charles' sister, who claimed the French throne for her young son King . Philip rose to the regency with support of French magnates, following the pattern set up by Philip V's succession over his niece , and Charles IV's succession over all his nieces, including daughters of Philip V. A century later this pattern became the , which forbade females and those descended in the female line from succeeding to the throne. After Charles' queen, , gave birth to a girl, Philip was crowned as King on , [cite book |last= Curry |first= Anne |title= The Hundred Years' War |year= 2003 |publisher= Rutledge |location= New York |isbn= 0-415-96863-1 |pages= 18] at the Cathedral in Reims.Philip VI, though a descendant of , was not an heir nor a descendant of , whose inheritance (the kingdom of , as well as the counties of Champagne, , and ) had been in personal union with the crown of France almost fifty years and had long been administered by the same royal machinery (established by Philip IV, the father of French bureaucracy), which administrative resource was inherited by Philip VI. These counties were closely entrenched in the economic and administrative entity of the Royal Domain of France, being located adjacent to Ile-de-France. Philip, however, was not entitled to that inheritance; the rightful heiress was Louis X's surviving daughter, the future , the genealogically senior granddaughter of Joan I of Navarre. Philip ceded Navarre to Joan II, but regarding the counties in Champagne, they struck a deal: Joan II received vast lands in (adjacent to her husband's fief in Evreux) in compensation, and Philip got to keep Champagne as part of the Royal Domain.

Philip's reign was punctuated with crises. It began with military success in at the Battle of Cassel (August 1328), where Philip's forces reseated , who had been unseated by a popular revolution. The able Jeanne gave the first of many demonstrations of her competence as regent in his absence.

Philip initially enjoyed relatively amicable relations with Edward III, and they planned a crusade together in 1332, which was never executed. However, the status of the remained a sore point, and tension increased. Philip provided refuge for in 1334 and declared himself champion of his interests, which enraged Edward. By 1336, they were enemies, although not yet openly at war.

Philip successfully prevented an arrangement between the papacy in and Emperor Louis IV although, in July 1337, Louis concluded an alliance with Edward III.

The final breach with England came when Edward offered refuge to , formerly one of Philip's trusted advisers. However, after he committed to try to obtain an inheritance, he barely escaped France with his life, and was hounded by Philip throughout Europe. Edward made him and honored him; in retaliation, Philip declared on , that Edward had forfeited Aquitaine for rebellion and disobedience. Thus began the .

Philip entered the Hundred Years' War in a position of comparative strength. France was richer and more populous than England, and was then in the height of her medieval glory. The opening stages of the war, accordingly, were largely successful for the French.

At sea, French privateers raided and burned towns and shipping all along the southern and southeastern coasts of England. The English made some retaliatory raids, including the burning of a fleet in the harbor of , but the French largely had the upper hand. With his sea power established, Philip gave orders in 1339 to prepare an invasion of England, and began assembling a fleet off the coast at . However, in June 1340, in the bitterly-fought ("l'Ecluse"), the English attacked the port and captured or destroyed the ships there, ending the threat of an invasion.

On land, Edward III largely concentrated upon and the , where he had gained allies by diplomacy and bribery. A raid in 1339 (the first ) into ended ignominiously when Philip wisely refused to give battle. Edward's slender finances would not permit him to play a waiting game, and he was forced to withdraw into Flanders and return to England to raise more money. In July 1340, Edward returned and besieged ; again, Philip brought up a relieving army which harassed the besiegers but did not offer open battle, and Edward was again forced to return home, fleeing the Low Countries secretly to escape his creditors.

So far, the war had gone quite well for Philip and the French. While often stereotyped as chivalry-besotten blockheads, Philip and his men had in fact carried out a successful against the debt-plagued Edward, and resisted the chivalric blandishments of single combat or a combat of two hundred knights that he offered. In 1341, the allowed the English to place permanent garrisons in . However, Philip was still in a commanding position: during Papally-arbitrated negotiations in 1343, he refused Edward's offer to end the war in exchange for the in full sovereignty.

The next attack came in 1345, when the Earl of Derby overran the (lost twenty years before in the ) and took , while the forces in Brittany under Sir also made gains. The French responded in the spring of 1346 with a massive counter-attack against Aquitaine, where an army under John, Duke of Normandy besieged Derby at . On the advice of (like Robert III of Artois, a banished French nobleman), Edward sailed for instead of Aquitaine. As Harcourt predicted, the Normans were ill-prepared for war, and many of the fighting men were at Aiguillon. Edward sacked and burned the country as he went, taking and advancing as far as before retreating before the army Philip hastily assembled at . Slipping across the , Edward drew up to give battle at .

Close behind him, Philip had planned to halt for the night and reconnoiter the English position before giving battle the next day. However, his troops were disorderly and not to be handled: the roads were jammed by the rear of the army coming up, and by the local peasantry furiously calling for vengeance on the English. Finding them hopeless to control, he ordered a general attack as evening fell. Thus began the ; and when it was done, the French army had been well-nigh annihilated, and Philip barely escaped capture. Fortune had turned against the French.

The English seized and held the advantage. Normandy called off the siege of Aiguillon and retreated northward, while Sir Thomas Dagworth captured in Brittany. The English army pulled back from Crécy to besiege ; the town held out stubbornly, but the English were determined, and easily supplied across the . Philip led out a relieving army in July 1347, but unlike the siege of Tournai, it was now Edward who had the upper hand. With the plunder of his Norman expedition and the reforms of his tax system he had executed, he could hold to his siege lines and await an attack Philip dare not deliver. It was Philip who marched away in August, and the city capitulated shortly thereafter.

After the defeat at Crécy and loss of Calais, the Estates refused to raise money for Philip, halting his plans to counter-attack by invading England. In 1348, a new woe struck France: the , which in the next few years killed one-third of the population, including Queen Joan. The resulting labor shortage caused inflation to soar, and the king attempted to fix prices, further de-stabilizing the country. His last major achievement was the purchase of the and the territory of in the , in 1349. At his death in 1350, France was still very much a divided country filled with social unrest.

In July, 1313, Philip married ( _fr. Jeanne), daughter of , and princess Agnes of France, the youngest daughter of Louis IX. In an ironic twist to his "male" ascendancy to the throne, the intelligent, strong-willed Joan, an able regent of France during the King's long military campaigns, was said to be the brains behind the throne and the real ruler of France.

Philip VI died at , on , and is interred with his second wife, Blanche de Navarre (1330&ndash;1398) in . He was succeeded by his first son by Jeanne of Burgundy, who became John II.