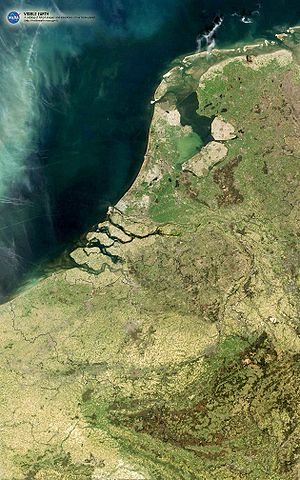 The Low Countries as seen from space

The Low Countries (Dutch: De Lage Landen) are the historical lands around the low-lying delta of the Rhine, Scheldt, and Meuse rivers, including the modern countries of Belgium, the Netherlands, Luxembourg and parts of northern France and western Germany. The term is more appropriate to the era of the Late Middle Ages and Early Modern Europe when strong centrally governed nations were slowly forming and territorial governance was in the hands of a noble or of a noble house.

Historically after the Roman denomination of it as Gallia Belgica the region politically had its origins in Middle Francia, more precisely its northern part which became the Duchy of Lower Lotharingia. After the disintegration of Lower Lotharingia the Low Countries were brought under the rule of various stronger neighbours. Their possessions can be renamed into the Burgundian Netherlands and their succeeding Habsburg Netherlands, also called the United Seventeen Provinces (up to 1581), and later for the Southern parts as the Spanish Netherlands and Austrian Netherlands, whereas the northern parts formed the autonomous Dutch Republic. At times they reached a form of unity as the United Seventeen Provinces in the 16th Century, and later the United Kingdom of the Netherlands in the 19th Century. The French name for the Netherlands, les Pays-Bas (literally translated "the Low Countries") is based on this historical context.

The term is not particularly current in modern contexts because the region does not exactly correspond to the sovereign states of the Netherlands, Belgium and Luxembourg, for which an alternative term, Benelux, was employed after the Second World War, though only to describe them as a trading union.

Before early modern nation building, the Low Countries referred to a wide area of northern Europe as a low-lying triangular river delta for the rivers Rhine, Meuse, Scheldt, and Ems. This area roughly stretches from French Gravelines and Dunkirk at its southwestern point, to the area of Dutch Delfzijl and German Eastern Frisia at its northeastern point, and to Luxembourg and French Thionville in the southeast.

The Low Countries were the scene of the early northern towns, newbuilt rather than developed from ancient centres, that mark the reawakening of Europe in the 12th century. In that period, they became one of the most densely populated regions of Europe, together with northern Italy.

A collection of several regions rather than one homogeneous region, all the low countries still shared a great number of similarities.

The low countries were part of the Roman provinces of Belgica, Germania Inferior and Germania Superior. They were inhabited by Belgic tribes, before these were replaced by Germanic tribes in the 4th and 5th century. They were governed by the ruling Merovingian dynasty.

By the end of the 8th century, the Low Countries formed a part of Francia and the Merovingians were replaced by the Carolingian dynasty. In 800 the Pope crowned and appointed Charlemagne Emperor of the re-established Roman Empire.

Thus, the Low Countries consisted of fiefs whose sovereignty resided with either the Kingdom of France or the Holy Roman Empire. The further history of the Low Countries can be seen as a continual struggle between these two powers.

Gradually, separate fiefs came to be ruled by a single family through royal intermarriage. This process culminated in the rule of the House of Valois, who were the rulers of the Duchy of Burgundy

In 1477 the Burgundian holdings in the area, the Burgundian Netherlands passed through an heiress -- Mary of Burgundy -- to the Habsburgs. In the following century the "Low Countries" corresponded roughly to the Seventeen Provinces covered by the Pragmatic Sanction of 1549 of Holy Roman Emperor Charles V, which freed the provinces from their archaic feudal obligations.

After the northern Seven United Provinces of the seventeen declared their independence from Habsburg Spain, the provinces of the Southern Netherlands were recaptured (1581) and are sometimes called the Spanish Netherlands.

In 1713, under the Treaty of Utrecht following the War of the Spanish Succession, what was left of the Spanish Netherlands was ceded to Austria and thus became known as the Austrian Netherlands. The United Kingdom of the Netherlands (1815-1830) temporarily united the Low Countries again.

In English, the plural form Netherlands is used for the present-day country, but in Dutch that plural has been dropped; one can thus distinguish between the older, larger Netherlands and the current country. So Nederland (singular) is used for the modern nation and de Nederlanden (plural) for the domains of Charles V. However, in official use the name of the Dutch kingdom is still Kingdom of the Netherlands (Koninkrijk der Nederlanden); the plural has not been dropped. The name Kingdom of the Netherlands also refers to the united kingdom of 1815 - 1830/39, which included present-day Belgium.