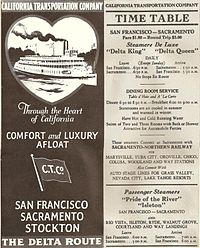 The Delta Queen is an American sternwheel steamboat that is a U.S. National Historic Landmark. Historically, she has been used for cruising the major rivers that constitute the drainage of the Mississippi River, particularly in the American South. As of June 2009, she is docked in Chattanooga, Tennessee and has been converted into a hotel. It is possible that she will come back on the rivers.[3]

The hull, first two decks and steam engines were ordered in 1924 from the William Denny & Brothers shipyard on the River Leven adjoining the River Clyde at Dumbarton, Scotland. The Delta Queen and her sister boat, the Delta King, were shipped in pieces to Stockton, California in 1926. There the California Transportation Company assembled the two vessels for their regular Sacramento River service between San Francisco and Sacramento, and excursions to Stockton, on the San Joaquin River. At the time, they were the most lavishly appointed and expensive sternwheel passenger boats ever commissioned. Driven out of service by a new highway linking Sacramento with San Francisco in 1940, the two vessels were laid up and then purchased by Isbrandtsen Steamship Lines for service out of New Orleans. During World War II, they were requisitioned by the U.S. Navy for duty in San Francisco Bay as USS Delta Queen (YFB-56).

In 1946, Delta Queen was purchased by Greene Line of Cincinnati, Ohio and towed via the Panama Canal and the Mississippi and Ohio Rivers to be refurbished in Pittsburgh.[5] On that ocean trip she was piloted by Frederick Way Jr.. In 1948 she entered regular passenger service, plying the waters of the Ohio, Mississippi, Tennessee, and Cumberland Rivers between Cincinnati, New Orleans, St.Paul, Chattanooga, Nashville, and ports in between. Ownership of the vessel has changed a number of times over the last fifty years, and since 1971, Delta Queen has operated with a presidential exemption to the law prohibiting the operation of overnight passenger vessels with wooden superstructures. Her Betty Blake Lounge is named in honor of the lady who rose from secretary to president of the steamship line and who lobbied for the exemption.

The Delta Queen was listed on the National Register of Historic Places in 1970 and further was declared a National Historic Landmark in 1989.[2][6] 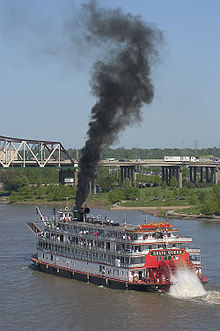 The vessel was most recently operated by Majestic America Line.[7] The vessels were purchased from the Delaware North Companies in April 2006. Besides the Delta Queen, the company also owns the American Queen and Mississippi Queen, modern steamboats designed along the lines of the Delta Queen, but carrying around 400 passengers. The company also owns riverboats that have seen service on the Columbia and Snake Rivers in Oregon and Washington, and the Alaska Inside Passage.

The Delta Queen cruised the Mississippi River and its tributaries on a regular schedule, with cruises ranging from New Orleans to Memphis to St. Louis to St. Paul to Cincinnati to Pittsburgh, and many more. In some cruises, the vessel probed rivers such as the Arkansas, Red, Tennessee-Tombigbee Waterway, Black Warrior, Mobile, and more. 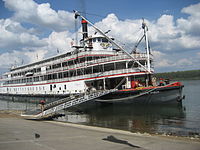 The Delta Queen preparing to disembark from Paducah, Kentucky on October 6, 2007.

The Queen recreated historic steamboat races each year during the Kentucky Derby Festival, when it raced with the Belle of Louisville on the Ohio at Louisville in the Great Steamboat Race. The winner of the annual race would received a trophy of golden antlers, which was mounted on the pilot house until the next race. They also raced during the Tall Stacks festivals celebrating steamboats, held every three or four years in Cincinnati (the Delta Queen's former home port).

On August 1, 2007, Majestic America Line announced that the Delta Queen would cease operations permanently at the end of the 2008 season. The temporary exemption from SOLAS needed to keep the Queen running was reportedly thrown out in a recent Congressional decision.

In response to this announcement, in September 2007 the MSP for Dumbarton, Jackie Baillie, backed by 15 other Members, submitted a motion to the Scottish Parliament calling for the preservation of the ship.[8]

In the United States, devotees of the boat created a renewed "Save the Delta Queen" campaign similar to the one undertaken in the 1970s.

However, at the end of the 2008 season, the Delta Queen ceased all service. On its official website,[7] the Majestic America Line announced it is ending all operations, will not operate in 2009, and that its assets, including all its riverboats, are for sale.

On February 11, 2009, the Delta Queen arrived in Chattanooga, Tennessee to become a floating boutique hotel, as it was feared the vessel could be vandalized if it remained in New Orleans.[4] Under lease to Chattanooga businessman Harry Phillips, she's now docked at Coolidge Park Landing on Chattanooga's North Shore. The Delta Queen Hotel officially opened for overnight guests on June 5, 2009, offering dining, a lounge, live period music and theatrical performances.

The ship is currently owned by Ambassadors International,[9] and is leased and operated by a company called All Aboard Travel, operating as Delta Queen LLC, which began leasing the vessel in August 2010.[10][11] Ambassadors International listed the ship for sale beginning in late 2008 at a price of $4.75 million,[11] and in November 2010 it was announced that a group called Save the Delta Queen 2010 was planning to place a bid to purchase the ship.[9] If it succeeded, the group would place the ship into operation, carrying only 49 people in order to be exempt from federal fire safety regulations, which apply to ships carrying upwards of 50 people.[9]

For a time, with the steamer American Queen turned over to MARAD and the Mississippi Queen sold for scrap below New Orleans, the Delta Queen was the only steamboat to have been owned by the Delta Queen Steamboat Company (formerly Greene Line Steamers) to remain in service, albeit without running trips. However, as of November 2011, the Great American Steamboat Company of Memphis, Tennessee was booking cruises on the American Queen along the Upper and Lower Mississippi river.