The Arkansas River is a major tributary of the Mississippi River. The Arkansas generally flows to the east and southeast as it traverses the U.S. states of Colorado, Kansas, Oklahoma, and Arkansas. The river's initial basin starts in the Western United States in Colorado, specifically the Arkansas River Valley where the headwaters derive from the snowpack in the Collegiate Peaks. Then it flows east into the Midwest via Kansas, and finally into the South through Oklahoma and Arkansas.

At 1,469 miles (2,364 km), it is the sixth longest river in the United States,[5] the second-longest tributary in the Mississippi-Missouri system, and the 45th longest river in the world. Its origin is in the Rocky Mountains in Lake County, Colorado, near Leadville. In 1859 placer gold was discovered in the Leadville area bringing thousands seeking to strike it rich, however the easily recovered placer gold was quickly exhausted.[6] The Arkansas River's mouth is at Napoleon, Arkansas, and its drainage basin covers nearly 170,000 sq mi (440,300 km²).[3] In terms of volume, the river is much smaller than both the Missouri and Ohio Rivers, with a mean discharge of roughly 41,000 cubic feet per second (1,200 m3/s).

The Arkansas from its headwaters to the 100th meridian west formed part of the US-Mexico border from the Adams-Onís Treaty (in force 1821) until the Texas Annexation or Treaty of Guadelupe Hidalgo.

Name pronunciation varies by region. Many people in midwestern states, including Kansas and Colorado, pronounce it /ɑrˈkænzəz/ ar-kan-zəz, while people in the state of Arkansas typically pronounce it /ˈɑrkənsɔː/ ar-kən-saw according to a state law passed in 1881.[7] 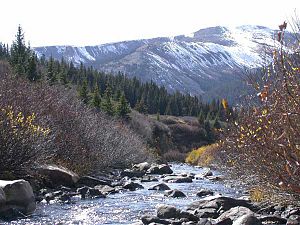 The headwaters of the Arkansas near Leadville, Colorado

The Arkansas has three distinct sections in its long path through central North America.

At its headwaters, the Arkansas runs as a steep mountain torrent through the Rockies in its narrow valley, dropping 4,600 feet (1.4 km) in 120 miles (193 km). This section (including The Numbers near Granite, Colorado, Brown's Canyon, and the Royal Gorge) sees extensive whitewater rafting in the spring and summer.

At Cañon City, Colorado, the Arkansas River valley widens and flattens markedly. Just west of Pueblo, Colorado, the river enters the Great Plains. Through the rest of Colorado, through Kansas, and through most of Oklahoma it is a typical Great Plains riverway, with wide shallow banks subject to seasonal flooding. Tributaries include the Canadian River and the Cimarron River (both flowing from northeastern New Mexico) and the Salt Fork Arkansas River.

The river is navigable by barges and large river craft to Catoosa, Oklahoma because of a series of locks and dams referred to below (McClellan-Kerr Arkansas River Navigation System). Above Catoosa, the Arkansas River waterway itself is navigable only by small craft such as rafts or canoes.

Through western Arkansas, the river valley is home to high, isolated, flat-topped mesas, buttes, or monadnocks such as Mount Nebo and Petit Jean Mountain, and Mount Magazine, the highest point in the state. The river valley widens and shallows just west of Little Rock, Arkansas and continues eastward across the plains and forests of eastern Arkansas until it connects with the Mississippi River.

The I-40 Bridge Disaster of May 2002 took place on I-40's crossing of Kerr Reservoir on the Arkansas River near Webbers Falls, Oklahoma.

Since 1902, Kansas has claimed that Colorado takes too much of the river's water, resulting in a number of lawsuits before the U.S. Supreme Court that continue to this day,[8] generally under the name of Kansas v. Colorado. The problems over the possession and use of Arkansas River water by Colorado and Kansas led to the creation of an interstate compact or agreement between the two states.[8] While Congress approved the Arkansas River Compact in 1949,[8] it did not stop further disputes by the two states over water rights to the river.

The McClellan-Kerr Arkansas River Navigation System begins at the Tulsa Port of Catoosa on the Verdigris River, and runs via an extensive Lock and Dam system to the Mississippi River.

Through Oklahoma and Arkansas, dams artificially deepen and widen this modestly sized river to build it into a commercially navigable body of water. From the mouth of the Verdigris, until the McClellan-Kerr system moves over to the White River near Arkansas Post, the Arkansas sustains commercial barge traffic and offers passenger and recreational use and is little more than a series of reservoirs.

Many nations of Native Americans lived near, or along, the 1,450 mile (2334 km) stretch of the Arkansas River for thousands of years.[citation needed] The first Europeans to see the river were members of the Spanish Coronado expedition on June 29, 1541. Also in the 1540s, Hernando de Soto discovered the junction of the Arkansas with the Mississippi. The name "Arkansas" was first applied by Father Jacques Marquette, who called the river Akansa in his journal of 1673.

Later, the Santa Fe Trail followed the Arkansas through much of Kansas, except for the Cimarron Cutoff from Cimarron, Kansas, to Cimarron, New Mexico, via Cimarron County, Oklahoma along the Cimarron River.

In the 1880s, Charles "Buffalo" Jones, one of the co-founders of Garden City, Kansas, organized four irrigation companies to take water one hundred miles from the Arkansas River to cultivate 75,000 acres (300 km2) of land.[9]

The headwaters of the Arkansas River, in central Colorado, has been known for exceptional trout fishing, particularly fly fishing, since the 19th century when Cutthroat trout dominated the river.[10] Today, Brown trout dominate the river, which also contains Rainbow trout. Trout Unlimited considers the Arkansas one of the top 100 trout streams in America,[11] a reputation the river has had since the 1950s.[12] From Leadville to Pueblo, the Arkansas river is serviced by numerous fly shops and guides operating in Buena Vista, Salida, Cañon City and Pueblo. The Colorado Division of Wildlife provides regular online fishing reports for the river.[13][14]

A fish kill occurred on December 29, 2010 in which an estimated 100,000 freshwater drum lined the Arkansas River bank.[15][16] An investigation was conducted by the Arkansas Game and Fish Commission, found that the dead fish "cover 17 miles of river from the Ozark Lock and Dam downstream to River Mile 240, directly south of Hartman, Arkansas."[16] The commission has sampled some of the dead fish and has stated that it could take up to 30 days for full test results.[16] Although the cause of death has yet to be determined, state officials have suggested that a disease is the cause.[17] Residents are advised not to eat the fish as the cause of death remains undetermined.[18]

The Arkansas River passing through Little Rock, Arkansas, as viewed from the north bank.