Jawi alphabet
Not to be confused with Javanese script

Jawi (Jawi: جاوي Jāwī; Yawi in Pattani) is an Arabic alphabet for writing the Malay language.

Jawi is one of the two official scripts in Brunei, and is used as an alternate script in Malaysia. Usage wise, it was the standard script for the Malay language but has since been replaced by a Roman alphabet called Rumi, and Jawi has since been relegated to a script used for religious and cultural purposes. Day-to-day usage of Jawi is maintained in more conservative Malay-populated areas such as Sulu in the Philippines, Pattani in Thailand, Kelantan in Malaysia.[1] and parts of Malay dominated areas in Indonesia. 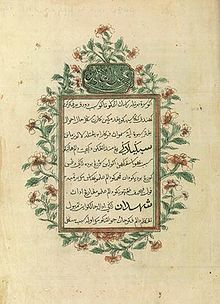 Pages from Stories of Abdullah in the Jawi script.

The Jawi alphabet has existed since around 1300 CE in the Malay Archipelago. Its development is linked with the arrival of Islam, mainly from Persians. It was adapted to suit spoken classical Malay – it is written from right to left and has 6 sounds not found in Arabic: ca pa ga nga va and nya. Many Arabic characters are never used as they are not pronounced in Malay language, and some letters are never joined and some joined obligatorily so.[2][3]

The Jawi script originated from Arabic literature introduced from Persian contact with the Kingdom of Jambi, also called the Kingdom of Malayu, north of Palembang, Sumatera, Indonesia, where classical Malay- the root language from which modern Indonesian and Malay are both derived.[4][5][6] It is probable that those who converted to Islam opted to write in the Jawi script, due to its close association with Islamic culture, rather than to use the Javanese script, which was derived from the writing systems used in the Hindu and Buddhist regions of South Asia. The etymology of Jawi imply originated in Java, as some scholars argue.[7] However, as it is present, but not common in Java, it could be the case that the word Jawi was used as a catch-all term to describe those under Javanese rule or from the vague direction of Java.[8] It could also be referring to the ancient empire of Javaka, hence the term Jawi, the predecessor to the empires of Majapahit and Srivijaya [9] with whom the Arabs traders and missionaries made early contact.

The earliest archeological remains have been found on the Terengganu Inscription Stone (Batu Bersurat Terengganu), dated 1303 A.D. (702H by the Islamic calendar), whereas the earliest use of the Roman alphabet is found near the end of the 19th century. The earliest document so far discovered is the circa 1300–1399 CE romantic poem Syair Bidasari discovered in Sumatra.[10] The region of Terengganu was known to be under the influence of Srivijaya as late as the 13th century, while the Terengganu Sultanate only dates as far back as the 18th century. This adds extra weight to the argument of Jawi originating in Jambi[11] by the former Sriwijaya vassal kingdoms of Pasai.[8][11]

The spread and extent of Jawi script

The script became prominent with the spread of Islam, as the Malays found that the earlier Pallava script was totally unsuited as a vehicle to relay religious concepts. The Malays held the script in high esteem as it is the gateway to understanding Islam and its Holy Book, the Quran. The use of jawi script was a key factor driving the emergence of Malay as the lingua franca of the region, alongside the spread of Islam.[12] It was widely used in the Sultanate of Malacca, Sultanate of Johor, Sultanate of Brunei, Sultanate of Sulu, Sultanate of Patani, the independent Sultanate of Aceh Darussalem to the Sultanate of Ternate in the east as early as the 15th century. The jawi script was used in royal correspondences, decrees, poems and was widely understood by the merchants in the port of Malacca as the main means of communication. Early legal digests such as the Malacca Code and its derivatives including the Codes of Johor, Kedah and Brunei were written in this script. It is the medium of expression of kings, nobility and the religious scholars. It is the traditional symbol of Malay culture and civilization. Jawi was used not only amongst the ruling class, but also the common people. The Islamisation of the region popularised jawi into a dominant script.[13]

Royal correspondences for example are written, embellished and ceremoniously delivered. Examples of royal correspondences still in the good condition is the letter between Sultan Abu Hayat of Ternate and King John III of Portugal (1521) ; the letter from Sultan Iskandar Muda of Aceh to King James I of England (1615); the letter from Sultan Abdul Jalil IV of Johor to King Louis XV of France (1719).[13] Many literary works such as epics, poetry and prose use the Jawi script. It is the pinnacle of the classic Malay civilization. Historical epics such as the Malay Annals, as listed by UNESCO under Memories of the World, are among the countless epics written by the Malay people. The Sufic poems by Hamzah Fansuri and many others contributed to the richness and depth of the Malay civilization.

To the Malays, there has never been any difference between using jawi or rumi. Both are scripts that have been appropriated to represent the Malay language in writing. During the colonial period, jawi still predominated throughout the Malay Archipelago, particularly in the literary and artistic domains, Islamic theology, philosophy and mysticism, commerce and trade, as well as in feudal governance and laws. Over time, with the preponderance of rumi, jawi has become primarily reserved for Malay religious discourse.[14] Jawi script was the official script for Unfederated Malay States during British protectorate.

Indonesia, looking back to its Javanese Majapahit[15] roots, is less than enthusiastic with regards to the script. It is today seen as backward or kampungan lacking the grace, beauty and illustrious nature of Javanese script.[16] Pegon script is used instead for religious purpose & teaching in Java.

Today, the script is used for religious and Malay cultural administration in Terengganu, Kelantan, Kedah, Perlis and Johor, as well as in Sulu and Marawi in the Philippines. Various efforts were in place to revive the Jawi script in Malaysia and Brunei due to its important role in the Malay and Islamic spheres. The Malays in Patani still use Jawi today for the same reasons.[12]

It is worth noting a quotation by Pendeta Za’ba in the foreword of the book Panduan Membaca dan Menulis Jawi (1957):

“We should not discard or abandon the jawi script even though Malays are generally using the romanised script. This is because the jawi script belongs to us and is part of our heritage.”[17]

Writing Jawi on a computer

To write Jawi, a user basically needs to have four components:

In Windows Vista, 7, or XP, this rendering engine is %WINDIR%\system32\usp10.dll. In XP, the usp10.dll is version 1.4 and doesn't support certain Jawi characters such as gaf. In Vista, the usp10.dll is version 1.61 and support all jawi characters. The latest technology is DirectWrite from Microsoft. It is a text layout and glyph-rendering API. It was designed to replace GDI/GDI+ and Uniscribe for screen-oriented rendering and was shipped with Windows 7 and Windows Server 2008 R2, as well as Windows Vista and Windows Server 2008.

In Mac OS X and Linux, the rendering process is different.

The encoding for gaf is U+0762 (ݢ), not U+06AC (ڬ). The latter has a different final form, but is better supported in fonts and therefore often used as a substitute in local publications.

There are only few fonts that support the six extra characters in Jawi. Some of these are "Times New Roman", "Arabic Typesetting", "Scheherazade"[19] and "Lateef Regular".[20]

Most recent programs, as of 2009, support Unicode, including right-to-left writing. This includes all major office suites such as MS-OFFICE and OpenOffice.

Online transliteration (Latin to Jawi) is available at

In Jawi, there is a character called "3/4 ء"(three-quarter ء). This hamzah is used in many Jawi words, however, there is currently no Unicode codepoint for 3/4 ء. Many users simply use the regular Arabic ء, and then shift the ء upwards.