An authentic oriental rug is a handmade carpet that is either knotted with pile or woven without pile.

By definition - Oriental rugs are rugs that come from the orient. The simple definition of the term would be - rugs that come from (were made in) an Asian Country such as: China and Vietnam in the east to Turkey, Maghreb countries, Cyprus and Iran in the west and the Caucasus in the north to India in the south. People from different cultures, countries, racial groups and religious faiths are involved in the production of oriental rugs. Oriental rugs are organized by origin: Persian rugs, Arab rugs, Anatolian rugs, Kurdish rugs, Caucasian rugs, Central Asian rugs, Turkestanian (Turkmen, Turkoman) rugs, Chinese rugs, Tibetan rugs and Indian rugs. 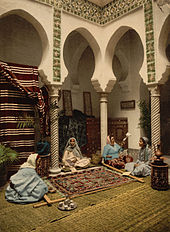 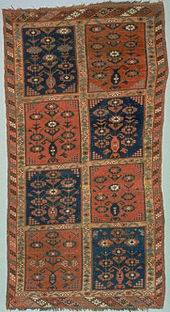 A Central Asian rug, 19th century. The symmetrical motif of flowers in a vase on a stand is familiar from Chinese decorative arts. Chinese designs often influenced designs in carpets from eastern Central Asia. Here, the flowers and background show color alternation within a rectangular grid.
Categories: