Micronesia
This article is about the greater region. For the independent state, see Federated States of Micronesia. 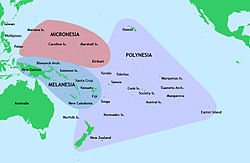 Micronesia is one of three major cultural areas in the Pacific Ocean. 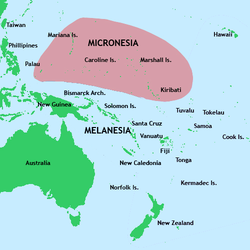 Micronesia is a subregion of Oceania, comprising thousands of small islands in the western Pacific Ocean. It is distinct from Melanesia to the south, and Polynesia to the east. The Philippines lie to the west, and Indonesia to the southwest.

The name Micronesia derives from the Greek mikros (μικρός), meaning small, and nesos (νῆσος), meaning island. The term was first proposed to distinguish the region in 1831 by Jules Dumont d'Urville.

The following islands and groups of islands are considered part of Micronesia:

The only empire known to have originated in Micronesia was based in Yap.

Much of the area came under European domination quite early. In the early 17th Century Spain colonized Guam, the Northern Marianas, and the Caroline Islands (what would later become the Federated States of Micronesia and Palau), creating the Spanish East Indies, which was governed from the Spanish Philippines until the Spanish-American War in 1898.

Full European colonization did not come, however, until the early 20th century, when the area would be divided between:

During the World War I, Germany's Pacific island territories were seized and they became League of Nations Mandates in 1923. Nauru became an Australian mandate, while Germany's other territories in Micronesia were given as a mandate to Japan and were named the South Pacific Mandate. Following Japan's defeat in the Second World War, its mandate became a United Nations Trusteeship, the Trust Territory of the Pacific Islands, ruled by the United States.

Today, most of Micronesia are independent states, except for Guam and Wake Island, which are U.S. territories, and for the Northern Mariana Islands, which are a U.S. commonwealth.

The people today form many ethnicities, but are all descended from and belong to the Micronesian culture. The Micronesian culture was one of the last native cultures of the region to develop. It developed from a mixture of Melanesians, Polynesians, and Filipinos. Because of this mixture of descent, many of the ethnicities of Micronesia feel closer to some groups in Melanesia, Polynesia or the Philippines. A good example of this are the Yapese who are related to Austronesian tribes in the Northern Philippines.[1]

These are apparently no more closely related to Micronesian languages than they are to languages of the Philippines, Malaysia, and Indonesia (Kirch, 2000: pp. 166–167).

On the eastern edge of the Federated States of Micronesia, the languages Nukuoro and Kapingamarangi represent an extreme westward extension of Polynesian.

The region is home to the Micronesian Games, a quadrennial international multi-sport event involving all Micronesia's countries and territories except Wake Island.

In September 2007, journalists in the region founded the Micronesian Media Association.[2]