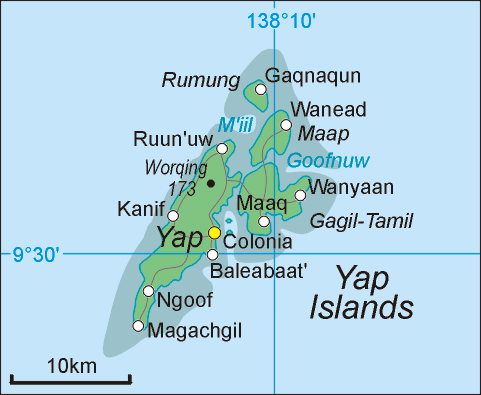 Yap, also known as Wa'ab for locals [ [http://www.visityap.com/history.html Welcome to VisitYap.com ] ] , is an in the of the western . It is a state of the . Yap's indigenous cultures and traditions are still strong compared to other neighboring islands.

Yap is notable for its stone money, known as Rai (see photograph): large -shaped, carved disks of (usually) calcite, up to 4 m (12 ft) in diameter (most are much smaller). The smallest known one is only convert|7|cm in diameter. There are five major types of monies: "Mmbul", "Gaw", "Fe' or Rai", "Yar", and "Reng", this last being only 0.3 m (1 ft) in diameter. Many of them were brought from other islands, as far as , but most came in ancient times from . Their value is based on both the stone's size and its history. Historically the Yapese valued the disks because the material looks like quartz, and these were the shiniest objects around. Eventually the stones became legal tender and were even mandatory in some payments [Goldberg, Dror. "Famous Myths of "Fiat Money"," Journal of Money, Credit and Banking 2005, 957-967] . The stones' value was kept high due to the difficulty and hazards involved in obtaining them. To quarry the stones, Yapese adventurers had to sail to distant islands and deal with local inhabitants that were sometimes hostile. Once quarried, the disks had to be transported back to Yap via rafts towed behind wind-powered canoes. The scarcity of the disks, and the effort and peril required to obtain them, made them valuable to the Yapese. However, in 1874, an enterprising Irishman named David O'Keefe hit upon the idea of employing the Yapese to import more "money" in the form of shiploads of large stones, also from Palau. O'Keefe then traded these stones with the Yapese for other commodities such as s and . Although some of the O'Keefe stones are larger than the canoe-transported stones, they are less valuable than the earlier stones due to the comparative ease in which they were obtained. Approximately 6,800 of them are scattered around the island. As no more disks are being produced or imported, this is fixed ("Washington Post", 1984). The islanders know who owns which piece, but do not necessarily move them when ownership changes. Their size and weight (the largest ones require twenty adult men to carry) make them very difficult to move around. Although today the is the currency used for everyday transactions in Yap, the stone disks are still used for more traditional or ceremonial exchange. The stone disks may change ownership during marriages, transfers of land title, or as compensation for damages suffered by an aggrieved party.

Yap Proper (known as Wa'ab or Waqab) was initially settled by ancient migrants from the Malay Peninsula, the Indonesian Archipelago, New Guinea, and the Solomon Islands. The is related to the Malay languages of Southeast Asia, though with strong New Guinean influences. In contrast, the people of Yap's outer islands are descendants of Polynesian settlers, and as such have significant ethnic dissimilarities from the people of Yap Proper. Their culture and languages (Ulithian and Woleaian) are closely related to those of the neighboring islands of .

The Yapese and outer island Yapese were some of the most renowned navigators in the Pacific. Yapese sailors travelled phenomenal distances in outrigger canoes, without the aid of a compass, navigating by the stars and the patterns of ocean waves. During pre-colonial times, the people of Yap Proper established an island empire and dominion over what are now the outer islands of Yap State. Beginning in the 19th century, Yap was colonized by the Spanish, Germans, and Japanese in succession.

Yapese society is based on a highly complex caste system involving at least seven tiers of rank. Historically, the caste rank of an entire village could rise or fall in comparison to other villages depending on how it fared in inter-village conflicts. Winning villages would rise in rank while, as a part of a peace settlement, losing villages would have to accept decline in comparative rank. In many cases lower ranked villages were required to pay tribute to higher ranked villages. Further, dietary taboos might be imposed on lower ranking villages, i.e. they might be prohibited from harvesting and eating the more desirable fish and animals of the sea. Further, within each village each family had its own rank comparative to the others. Until the arrival of the German colonializers, the caste ranking system was fluid and the ranks of villages and families changed in response to inter-village intrigues and confrontations. In the late 19th century, however, the German colonial administration "pacified" Yap and enforced a prohibition against violent conflict. The caste ranking of each village in modern Yap thus remains the same as it was when the system was frozen in place by the Germans.

Yap was a major German naval communications center prior to the First World War. It was occupied by Japanese troops in September, 1914, and passed to the Japanese under the Versailles Treaty in 1919. In , Japanese-held Yap was one of the islands bypassed in the US "" strategy, although it was regularly bombed by US ships and aircraft, and Yap-based Japanese bombers did some damage in return. At the end of World War II, Yap was occupied by the U.S. military victors. The U.S. held it and the rest of the Caroline Islands as a trusteeship under a United Nations mandate (the "") until 1986. In that year, Yap, Truk, , and formed the independent nation of the Federated States of Micronesia. Under a with the United States, Micronesian citizens and goods are allowed entry into the U.S. with few restrictions.

receives service from , a subsidiary of .

Yap is also notable for giant s, which often congregate in the waters around the island, and have made it a top destination. Yap and other islands of Yap State were fictionalized in a sensitively humorous treatment in the novel "" by Christopher Moore.

Yap was also the location of a transmitter.