Jordanian occupation of the West Bank and East Jerusalem

Jordanian occupation of the West Bank and East Jerusalem

Map of the West Bank today

The West Bank and East Jerusalem were occupied [3][4] by Jordan (formerly Transjordan) for a period of nearly two decades (1948–1967) starting from the 1948 Arab-Israeli War. In 1950, the British extended formal recognition to the union between the Hashemite Kingdom and of that part of Palestine under Jordanian occupation and control - with the exception of Jerusalem. The British government stated that they regarded the provisions of the Anglo-Jordan Treaty of Alliance of 1948 as applicable to all the territory included in the union.[5] Despite Arab League opposition, the inhabitants of the West Bank became citizens of Jordan.

On 14 May 1948 Israel declared the establishment of the State of Israel based on the UN Partition Plan. The Jordanian Arab Legion under the leadership of Sir John Bagot Glubb, known as Glubb Pasha was given orders to enter Palestine, secure the UN designated Arab area, and then enter the Jerusalem corpus separatum as defined by the UN Partition Plan. See 1948 Arab-Israeli War Third phase: May 15, 1948 - June 11, 1948.

"A key feature of the Arabs' plans was the complete marginalization of the Palestinians. … This aptly reflected the political reality: The military defeats of April–May had rendered them insignificant. The Arab League through the first half of 1948 had consistently rejected Husseini's appeals to establish a government-in-exile. … Under strong pressure from Egypt, which feared complete Hashemite control over the Palestinians, the League Political Committee in mid-September authorized the establishment of a Palestinian 'government.'" (Benny Morris, Righteous Victims)

On September 22, 1948, the All-Palestine Government was established in Gaza captured by Egypt, and on September 30, the rival First Palestinian Congress, which promptly denounced the Gaza "government", was convened in Amman. The December 1948 Jericho Conference, a meeting of prominent Palestinian leaders and King Abdullah, voted in favor of annexation into what was then Transjordan.[6]

By the end of the war, Jordanian forces had control over the West Bank and East Jerusalem. On April 3, 1949, Israel and Jordan signed an Armistice Agreement. The main points included:

The remainder of the area that had been designated as Arab under the partition plan was partly occupied by Egypt (the Gaza Strip), partly occupied and annexed by Israel (West Negev, West Galilee, Jaffa). The intended international enclave of Jerusalem was divided between Israel and Jordan, both eventually annexing their portions.

The Jordanians immediately expelled all the Jewish residents of East Jerusalem. All but one of the 35 synagogues in the Old City were destroyed over the course of the next 19 years, either razed or used as stables and hen-houses. Many other historic and religiously significant buildings were replaced by modern structures.[7] The ancient Jewish cemetery on Mount of Olives was desecrated, and the tombstones there were used for construction, paving roads and lining latrines; the highway to the Intercontinental Hotel was built on top of the site.[8]

In March 1948 the British Cabinet had agreed that the civil and military authorities in Palestine should make no effort to oppose the setting up of a Jewish State or a move into Palestine from Transjordan.[9]

The United States, together with the United Kingdom favored the annexation by Transjordan of Arab Palestine. The UK preferred to permit King Abdullah to annex the territory at the earliest date, while the United States preferred to wait until after the conclusion of the Palestine Conciliation Commission brokered negotiations.[10]

Jordan’s annexation was widely regarded as illegal and void by the Arab League and others, including Israel.[11][12][13][14] Elihu Lauterpacht held that Jordan’s occupation of the area west of the Jordan "entirely lacked legal justification".[15] The move formed part of Jordan’s "Greater Syria Plan" expansionist policy,[16] and in response, Saudi Arabia, Lebanon and Syria joined Egypt in demanding Jordan’s expulsion from the Arab League.[17][18] A motion to expel Jordan from the League was prevented by the dissenting votes of Yemen and Iraq.[16] On June 12, 1950, the Arab League declared the annexation was a temporary, practical measure and that Jordan was holding the territory as a “trustee” pending a future settlement.[19][20] On July 27, 1953, King Hussein of Jordan announced that East Jerusalem was "the alternative capital of the Hashemite Kingdom" and would form an "integral and inseparable part" of Jordan.[21] In an address to parliament in Jerusalem in 1960, Hussein called the city the "second capital of the Hashemite Kingdom of Jordan".[22]

Only the United Kingdom formally recognized the annexation of the West Bank, de facto in the case of East Jerusalem.[23] The United States Department of State also recognized this extension of Jordanian sovereignty.[24][25] Pakistan is often claimed to have recognized Jordan's annexation too, but this is dubious.[26][27]

Tensions continued between Jordan and Israel through the early fifties, with Palestinian guerrillas and Israeli commandos crossing the Green Line despite the Jordanian army's efforts to prevent both occurrences. In retaliation for an attack by Palestinian infiltrators' killing of three Israeli civilians, 50 Palestinians died in an Israeli commando unit operation in the West Bank.[citation needed]

Abdullah I of Jordan, who had become Emir of Transjordan in 1921 and King in 1923, was assassinated in 1951 during a visit to the Al-Aqsa Mosque on the Temple Mount in East Jerusalem by a Palestinian gunman following rumours that he was discussing a peace treaty with Israel. The trial found that this assassination had been planned by Colonel Abdullah Tell, ex-military governor of Jerusalem, and Dr. Musa Abdullah Husseini. He was succeeded by his grandson King Hussein of Jordan once he came of age in 1953, after his father Talal's brief reign.

Despite Israeli pleas that Jordan remain neutral, on the war's second day Jordanian forces attacked Israeli-held West Jerusalem. The Israel Defense Force completely pushed the Jordanian, and Iraqi armies out of the West Bank and East Jerusalem. The formerly Jordanian-controlled West Bank and East Jerusalem with its one million Palestinian population came under Israeli military occupation. About 300,000 Palestinian refugees fled to Jordan. 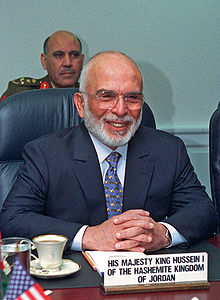 On July 31, 1988, Jordan ceded its claims to the West Bank — with the exception of guardianship over the Muslim Holy Sites of Jerusalem — to the Palestine Liberation Organization, as "the sole legitimate representative of the Palestinian people."[1][2]

The 1993 Oslo Accords between the PLO and Israel "opened the road for Jordan to proceed on its own negotiating track with Israel."[28] The Washington Declaration[29] was initialed one day after the Oslo Accords were signed. "On July 25, 1994, King Hussein met with Israeli Prime Minister Rabin in the Rose Garden of the White House, where they signed the Washington Declaration, formally ending the 46-year state of war between Jordan and Israel."[28] Finally, on October 26, 1994, Jordan signed the Israel-Jordan Treaty of Peace normalizing relations between the two countries and resolved territorial disputes between them.

Unlike any other Arab country to which they fled after the 1948 Arab-Israeli War, Palestinian refugees who found themselves in the West Bank and East Jerusalem (and on the East Bank) were given Jordanian citizenship on the same basis as existing residents. However, many of the refugees continued to live in camps and relied on UNRWA assistance for sustenance. Palestinian refugees constituted more than a third of the kingdom's population of 1.5 million.

In the Jordanian parliament, the West and East Banks received 30 seats each, having roughly equal populations. The first elections were held on 11 April 1950. Although the West Bank had not yet been annexed, its residents were permitted to vote. The last Jordanian elections in which West Bank residents would vote were those of April 1967, but their parliamentary representatives would continue in office until 1988, when West Bank seats were finally abolished.

Agriculture remained the primary activity of the territory. The West Bank, despite its smaller area, contained half of Jordan's agricultural land. In 1966, 43% of the labor force of 55,000 worked in agriculture, and 2,300 km² were under cultivation. (Numbers that have fallen considerably since.) In 1965, 15,000 workers were employed in industry, producing 7% of the GNP. This number fell after the 1967 war, and would not be surpassed until 1983.[30] The tourism industry also played an important role. 26 branches of 8 Arab banks were present. The Jordanian dinar became legal tender, and remains so there today.

There was a significant flow of population from the West Bank to East Bank, in particular to the capital, Amman.

The special committee which was supposed to make arrangements for visits to holy places was never formed. All Israelis (irrespective of their religion) were unable to enter the Old City and other holy sites.[31] A systematic destruction of the Jewish Quarter occurred, including many ancient synagogues.[32] Under Jordanian rule of East Jerusalem, The Jewish Cemetery on the Mount of Olives was desecrated, with gravestones used to build latrines for Jordanian army barracks,[33][34] and almost every synagogue was demolished in the period from 1948 to 1967.