Political status of the West Bank and Gaza Strip

Political status of the West Bank and Gaza Strip 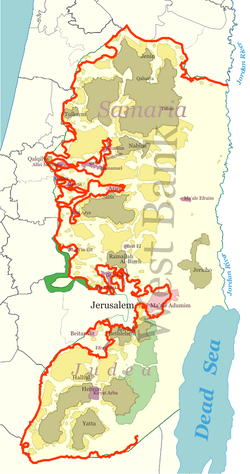 The Israeli Government-approved barrier route as of July 2006

The Israel-PLO Declaration of Principles on Interim Self-Government Arrangements (the DOP, better known as the Oslo accords), signed in Washington on 13 September 1993, provided for a transitional period not exceeding five years of Palestinian interim self-government in sections of the Gaza Strip and the West Bank. Under the DOP, Israel agreed to recognize the West Bank and the Gaza Strip as a "Single Territorial Unit" as well as to transfer certain powers and responsibilities to the Palestinian Authority, which includes the Palestinian Legislative Council elected in January 1996, as part of the interim self-governing arrangements in the West Bank and the Gaza Strip.

In US legal parlance, the term "Country" is used for any political entity known as a nation.[1] The US granted a request from the Palestinian National Authority for recognition of the West Bank and Gaza as a Country in view of developments including the Israeli-PLO Declaration of Principles on Interim Self-Government Arrangements. In a letter dated 13 January 1997, the Department of State advised the other agencies of the Executive branch that it considered the West Bank and the Gaza Strip to be one area for political, economic, legal and other purposes.[2] The Treasury Department subsequently stated that the country of origin markings of goods from the West Bank and Gaza shall not contain the words "Israel", "Made in Israel", "Occupied Territories-Israel", or words of similar meaning.

The DOP provides that Israel will retain responsibility during the transitional period for external security and for internal security and public order of Israeli settlements and citizens. Direct negotiations to determine the permanent status of Gaza and the West Bank had begun in September 1999 after a three-year hiatus, but have been derailed by the al-Aqsa Intifada that began in September 2000.

In 2003, the Israeli government issued a plan for total withdrawal from the Gaza Strip and part of the northern West Bank by late 2005. This became known as the Disengagement Plan. The Palestinian Authority welcomed this plan, but declared that until final status, it would still consider the Gaza Strip under Israeli occupation. Many Israelis opposed the plan, and tensions were very high in Israel before and after the Disengagement Plan was approved by the Israeli Knesset on 16 February 2005.

In August 2005, the Israel Defense Forces and Israeli police forcibly removed all settlers from the Gaza Strip. Israel completed the disengagement on 12 September 2005. Presently, most of the West Bank is administered by Israel though 42% of it is under varying degrees of autonomous rule by the Fatah-run Palestinian Authority. The Gaza Strip is currently under the control of Hamas.

The International Criminal Court (ICC) is an independent international treaty organization with its own legislative assembly. Many of the member states recognize the State of Palestine. The Palestinian Foreign Minister Riad al-Malki presented the ICC prosecutor with documentary evidence which shows that 67 states in Latin America, Asia, Africa, and Europe have legally recognized the State of Palestine.[3]

In January 2010, King Abdullah of Jordan, after a meeting with the Israeli president Shimon Peres at the World Economic Forum in Davos, declared that his country does not want to rule the West Bank and that "the two-state solution" to the Israeli-Palestinian conflict was the only viable option. If rule over the territory was to be transferred to the kingdom, it would only "replace Israeli military rule with Jordanian military rule... and the Palestinians want their own state".[4]