Church of the Nativity 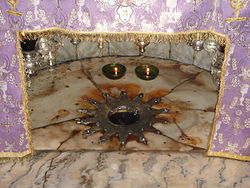 This silver star, beneath the altar in the Grotto of the Nativity, marks the spot believed to be the Birthplace of Jesus.

The Church of the Nativity (Arabic: كنيسة المهد‎) in Bethlehem is one of the oldest continuously operating churches in the world. The structure is built over the cave that tradition marks as the birthplace of Jesus of Nazareth, and thus it is considered sacred by Christians. The site is also revered by followers of Islam (see Jesus in Islam).

The antiquity of this tradition is attested by the Christian apologist Justin Martyr (c. 100 - 165), who noted in his Dialogue with Trypho that the Holy Family had taken refuge in a cave outside of town:

Joseph took up his quarters in a certain cave near the village; and while they were there Mary brought forth the Christ and placed Him in a manger, and here the Magi who came from Arabia found Him.(chapter LXXVIII).

In Bethlehem the cave is pointed out where He was born, and the manger in the cave where He was wrapped in swaddling clothes. And the rumor is in those places, and among foreigners of the Faith, that indeed Jesus was born in this cave who is worshipped and reverenced by the Christians. (Contra Celsum, book I, chapter LI). 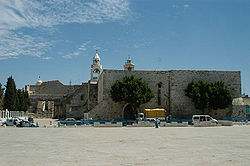 View of The Church of the Nativity from Manger Square.

The first basilica on this site was begun by Saint Helena, the mother of the Emperor Constantine I. Under the supervision of Bishop Makarios of Jerusalem, the construction started in 327 and was completed in 333. That structure was burnt down in the Samaritan Revolt of 529.

The current basilica was rebuilt in its present form in 565 by the Emperor Justinian I. When the Persians under Chosroes II invaded in 614, they unexpectedly did not destroy the structure. According to legend, their commander Shahrbaraz was moved by the depiction inside the church of the Three Magi wearing Persian clothing, and commanded that the building be spared. The Crusaders made further repairs and additions to the building during the Latin Kingdom of Jerusalem with permission and help given by the Byzantine Emperor, and the first King of Jerusalem was crowned in the church. Over the years, the compound has been expanded, and today it covers approximately 12,000 square meters. The church was one of the direct causes for French involvement in the Crimean War against Russia.

The church is administered jointly by Roman Catholic, Greek Orthodox and Armenian Apostolic authorities. All three traditions maintain monastic communities on the site.

The structure is actually a combination of two churches, with a crypt beneath—the Grotto of the Nativity—where Jesus was born: 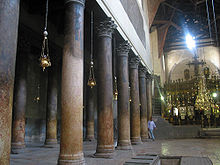 Interior of the Church of the Nativity

The Altar of the Nativity, beneath which is the star marking the spot where tradition says the Virgin Mary gave birth to Jesus. 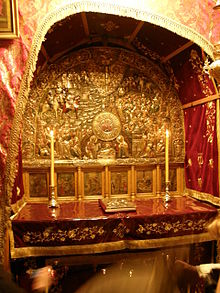 The upper part of the Altar of the Nativity. 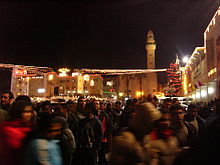 The Greek Orthodox Patriarchate of Jerusalem and the Armenian Apostolic Church follow the Julian Calendar liturgically, whereas the Roman Catholic Church follows the modern Gregorian Calendar. Thus Christmas Eve services for the Eastern and Western confessions will be held on different days. The Roman Catholic Church will celebrate the Nativity on December 25; the Orthodox Church will celebrate the Nativity on January 7. 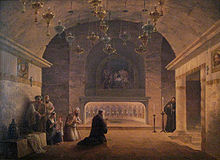 The basilica was placed on the 2008 Watch List of the 100 Most Endangered Sites by the World Monuments Fund:

The present state of the church is worrying. Many roof timbers are rotting, and have not been replaced since the 19th century. The rainwater that seeps into the building not only accelerates the rotting of the wood and damages the structural integrity of the building, but also damages the 12th-century wall mosaics and paintings. The influx of water also means that there is an ever-present chance of an electrical fire. If another earthquake were to occur on the scale of the one of 1834, the result would most likely be catastrophic. ... It is hoped that the listing will encourage its preservation, including getting the three custodians of the church - the Greek Orthodox Church, the Armenian Orthodox Church, and the Franciscan order - to work together, which has not happened for hundreds of years. The Israeli government and the Palestinian Authority would also have to work together to protect it.

[citation needed] [2] In 2010, the Palestinian Authority announced that a multi-million dollar restoration program was imminent.[3][dead link]

According to some scholars[4], the church is built over a cave that was originally a shrine to Adonis-Tammuz.

The Church Father Jerome, who died in Bethlehem in 420, reports in addition that the holy cave was at one point consecrated by the heathen to the worship of Adonis, and a pleasant sacred grove planted before it, to wipe out the memory of Jesus. Modern mythologists, however, reverse the supposition, insisting that the cult of Adonis-Tammuz originated the shrine and that it was the Christians who took it over, substituting the worship of their own God.[5]