The Mongol Invasion of Poland from late 1240 to 1241 culminated in the battle of Legnica, where the Mongols defeated an alliance which included forces from fragmented Poland and members of various Christian military orders, led by Henry II the Pious, the Duke of Silesia.

The Mongols invaded Europe with three armies. One of the three armies was tasked with distracting Poland, before joining the main Mongol force invading Hungary. That army, under Baidar, Kadan and Orda Khan, began scouting operations in late 1240.[3] 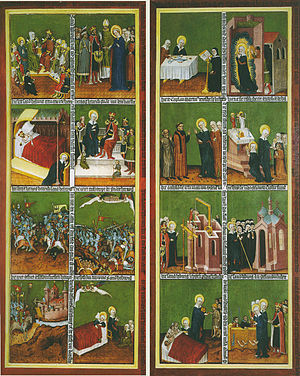 Battle of Legnica, 1241. From a medieval illuminated manuscript.

Mongol tumen, moving from recently conquered Volodymyr-Volynskyi in Kievan Rus, first sacked Lublin,[4] then besieged and sacked Sandomierz (which fell on 13 February).[4] Around this time, their forces split.[4] Orda's forces devastated central Poland, moving to Wolbórz and as far north as Łęczyca, before turning south and heading via Sieradz towards Wrocław.[4] Baidar and Kadan ravaged the southern part of Poland, moving to Chmielnik, Kraków, Bytom, Opole and finally, Legnica, before leaving Polish lands heading west and south.[4]

Baidar and Kadan on 13 February defeated a Polish army under the voivode of Kraków, Włodzimierz, in the battle of Tursk.[5] On 18 March they defeated another Polish army with units from Kraków and Sandomierz at the battle of Chmielnik.[5] Panic spread through the Polish lands, and the citizens abandoned Kraków, which was seized and burned by the Mongols by March 24.[5] In the meantime, one of the most powerful contemporary Dukes of Poland, and Duke of Silesia, Henry II the Pious, gathered his forces and allies around Legnica.[5] Henry, in order to gather more forces, even sacrificed one of the largest towns of Silesia, Wrocław (Breslau), abandoning it to the Mongols.[5] Henry was also waiting for Wenceslaus I of Bohemia, his brother-in-law, who was coming to his aid with a large army.[5]

While considering whether to besiege Wrocław, Baidar and Kadan received reports that the Bohemians were days away with a large army.[5] The Mongols turned from Wrocław, not finishing the siege, in order to intercept Henry's forces before the European armies could meet.[5] The Mongols caught up with Henry near Legnica at Legnickie Pole ("Field of Legnica"), known to Germans as Wahlstatt ("Battlefield")[6]. Henry, in addition to his own forces, was aided by Mieszko II the Fat (Mieszko II Otyły), as well as remnants of Polish armies defeated at Tursk and Chmielnik, members of military orders and small numbers of foreign volunteers.[5]

Henry, despite having rough parity in numbers and a sound strategy, was defeated at Legnica on April 9 after the Mongols caused confusion in the Polish forces.[7] The Mongols did not take Legnica castle, but had a free rein to pillage and plunder Silesia, before moving off to join their main forces in Hungary.[8]

The Mongols avoided the Bohemian forces, but defeated the Hungarians in the Battle of Mohi.[8] But news that the Grand Khan Ögedei had died the previous year caused the descendants of the Grand Khan to return to the Mongol capital of Karakorum for the kurultai which would elect the next Khagan, and probably saved the Polish lands from being completely overrun by the Mongols.[8]

The death of Duke Henry, who was close to unifying the Polish lands and reversing their fragmentation, set back the unification of Poland, and also meant the loss of Silesia, which would drift outside the Polish sphere of influence until the unification took place in the 14th century.[9]

In 1259, 18 years after the first attack, two tumens (20,000 men) from the Golden Horde, under the leadership of Berke, attacked Poland after raiding Lithuania. This attack was commanded by Nogai Khan and general Burundai. Lublin, Sieradz, Sandomierz, Zawichost, Kraków, and Bytom were ravaged and plundered by Mongol army. Berke had no intention of occupying or conquering Poland. After this raid Pope Alexander IV tried without success to organize a crusade against the Tatars.

An unsuccessful raid followed in 1287, led by Talabuga and Nogai Khan. Lublin, Mazovia, Sandomierz and Sieradz were successfully raided, but they were defeated at Kraków. Despite this, Kraków was devastated. This raid consisted of less than one tumen, since the Golden Horde's armies were tied down in a new conflict which the Il-Khanate had initiated in 1284. The force sent was not sufficient to meet the full Polish army, nor did it have any siege engineers or equipment to breach city walls. It raided a few caravans, burned a few small towns, and fled when the Polish army was mustered.

In the coming centuries, the Kingdom of Poland (later, the Polish-Lithuanian Commonwealth) would have to deal with incursions and border conflicts by the Crimean Tatars, descendants of the Mongols.

In Kraków, the legacy of the Mongol invasions is found in the traditions of lajkonik and hejnał mariacki.