The Kingdom of Bohemia (Czech: České království; German: Königreich Böhmen; Latin: Regnum Bohemiae) was a country located in the region of Bohemia in Central Europe, most of whose territory is currently located in the modern-day Czech Republic. The King was Elector of Holy Roman Empire until its dissolution in 1806, whereupon it became part of the Austrian Empire, and subsequently the Austro-Hungarian Empire from 1867. Following the defeat of the Central Powers in World War I, both Kingdom and Empire were dissolved and Bohemia became part of the newly formed Czechoslovak Republic.

Although some former rulers of Bohemia had enjoyed a non-hereditary royal title during the 11th and 12th century (Vratislaus II, Vladislaus II), the kingdom was formally established in 1198 by Ottokar I, who had his regality acknowledged by Philip of Swabia, elected King of the Romans, in turn for his support against the rival Emperor Otto IV. In 1204 Ottokar's royal dignity was accepted by Otto IV himself as well as by Pope Innocent III and afterwards definitely confirmed by the Golden Bull of Sicily issued by Emperor Frederick II in 1212, promoting the Duchy of Bohemia to the Kingdom status. Incorporated into the Habsburg Monarchy from 1526, it was dissolved in 1918 with the fall of Austria–Hungary, when the last Bohemian king, Charles I of Austria, was forced out of power without abdicating. The national assembly at Prague then deposed the Habsburg (Habsburg-Lorraine) dynasty and proclaimed the Czechoslovak Republic.

Bohemia proper (Čechy) with the County of Kladsko (Hrabství kladské) was the main area of the Kingdom of Bohemia and from 1348 Charles IV created Lands of the Bohemian Crown (Země Koruny české), together with the incorporated provinces: 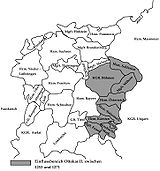 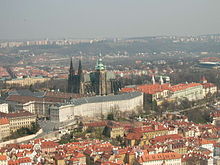 Prague Castle – the ancient seat of Bohemian dukes, kings and emperors; after 1918 office of the Czechoslovak and Czech presidents

During the reign of the last Přemyslids and the succeeding House of Luxembourg the Bohemian kingdom was the most powerful state of the Holy Roman Empire.[citation needed] King Wenceslaus II was crowned King of Poland in 1300, his son Wenceslaus III King of Hungary one year later. Though both crowns were lost after Wenceslaus' III assassination in 1306, the rise of Bohemia continued, when in 1346 the heir to the Bohemian throne, Charles of Luxembourg was elected King of the Romans and crowned Holy Roman Emperor in 1355. The issue of the 1356 Golden Bull together with the following acquisition of the Brandenburg Electorate gave the Bohemian Kingdom two votes in the electoral college. Charles made Prague the Imperial residence and his son King Sigismund again acquired the Hungarian crown by marriage with queen regnant Mary of Hungary in 1385. His successors – Ladislaus the Posthumous from Habsburg dynasty, George of Podiebrad and the rulers of the Jagiellon dynasty – strengthening the status of Bohemia as an autonomous part of the Empire. In turn King Vladislav Jagiellon was disqualified by the prince-electors from taking part in the 1486 election of Maximilian I of Habsburg in 1486. The estrangement from the Empire continued after Vladislav had succeeded Matthias Corvinus of Hungary in 1490 and both the Bohemian and the Hungarian kingdom were held in personal union. Not considered an Imperial State, the Lands of the Bohemian Crown were not part of the Imperial Circles established by the 1500 Imperial Reform. 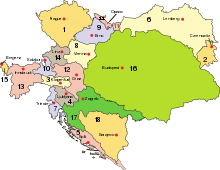 After the early death of King Louis II Jagiellon at the Battle of Mohács in 1526, the Bohemian kingdom was inherited by his brother-in-law, the Austrian Archduke Ferdinand I of Habsburg, younger brother of Emperor Charles V, whom he succeeded in 1558. The subsequent incorporation of Bohemia into the Habsburg Monarchy against the resistance of the local Protestant nobility sparked off the 1618 Defenestration of Prague and the Thirty Years' War. Their defeat at the Battle of White Mountain in 1620 put an end to the Bohemian autonomy movement.

With the dissolution of the Holy Roman Empire in 1806, the Bohemian kingdom was incorporated into the Austrian Empire and the royal title retained by the Emperor of Austria. In the course of the 1867 Austro-Hungarian Compromise the provinces of Bohemia, Moravia and Austrian Silesia became k. k. crown lands of Cisleithania.

The current Czech Republic consisting of Bohemia, Moravia and Czech Silesia still uses some symbols of the Kingdom of Bohemia: a two-tailed lion in its coat-of-arms, red-white strips in the state flag and the royal castle as the president's office. 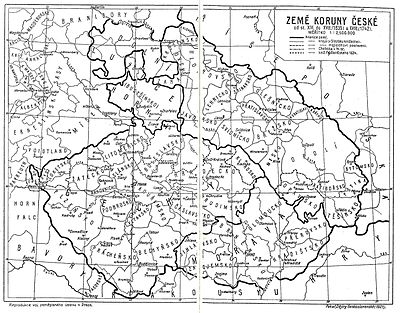 Lands of the Bohemian Crown until 1635. (Including internal partition.) A map by Josef Pekař, 1921