Mongol invasions progressed throughout the 13th century, resulting in the vast Mongol Empire which covered much of Asia and Eastern Europe by 1300.

The Mongol Empire emerged in the course of the 13th century by a series of conquests and invasions throughout Central and Western Asia, reaching Eastern Europe by the 1240s. The speed and extent of territorial expansion parallels the Hunnic/Turkic conquests of the Migration period (the 6th century Turkic Khaganate).

The territorial gains of the Mongols persisted into the 15th century in Persia (Timurid dynasty) and in Russia (Tatar and Mongol raids against Russian states), and into the 19th century in India (the Mughal Empire).

Genghis Khan forged the initial Mongol Empire in Central Asia, starting with the unification of the Mongol and Turkic central Asian confederations such as Merkits, Tartars, Mongols, and Uighurs. He then continued expansion of the Empire via invasion of the Khwarezmid Empire in what is modern-day Iran.

Large areas of Islamic Central Asia and northeastern Iran were seriously depopulated,[1] as every city or town that resisted the Mongols was subject to destruction. In Termez, on the Oxus: "all the people, both men and women, were driven out onto the plain, and divided in accordance with their usual custom, then they were all slain". Each soldier was required to execute a certain number of persons, with the number varying according to circumstances. For example, after the conquest of Urgench, each Mongol warrior – in an army group that might have consisted of two tumens (units of 10,000) – was required to execute 24 people.[2]

The Mongols conquered, either by force or voluntary submission, the areas today known as Iran, Iraq, Syria, and parts of Turkey, with further Mongol raids reaching southwards as far as Gaza into the Palestine region in 1260 and 1300. The major battles were the Siege of Baghdad (1258), when the Mongols sacked the city which for 500 years had been the center of Islamic power; and the Battle of Ain Jalut in 1260, when the Muslim Egyptian Mamluks, were for the first time able to stop the Mongol advance at Ain Jalut, in the northern part of what today is known as the West Bank.

The Mongols were never able to expand farther than the Middle East due to a combination of political and geographic factors, such as lack of sufficient grazing room for their horses.

Genghis Khan and his descendants invaded China, and forced Korea to become a vassal through an invasion of Korea. They attempted an invasion of Japan and Vietnam. Their biggest conquest was in conquering China and setting up their own Yuan Dynasty, though it was eventually overthrown by the native Chinese in 1368, who launched their own Ming Dynasty.

The Mongols invaded and destroyed Kievan Rus, also invading Poland and Hungary, among others. Over the course of three years (1237–1240), the Mongols destroyed and annihilated all of the major cities of Eastern Europe with the exceptions of Novgorod and Pskov.[3]

Giovanni de Plano Carpini, the Pope's envoy to the Mongol Great Khan, traveled through Kiev in February 1246 and wrote:

"They [the Mongols] attacked Rus, where they made great havoc, destroying cities and fortresses and slaughtering men; and they laid siege to Kiev, the capital of Rus; after they had besieged the city for a long time, they took it and put the inhabitants to death. When we were journeying through that land we came across countless skulls and bones of dead men lying about on the ground. Kiev had been a very large and thickly populated town, but now it has been reduced almost to nothing, for there are at the present time scarce two hundred houses there and the inhabitants are kept in complete slavery."[4] 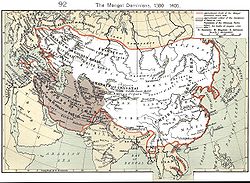 The Mongol world, ca. 1300. The gray area is the later Timurid empire.

The early Mongol Empire was divided into five main parts[5] and various appanage khanates. The most prominent sections were:

When Genghis Khan was campaigning in Central Asia, his general Muqali (1170–1223) attempted to set up provinces and establish branch departments of state affairs. Genghis's successor Ogedei abolished them, instead dividing the areas of North China into 10 routes (lu, 路) according to the suggestion of Yelü Chucai, a prominent Confucian statesman of Khitan ethnicity. Ogedei also divided the empire into separate Beshbalik and Yanjing administrations, while the Headquarters in Karakorum directly dealt with Manchuria, Mongolia and Southern Siberia. Late in Ogedei's reign, an Amu Darya administration was established. Under Mongke, these administrations were renamed Branch Departments.

Kublai Khan, the founder of the Yuan Dynasty, made significant reforms to the existing institutions. He established the Yuan Dynasty in 1271 and assumed the role of a Chinese emperor. The Yuan forces seized South China by defeating the Southern Song Dynasty, and Kublai became the emperor of all China. The territory of the Yuan Dynasty was divided into the Central Region (腹裏) and places under control of various Xing Zhongshusheng (行中書省, "branch secretariats") or the Xuanzheng Institute (宣政院).

The Mongol Empire at its greatest extent included all of modern-day Mongolia, China, parts of Burma, Romania, Pakistan, much or all of Russia, Siberia, Ukraine, Belarus, Cilicia, Anatolia, Georgia, Armenia, Persia, Iraq, and Central Asia. In the meantime, many countries became vassals or tributary states of the Mongol Empire.