The Mongol invasion of China lasted over 6 decades and particularly involved the defeat of the Jin Dynasty, Western Xia, the Dali Kingdom, and the Southern Song, which finally fell in year 1276. The Mongols under Kublai Khan established the Yuan Dynasty in China and crushed the last Song resistance in 1279, which marked the onset of all of China under the Yuan. This was the first time that whole China was ruled by a non-Chinese ruler. 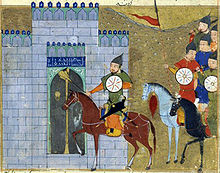 At the time of the kurultai, Genghis Khan was involved in a dispute with Western Xia — which eventually became the first of his wars of conquest. Despite problems in taking well-defended Western Xia cities, he substantially reduced the Western Xia dominion by 1209, when peace with Western Xia was made. He was acknowledged by their emperor as overlord. This marks the first in a line of successes in defeating all the kingdoms and dynasties in China which wasn't complete until Kublai Khan's rule. A major goal of Genghis was the conquest of the Jin Dynasty with the aid of the Song Dynasty, allowing the Mongols to avenge earlier death of a Mongol Khan, gain the riches of northern China and mostly to establish the Mongols as a major power among the Chinese world order.

Chingis Khan (Genghis Khan) declared war in 1211, and at first the pattern of operations against the Jin Dynasty was the same as it had been against Western Xia. The Mongols were victorious in the field, but they were frustrated in their efforts to take major cities. In his typically logical and determined fashion, Genghis and his highly developed staff studied the problems of the assault of fortifications. With the help of Chinese engineers, they gradually developed the techniques to take down fortifications. Islamic engineers joined later and especially contributed counterweight trebuchets, "Muslim phao", which had a maximum range of 300 metres compared to 150 metres of the ancient Chinese predecessor. It played a significant role in taking the Chinese strongholds and was as well used against infantry units on battlefield. This eventually would make troops under the Mongols some of the most accomplished and most successful besiegers in the history of warfare.

As a result of a number of overwhelming victories in the field and a few successes in the capture of fortifications deep within China, Genghis had conquered and consolidated Jin territory as far south as the Great Wall by 1213. He then advanced with three armies into the heart of Jin territory, between the Great Wall and the Yellow River. With the help of Chenyu Liu, one of the top officers who betrayed Jin, Genghis defeated the Jin forces, devastated northern China, captured numerous cities, and in 1215 besieged, captured and sacked the Jin capital of Yanjing (the modern-day Beijing). But the Jin emperor, Xuan Zong, did not surrender, but moved his capital to Kaifeng. There, his successors were eventually defeated in 1234.

When Genghis Khan united the Mongolian plateau, a small band of the Keraits under Nilqa Senggum sought refuge in Xi Xia, or Western Xia Dynasty. After his adherents took to plundering the locals, however, Nilqa Senggum was expelled from the Tangut territory.[1] In response to the initial offer of refuge, Genghis Khan launched his first campaign against the Xi Xia Dynasty in 1205.[2] The Mongols plundered border settlements and one of the local Tangut nobles accepted Mongol supremacy.[3] In 1207, Genghis sacked Wulahai, the main garrison along the Huang River. In 1209, the Khagan undertook a larger campaign to secure the submission of the Tanguts. He conquered Wulahai and followed up to the Huang River up to the capital, Zhongxing. Not only were the Xi Xia Dynasty well fortified, but they had some 150,000 soldiers, nearly twice the size of the army of Genghis.[4] He attempted to flood the capital by diverting the river. But the Mongols wiped out their own camp instead of the Tangut. Nevertheless, they survived their dangerous mistake. Even so, the Xia Emperor Li Anquan agreed to present a daughter to Genghis Khan together with a large tribute including camels. The Mongols left garrison and the Xi Xia entered the Mongol orbit.

In 1218, the Mongols invaded the Xia when the Emperor refused to send hostages and troops. They besieged the capital again, and the Xia Emperor Li Zunxu fled west, leaving his son to make peace.

The next year, when Genghis Khan demanded the Xia to contribute troops for his campaign against Khorazm, the vassal emperor of Western Xia had refused to take part in the campaign, and Genghis had vowed punishment. While he was in Central Asia, the Western Xia and the Jin had formed an alliance against the Mongols. After rest and a reorganization of his armies, Genghis prepared for war against his biggest foes. By this time, advancing years had led Genghis to prepare for the future and to assure an orderly succession among his descendants. He selected his third son Ogedei as his successor and established the method of selection of subsequent khans, specifying that they should come from his direct descendants. Meanwhile, he studied intelligence reports from Western Xia and Jin and readied a force of 180,000 troops for a new campaign.

Before his last campaign against the Xia, Genghis demanded the submission of the Xia. A Xia general declined the demand on behalf of the Xia Emperor. Mongol armies under Genghis quickly attacked the Xi Xia and besieged the capital of Xi Xia in 1227. The Tanguts surrendered right before Genghis died. After the Mongols captured the capital of the Xia, they massacred and pillaged what remained of the city and its inhabitants. The Tanguts left alive joined the service of the Mongol Empire, founding Mongol clan Tangud.

Mongke Khan dispatched Kublai to the Dali Kingdom in 1253 to outflank the Song. The Gao family, dominated the court, resisted and murdered Mongol envoys. The Mongols divided their forces into three. One wing rode eastward into the Sichuan basin. The second column under Uryankhadai took a difficult way into the mountains of western Sichuan.[5] Kublai himself headed south over the grasslands, meeting up with the first column. While Uryankhadai galloping in along the lakeside from the north, Kublai took the capital city of Dali and spared the residents despite the slaying of his ambassadors. The Mongols appointed King Duan Xingzhi as local ruler and stationed a pacification commissioner there.[6] After Kublai's departure, unrest broke out among the Black jang. By 1256, Uryankhadai, the son of Subotai had completely pacified Yunnan.

At first, the Mongols allied with Song China as both had a common enemy in the form of Jin. However, this alliance broke down with the destruction of Jur'chen Jin in 1234. After Song forces captured the former Chinese capitals of Luoyang, Chang'an and Kaifeng from the Mongols and killed a Mongol ambassador, the Mongols declared war. Very soon, the Mongol armies had forced the Song back to the Yangtze, and the two sides would be engaged in a four-decade war until the fall of the Song in 1276.

While the Mongol forces had success against the non-Han Chinese states of the Jin and Xia, conquering the Song took much more time. The Song forces were equipped with the best technology available at the time, such as a plethora of gunpowder weapons like fire lances, rockets and flamethrowers. However, intrigues at the Song court would favour the Mongols.

After several indecisive wars, the Mongols unsuccessfully attacked the Song garrison at Hechuan when their Great Khan, Mongke, died of cholera or dysentry. However, the general responsible for this defence was not rewarded and instead punished by the Song court. Discouraged, he defected to the Mongols. He suggested to Mongke's successor, Kublai, that the key to the conquest of Song was the capture of Xiangyang, a vital Song stronghold. 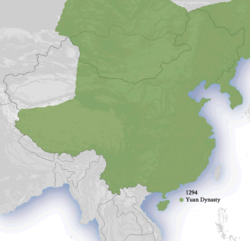 The Yuan Dynasty under Kublai Khan after the conquest of Southern Song Dynasty.

The Mongols quickly enclosed Xiangyang and defeated any attempt to reinforce it by the Song. After a siege that lasted several years, and with the help of Muslim artillery created by Iraqi engineers, the Mongols finally forced the city of Xiangyang to surrender. The dying Song Dynasty sent its armies against the Mongols at Yehue under the incompetent chancellor Jia Sidao. Predictably, the battle was a disaster. Running out of troops and supplies, the Song court surrendered to the Mongols in 1276.

With the desire to rule all of China, Kublai established the Yuan Dynasty and became Emperor of China. However, despite the surrender of the Song court, resistance of the Song remnants continued. In an attempt to restore the Song dynasty, several Song officials set up a government in Guangdong, aboard the vast Song navy, which still maintained over a thousand ships. Realizing this, Kublai sent his fleet to engage the Song fleet at the battle of Yamen in 1279, winning a decisive victory in which the last Song emperor and his loyal officials committed suicide. Following this, the Mongols established their rule over all of China. The Yuan Dynasty had ruled China for about a century, until the fall of Dadu in 1368.