Oxenhope
Not to be confused with Oxenholme.

Oxenhope is a village and civil parish with a population of 2,476 in the metropolitan borough of Bradford, West Yorkshire, England, near Keighley.[1] Oxenhope railway station is the terminus for the Keighley and Worth Valley Railway. Each year in summer the village holds The Oxenhope Straw Race, a team event in which competitors complete a 2.5-mile course around the village carrying a bale of straw and stopping at each pub on the route for a pint of beer. Many contestants choose to dress up in costumes. The event benefits local charities and always draws many spectators. 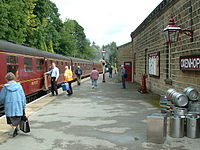 The Platform, Oxenhope Railway Station, terminus of the Keighley and Worth Valley Railway, 2006

The modern village of Oxenhope encompasses what were originally separate settlements of Uppertown, Lowertown, Leeming and Hawkingstone. The historic hamlets of Marsh and Shaw are also included in modern day Oxenhope. The area became known as Oxenhope because this was the name the railway company gave the station serving the area when the line from Keighley opened in 1867. Until then the name Oxenhope referred to a small settlement between the hamlet of Marsh and the village of Haworth.

The street pattern of Oxenhope was much altered when the railway arrived. It had originally been intended that the railway would run only to Haworth. The owners of Lowertown Mill, Oxenhope, persuaded the railway company to extend the line to Oxenhope. It was found impracticable, however, to take the railway as far as Lowertown because of the gradients that would have been required. As a compromise, the railway built a road from its station to Lowertown, appropriately named Station Road. The bridge by which this road crosses Leeming Water is of the same construction as many of the railway's bridges.

The 19th-century parish church of St Mary the Virgin has some interesting glass by the William Morris company.