Yorkshire and the Humber

Yorkshire and the Humber

In the Yorkshire and Humberside region there is a very close relationship between the major areas and the underlying geology.

The region is drained by several rivers. In western and central Yorkshire the many rivers empty their waters into the River Ouse which reaches the via the .

The Ouse is the name given to the river after its confluence with the Ure at Ouse Gill Beck. The , which drains , joins the Ouse upstream of . The Rivers Aire and Calder are more southerly contributors to the River Ouse and the most southerly Yorkshire tributary is the River Don, which flows northwards to join the main river at . In the far north of the county the flows eastwards through and empties its waters into the North Sea downstream of . The smaller River Esk flows from west to east at the northern foot of the North York Moors to reach the sea at .

The River Derwent rises on the North York Moors, flows south then westwards through the then turns south again to drain the eastern part of the Vale of York. It empties into the River Ouse at . To the east of the Yorkshire Wolds the flows southwards to join the Humber Estuary at . The western Pennines are served by the which drains westwards into the close to .

The highest point of the region is , in the , at convert|737|m|ft|lk=on. The largest freshwater lake is in the .

This region of generally has cool summers and relatively mild winters with the upland areas of the and the experiencing the coolest weather and the the warmest. Weather conditions vary from day to day as well as from season to season. The latitude of the area means that it is influenced by predominantly westerly winds with depressions and their associated fronts, bringing with them unsettled and windy weather, particularly in winter. Between depressions there are often small mobile anticyclones that bring periods of fair weather. In winter s bring cold dry weather. In summer the anticyclones tend to bring dry settled conditions which can lead to drought. For its latitude this area is mild in winter and cooler in summer due to the influence of the in the northern .Air temperature varies on a daily and seasonal basis. The temperature is usually lower at night and January is the coldest time of the year and July is usually the warmest month. [ cite web|url=http://www.metoffice.gov.uk/climate/uk/location/england/ |title=English Climate |accessdate=2008-05-03 |publisher=Met Office ]

It was originally called Yorkshire and Humberside, and defined as , , and . Since then, Humberside has been abolished, and the councils of West and South Yorkshire abolished. The older form of the name is still occasionally seen.

The is a partnership of all local authorities in the region and representatives of various economic, social and environmental sectors.The full Assembly normally meets three times a year, normally in February, June and October.

The full Assembly is responsible for providing regional leadership, agreeing regional strategic priorities, directing the development of the Integrated Regional Framework and endorsing key regional strategies. Membership comprises all 22 local authorities in this region, plus 15 Social, Economic and Environmental partners, and the National Parks for planning purposes. [ cite web|url=http://www.yhassembly.gov.uk/About%20Us/What%20is%20the%20Assembly%20and%20how%20does%20it%20work/ |title=What is the Assembly and how does it work? |accessdate=2008-05-12 ]

Yorkshire is one of the two regions (along with the North West) that were expected to have a referendum about the establishment of an elected regional assembly. When the North East region of England rejected having an elected regional assembly in a referendum, the then Deputy Prime Minister announced that he would not move orders for other referenda before the relevant provisions expired in June, 2005. The Yorkshire and Humberside Assembly is based on "King Street" in . [ cite web|url=http://www.yhassembly.gov.uk/ |title=Yorkshire and Humber Assembly |accessdate=2008-05-12 ]

The European constituency of Yorkshire and the Humber is coterminous with the English region.

The is Yorkshire's main east-west thoroughfare, and north-south routes are the M1 and the A1, with only the A1 continuing further north. The other main north south road in the region is the A19.

Airports in the region are at Yeadon, near and near in . serves the northernmost areas of the region, and there are day and night direct rail connections from the region to . [cite web
url=http://www.yorkshirenet.co.uk/links-travel.asp?showsub=airlines,airports,ferries,canal%20holidays
title=Yorkshire travel information centre, Airlines, Airports, Ferries, Canal Holidays, Yorkshire, Northern England
publisher=www.yorkshirenet.co.uk
accessdate=2008-10-05
last=
first=]

The central hubs of the rail network in the region are Leeds, Sheffield and York. The passes through and whilst the finishes at , with a less regular service to Leeds, operated by . East-west routes are the to Manchester, and through Doncaster. [cite web
url=http://www.networkrailmediacentre.co.uk/Content/Detail.asp?ReleaseID=3919&NewsAreaID=2&SearchCategoryID=2
title=Network Rail
publisher=www.networkrailmediacentre.co.uk
accessdate=2008-10-05
last=
first=]

is the charged with improving the Yorkshire and Humber economy, where some 270,000 businesses contribute to an economy worth in excess of £80 billion. With over 5 million people living in the region it ranks alongside some small countries including Ireland, Greece, Norway and Singapore. [ cite web|url=http://www.yorkshire-forward.com/www/index.asp |title=Yorkshire Forward |accessdate=2008-05-12 ]

Yorkshire in the past has been synonymous with mining. Many pits closed in the 1990s, with only two in the Pontefract area left at Kellingley and Sharlston. The NUM was very Yorkshire-dominated. Coal still plays a part in the economy - there are three large power stations along the Aire Valley, with Drax being the second largest in Europe with 3,945 MW of capacity. The distribution area once looked after by the regional electricity company is now looked after by YEDL, owned by . 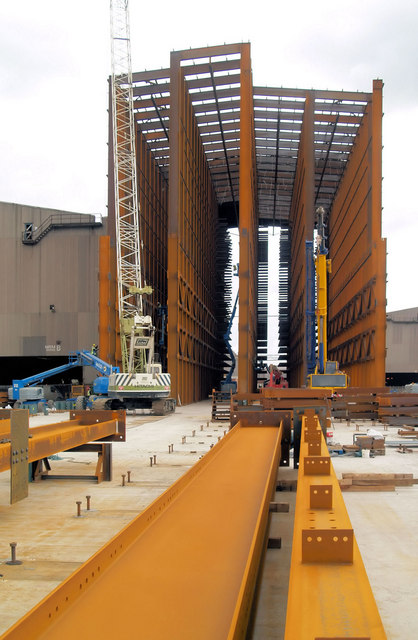 is where steel is smelted by Corus. is home of (what is left of) Britain's fishing industry, and has many frozen food factories such as . There are two large oil refineries at , and a chemical works at Saltend in Hull. , the chemical company, is in . in the UK are based in York, with operations in Halifax, as is and . and medical and household products companies originated in Hull, and still have large factories there. There are many RAF bases in , close to the A1. McCain is in Scarborough.

Sheffield is known for its steel industry, which has declined in recent years. are based there, in Carbrook near the . are in . is at near Barnsley. DFS is at . near the A1/A638 junction. products are made at Colton near the M1 junction and . is in . is based in Chapeltown in . is based between Swinton and . is based on the former site of in .

Schools are mostly comprehensive, with some grammar schools in North Yorkshire, Calderdale and Kirklees. [cite web
url=http://www.schoolswebdirectory.co.uk/
title=Schools Web Directory UK
publisher=www.schoolswebdirectory.co.uk
accessdate=2008-10-01] The schools in Hull perform the second-worst in England at GCSE [cite web
url=http://www.hullcc.gov.uk/portal/page?_pageid=221,137365&_dad=portal&_schema=PORTAL
title=Hull City Council : School performance
publisher=www.hullcc.gov.uk
accessdate=2008-10-01] after Knowsley in Merseyside. Also at GCSE, schools in Barnsley, Bradford, and Doncaster have low-achieving results with Barnsley the worst of these. All four of these areas coincidentally have an above-average teenage pregnancy problem. For the metropolitan areas, Calderdale and Wakefield consistently perform the best, although slightly under the England average. York and North Yorkshire perform the best at GCSE in the region, and with the East Riding of Yorkshire have results above the UK average. At A-level North Lincolnshire, Kirklees, York and North Yorkshire perform quite well with Kirklees being the best by a large margin, all having results above the England average. The excellent Kirklees result is due to Greenhead College in Huddersfield, and North Lincolnshire's results are due to the , also a . The districts of South Yorkshire perform the least in the area at A-level with Rotherham having the best results in this area, and all of these districts achieve similar results, much lower than those in the former districts of Humberside. For both A-level and GCSE, Barnsley and Bradford are very low performing, with Bradford getting the lowest A-level results in the region. Hull and northern Lincolnshire have a wide socio-economic diversity &ndash; many under-achieving pupils at 16 but with high performers at A-level. [cite web
url=http://www.schoolswebdirectory.co.uk/maps.php?region=yo
title=Schools Web Directory UK
publisher=www.schoolswebdirectory.co.uk
accessdate=2008-10-01]