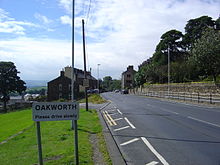 Oakworth is a village in West Yorkshire, England, near Keighley, by the River Worth. The name "Oakworth" indicates that the village was first established in a heavily wooded area.

Oakworth railway station is on the route of the Keighley and Worth Valley Railway and was a location in the film The Railway Children.

Holden Park in Oakworth occupies the grounds of an historic house owned by Sir Isaac Holden, an inventor who is said to have invented the lucifer match and revolutionised the process of wool carding. After Holden's death in 1897, his house, called Oakworth House, and its contents were sold at auction, and the house was all but destroyed by fire in 1907. All that remains of the original building is the portico.

Oakworth Primary School is situated in the grounds of Sir Isaac Holden's estate, along with Holden Park. The school playground has sloping sides because it was once a lake in the ornamental gardens in front of Oakworth House.[citation needed] The school is attended by children aged between 3 - 11. It has gone through many changes since it was first built. Its original name was 'Oakworth First School', which taught children up to the age of 9, when children would then progress to middle school. This system changed in 2000, so that Oakworth Primary School expanded to cover years 5 and 6.[citation needed]