Oakworth Hall is located in Oakworth, West Yorkshire, England. The manor house was rebuilt in the 17th century, but has a history dating back to 1066. The building overlooks the Worth Valley, facing south towards Haworth.

Nearby is Holden Park, which was the site of Oakworth House and its grounds, once owned by Sir Isaac Holden, an inventor who is said to have invented the lucifer match and revolutionised the process of carding wool. He also owned Oakworth Hall.

Lintel above the front door of Oakworth Hall 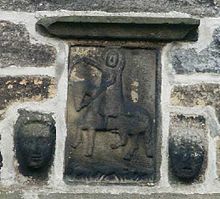 The Hall is located on the corner of Providence Lane, which once ran through the Hall's farmyard. The cornerstone on the north rear wall, above the door of the farm cottage, is one of four found in the district commissioned by John Craven in July 1843.

Of important historical interest is a carved stone panel of a mounted huntsman of either Celtic origins or Romano-British of the first centuries CE. Accompanying the huntsman there are three small animals which might be taken to be dogs, but in the History of Keighley they are described as "three goats trippant". A goat is featured on the coat of arms on one branch of the Copley family who were early residents of the Hall. The panel may be even earlier, perhaps pre-Roman Iron Age. Two crude heads, which are thought to be of the same period, flank the carving.

The lintel above the door on the north side of the farm cottage is a curiously carved stone with triple rounded arches and double spiral decorative motifs. Both this stone and the panel came from the surrounding moors and it is believed they were incorporated into the building for good luck.

All the original fireplaces have been preserved. There is a large inglenook fireplace, ten feet across, in the dining room. Next to the fireplace is a salt cellar. Salt was very important for the preservation of food and had to be stored in the driest place in the building. Stored in the salt cellar today is a pair of very small, leather, children's shoes which were discovered during restoration work on a chimney. Shoes were traditionally secreted away in the Middle Ages to ward off evil spirits and to bring good fortune to the residents of the Hall. Two oak beams in the dining room are 18 inches by 10 feet and actually extend throughout the Hall. The original adze marks are clearly in evidence.

In the kitchen there is an old oven. It has a cast iron interior and is surrounded by large stones. It is reputed to be the oldest oven in Yorkshire that is still capable of use. From the kitchen, steps lead down to a cellar. On the first floor, two of the six bedrooms have arched gothic style windows to provide light on the landing. The windows have stone mullions. All the doors are constructed of solid English oak and the handsome front door dates from when that part of the building was rebuilt in 1702.

In the study there is an original fireplace and cast iron stove. This is almost identical to the one in the later-built Brontë Parsonage Museum in nearby Haworth.

The Hall is a Grade II listed building and is subject to a Preservation Order.

The History of the Hall

(The families Clough, Haggas and Hattersly all became large textile manufacturers in the spinning and weaving industries in the West Riding of Yorkshire. The Cloughs became mohair spinners and weavers and the firm still exists today as British Mohair Spinners. Haggas became the largest worsted spinners in the area and there is still a large manufacturing plant in Keighley. The Hattersleys owned a number of worsted and woollen Mills and factories producing textile and weaving booms. There is still today Hattersley Narrow Fabrics Mill in Keighley.)