The first head of the museum was Colin Ford who was succeeded by Amanda Nevill. The current head is Colin Philpott, a former BBC journalist.

The museum is on the site of a former theatre and art gallery in the centre of Bradford and came about as the result of discussions between Dame Margaret Weston and Bradford city. The National Museum of Photography, Film and Television, opened to visitors on the 16 June 1983. The museum launched Britain’s largest cinema screen, IMAX, five storeys high with six-channel sound, on the same day. At the time, it specialised in the art and science of images and image-making. Colin Ford believed that understanding how images are made led to appreciation of the ideas expressed and the intentions and skills of image-makers. To mark the 50th anniversary of the first public television service, two interactive television galleries were developed in 1986. These let visitors operate cameras on a studio set with programmed sound and lighting, use vision mixers, to read a news item from an Autocue and discover how Chromakey works. These exhibits survived until the re-naming of the museum in 2006.

In 1989, to celebrate the 150th anniversary of photography, the museum launched the Kodak Gallery, some of the 10,000 items illustrating popular photography from its invention. This was followed by installation of a standard television studio, first used by TV-am (for outside broadcasts) and later Nickelodeon. These studios were the first live broadcasting studios in a museum. Today, the equipment is used to teach students from the School of Informatics at the University of Bradford, with whom the museum has a partnership for BSc and BA courses in media and television. In 1994, TV Heaven was launched, making accessible the museum's collection of television programmes, most of which not available elsewhere.

While continuing to run Pictureville Cinema and exhibitions in a mill on the other side of the city, the museum closed its main site on 31 August 1997 to allow for a 19-month, £16 million redevelopment making the museum 25 percent bigger. The IMAX cinema was also developed to show 3D films. The new museum was opened on 16 June 1999 by Pierce Brosnan, making the museum one of the most popular in the UK.

On 1 December 2006, the museum was renamed the National Media Museum. 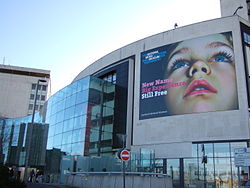 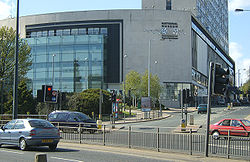 Entrance is free with the exception of cinema screens and some specialist exhibitions. The museum is open 10 am until 6 pm Tuesdays–Sundays. The museum closes for special tours on Mondays. The museum underwent a £16 million refurbishment in 1998, developing a new digital technology gallery and now hosts the BBC's Bradford offices, and studios for BBC Radio Leeds and the BBC Bradford and West Yorkshire Website. This new development created a new glass-fronted atrium, which houses a new cafe and shop.

There are seven permanent exhibitions:

We English is an investigation of the English at leisure. Between August 2007 and September 2008, Simon Roberts travelled the length and breadth of England, documenting people at play, relaxing and revelling.[2]

People are immersed in screen media for longer periods and with more intensity than ever before. From children watching television to people living out second lives through online virtual worlds, Robbie Cooper’s imagery captures the many ways in which people choose to disengage from everyday life.[3]

The museum is host to courses taught with the University of Bradford's EIMC Department including BSc Media Technology & Production, BSc Creative Media & Technologies, BSc Computer Animation and Special Effects and BA Media Studies. Subjects include broadcast television using the TV studio on its top floor. The EIMC degree show is in the Pictureville Cinema.

The museum's collection contains three million items of historical, cultural and social value, including the first photographic negative, the earliest television footage, the world's first moving pictures (Louis Le Prince's 1888 films of Roundhay Garden Scene and Leeds Bridge). It also contains original toys from the BBC series Playschool – the first programme on BBC2. The collections are accessible to the public through its Insight study centre. The collection of the Royal Photographic Society was transferred to the Museum on behalf of the nation in 2003.[4]

The museum incorporates the first permanent UK installation of an IMAX cinema[5] (with a second screen opening in the UK 15 years later). Opened in 1983 as part of the Bradford Film Festival with the projector visible from a darkened booth of the 4th floor, this screen runs IMAX presentations seven days a week, including IMAX prints of Apollo 13, The Lion King, Harry Potter and the Goblet of Fire and Batman Begins. In 1999, IMAX upgraded the system and began releasing IMAX 3D presentations.[6] In June 2010 it was announced that the Ray and Diana Harryhausen Foundation had agreed to deposit the animator's complete collection of some 20,000 pieces with the National Media Museum.[7]

The museum also incorporates the Pictureville Cinema – opened in 1992 and described by David Puttnam as 'the best cinema in Britain', Pictureville Cinema screens everything from 70mm to video; from Hollywood to Bollywood; from silents to digital sound, with certifications in presentation including THX in sound and picture and the Dolby EX system. This cinema is one of only three public cinemas in the world permanently equipped to display original 3-strip 35mm Cinerama prints.[8] In 2008, the cinema presented the only true recorded public screening of Danny Boyle's 2002 film Alien Love Triangle.

The museum hosts Bradford Film Festival in March, Bite the Mango in September and Bradford Animation Festival in November. These attract international speakers and new and classic works from around the world.