Manalapan Township is a township in Monmouth County, New Jersey, United States. As of the 2010 United States Census, the township population was 38,872.[3] The name "Manalapan" comes from the Lenape word for "land of good bread or good land to settle upon."[7]

Manalapan Township was formed by an act of the New Jersey Legislature on March 9, 1848, from portions of Freehold Township. Englishtown was formed as a borough from portions of Manalapan on January 4, 1888, based on the results of a referendum held the previous day.[8]

Yorketown (2010 Census population of 6,535) is a census-designated place and unincorporated area located within Manalapan Township.

The Battle of Monmouth was fought on land that is now part of Manalapan and Freehold townships. Monmouth Battlefield State Park occupies 2,928 acres (1,185 ha) in the two townships.

There were 10,781 households out of which 47.0% had children under the age of 18 living with them, 75.9% were married couples living together, 5.7% had a female householder with no husband present, and 16.5% were non-families. 14.9% of all households were made up of individuals and 10.4% had someone living alone who was 65 years of age or older. The average household size was 3.09 and the average family size was 3.45.

In 2008, seven residents of Manalapan were arrested on money laundering and drug trafficking charges, bringing in a net of $1 million per month in an international drug ring.[28] 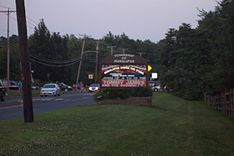 Manalapan Under the Stars in 2010

Three Manalapan landmarks are the headquarters facility of the Monmouth County Library, the Manalapan Recreation Center, and the battlefield for the Battle of Monmouth. Manalapan Under the Stars, the township's community celebration featuring rides, concerts, fireworks, and other activities, is held annually at the Recreation Center.[29] Name acts featured in the series have included Herman's Hermits Starring Peter Noone and Tommy James and the Shondells.

Manalapan was rated the second hottest town on the East Coast by Money magazine.[30]

Manalapan hosts U.S. Route 9 in the northeast, and State Route 33 passes through near the southern part of the township.

Major county routes, such as 522 and 527 traverse through the municipality, while 537 goes along the southeast border of the township.

Notable current and former residents of Manalapan Township include: