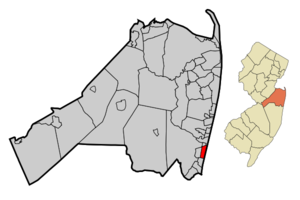 Spring Lake is a Borough in Monmouth County, , . As of the , the borough population was 3,567. Spring Lake and its environs are known as the "Irish Riviera" because of the large Irish-American population in the area, with Spring Lake having the highest percentage of Irish Americans of any municipality in the United States. [Warner, Susan. [http://query.nytimes.com/gst/fullpage.html?res=9805E0D81330F937A25754C0A9649C8B63 "Painting By The Numbers: What And Where Is Home?"] , "", , . Accessed , . "Spring Lake, New Jersey's so-called Irish Riviera, is indeed New Jersey's most Irish municipality. Just over half of Spring Lake's population, 50.7 percent, said it had roots in the auld sod."]

Spring Lake was formed as a borough by an Act of the on , , from portions of Wall Township), based on the results of a referendum held on , . On , , the borough of North Spring Lake was annexed.

The second of the five victims of the , Charles Bruder, 27, was killed on , , while swimming approximately 130 yards from shore in Spring Lake. [ [http://www.findagrave.com/cgi-bin/fg.cgi?page=gr&GRid=6725578 Find A Grave information for Charles Bruder] .] The wave of attacks took place between and , , along 80 miles of coastline.

Spring Lake is home to the Spring Lake 5 Mile Run, a race that circles the town beginning and ending at the beach front. It has more than 5,000 participants annually.

is a tidal pond located on the coast of the , surrounded by Wall Township and the boroughs of Spring Lake, Spring Lake Heights, and Sea Girt. The pond is the center of the Wreck Pond Watershed, which covers about 12 square miles in eastern Monmouth County.

There were 1,463 households out of which 23.0% had children under the age of 18 living with them, 57.8% were married couples living together, 7.2% had a female householder with no husband present, and 32.8% were non-families. 29.5% of all households were made up of individuals and 16.4% had someone living alone who was 65 years of age or older. The average household size was 2.43 and the average family size was 3.03.

39.4% of Spring Lake residents identified as being of ancestry in the 2000 Census, the highest percentage of Irish Americans of any place in the United States.

Spring Lake is governed under the Borough form of New Jersey municipal government. The government consists of a Mayor and a Borough Council comprising six council members, with all positions elected at large. A Mayor is elected directly by the voters to a four-year term of office. The Borough Council consists of six members elected to serve three-year terms on a staggered basis, with two seats coming up for election each year.

The is a public school that serves students in kindergarten through eighth grade. The school had an enrollment of 282 students in the 2005-06 school year. [ [http://nces.ed.gov/ccd/schoolsearch/school_list.asp?Search=1&DistrictID=3415570 Data for the H. W. Mountz School] , . Accessed , .]

Spring Lake is the setting for David Gebroe's movie "Zombie Honeymoon"Fact|date=August 2007 as well as the novel "On The Street Where You Live". [ [http://www.amazon.com/Street-Where-You-Live-Novel/dp/0743206029 "On The Street Where You Live"] , "amazon.com".] The opening scenes of Ulu Grosbard's 1968 film "The Subject Was Roses" were filmed in Spring Lake. [ [http://youtube.com/watch?v=pphgw4dfmuA] , "Clip from The Subject Was Roses"] [ [http://www.tcm.com/tcmdb/title.jsp?stid=1176&category=Notes] "Turner Classic Movies notes."] Spring Lake was also used as a stand-in for turn-of-the-century in the 1981 film Ragtime. [ [http://www.imdb.com/title/tt0082970/locations "Ragtime on IMDb"] ] In 's 1962 film "The Manchurian Candidate", the character of Major Bennett Marco (played by ) suffers from a nightmare set in Spring Lake. He imagines himself and his fellow soldiers sitting through a lecture by Mrs. Henry Whitaker of the Spring Lake Garden Club. A sign reveals the location of the lecture to be the fictional "Spring Lake Hotel." Eventually, the audience sees that the garden club meeting is merely an illusion and the platoon is actually at a meeting of Russian and Chinese officials in Manchuria. The Mrs. Whitaker character is actually a Chinese scientist named Dr. Yen Lo, portrayed by Spring Lake native . [ [http://www.geocities.com/emruf/mc.html "The Manchurian Candidate" script] ] [ [http://www.filmsite.org/manc.html "Filmsite.org" review] ]