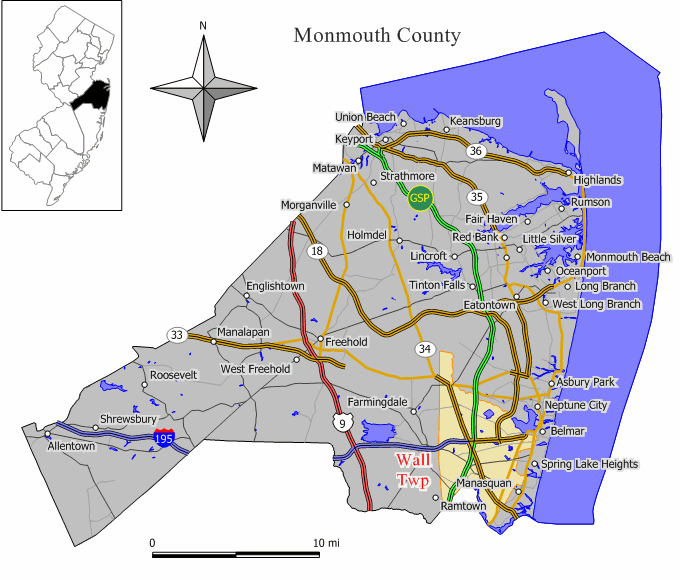 Wall Township is a Township in Monmouth County, , . As of the , the township population was 25,261.

Allenwood (2000 census population of 935) and West Belmar (2,606) are s and unincorporated areas located within Wall Township.

is a tidal pond located on the coast of the , surrounded by Wall Township and the boroughs of Spring Lake, Spring Lake Heights, and Sea Girt. The pond is the center of the Wreck Pond Watershed, which covers about convert|12|sqmi|km2 in eastern Monmouth County.

The township of Wall is named for General Garret D. Wall, a lawyer who commanded a Trenton volunteer company during the and was stationed at Sandy Hook. Wall served five years as clerk of the and as of the state for more than 20 years.

See for information about the Marconi Wireless Belmar Station (inhabited by the and the ), , the , , the development of , and other items of Wall Township History.

There were 9,437 households out of which 33.8% had children under the age of 18 living with them, 63.0% were married couples living together, 8.0% had a female householder with no husband present, and 26.6% were non-families. 22.7% of all households were made up of individuals and 9.7% had someone living alone who was 65 years of age or older. The average household size was 2.64 and the average family size was 3.14.