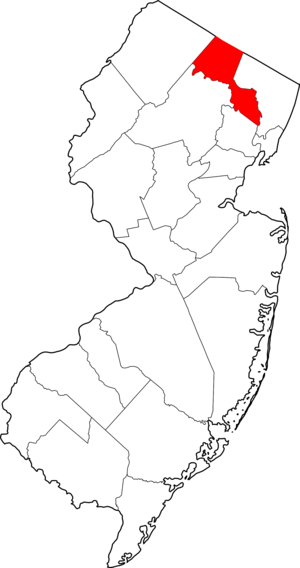 Passaic County was created on , , from portions of both Bergen County and Essex County.

The highest point is any one of six areas on Bearfort Ridge in West Milford Township at approximately 1,480 ft (451 m) above sea level. The lowest elevation is approximately 30 ft (9 m) along the in Clifton.

The southeastern, more populous half of the county is either flat near the river or mildly hilly. The northwestern section is rugged and mountainous.

In Passaic County's commission form of government, the discharge both executive and legislative responsibilities. Seven Freeholders are elected at-large for three-year terms on a staggered basis. A Freeholder Director and Freeholder Deputy Director are elected from among the seven Freeholders at an annual reorganization meeting in January. The Freeholders select a County Administrator who, in the role of chief administrative officer, supervises the day-to-day operation of county government and its departments.

Passaic County operates through six standing committees of the Board of Chosen Freeholders. They are Administration & Finance; Health, Education and Community Affairs; Public Works and Buildings & Grounds; Law & Public Safety; Human Services and Planning and Economic Development. The Freeholders also appoint individuals to departments, agencies, boards and commissions for the effective administration of county government.

Currently, all seven of Passaic County's Freeholders are Democrats. The party has been the majority party on the Board of Chosen Freeholders since 1998, when current freeholder Jim Gallagher and former freeholder Lois Cuccinello won two of the three seats up for election that year. Two years prior, the Republicans held an 7-0 majority, but those wins combined with the wins of and in the 1996 elections gave the Democrats a narrow majority of 4-3. That majority became 5-2 in 2000, when Sonia Rosado took the seat of incumbent , and became an absolute majority in 2004 when Terry Duffy and Pat Lepore were elected to replace multi-term incumbent Walter Porter and his running mate Michael Mecca.