Cliffside Park is a borough in Bergen County, New Jersey, United States. As of the 2010 United States Census, the borough population was 23,594.

Cliffside Park was formed based on the results of a referendum held on January 15, 1895, from portions of Ridgefield Township at the start of the second year of the Boroughitis phenomenon then sweeping through Bergen County.[9][10]

Cliffside Park is governed under the Borough form of New Jersey municipal government. The government consists of a Mayor and a Borough Council with all positions elected at large. A Mayor is elected directly by the voters to a four-year term of office. The Borough Council consists of six members elected to serve three-year terms on a staggered basis, with two seats coming up for election each year.[19]

Cliffside Park is in the 9th Congressional district and is part of New Jersey's 38th state legislative district.[22] The township was relocated to the 36th state legislative district by the New Jersey Apportionment Commission based on the results of the 2010 Census.[5] The new district is in effect for the June 2011 primary and the November 2011 general election, with the state senator and assembly members elected taking office in the new district as of January 2012.[22]

In the 2007 General Election, voters filled an open mayoral seat and two seats on the borough council. Incumbent Democrats ran unopposed for all three seats, with Mayor Gerald A. Calabrese (2,350 votes) and Council members Thomas Calabrese (2,275) and Kenneth Corcoran (2,251) all winning re-election. 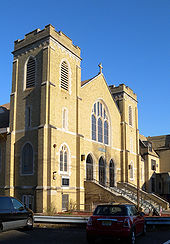 Roman Catholic Church of the Epiphany

Palisade Avenue and Anderson Avenue are the main north-south roads of Cliffside Park.

Scenes from the 1988 film Big, starring Tom Hanks and directed by Penny Marshall, were filmed in Cliffside Park.[46][47]

Notable current and former residents of Cliffside Park include: