Bisected by the Raritan River, the county is topographically typical of Central Jersey in that it is largely flat, with minimal relief. The highest point is a hill scaled by Major Rd. near Route 1 in South Brunswick Township of approximately 300 feet (91.4 m) above sea level; the low elevation is sea level.

Middlesex County is a Democratic stronghold. In the 2004 U.S. Presidential election, John Kerry carried the county by a 13.6% margin over George W. Bush, with Kerry carrying the state by 6.7% over Bush.[13] In 2008, Barack Obama carried Middlesex by a 21.8% margin over John McCain, with Obama winning New Jersey by 15.5% over McCain.[14] However, in the 2009 Gubernatorial Election, Republican Chris Christie received 47% of the vote, defeating Democrat Jon Corzine, who received around 45%.

Middlesex hosts a few highways/interstates as well. Middlesex County hosts the southern end of the Middlesex Freeway (Interstate 287) which then turns into Route 440 that connects to the Outerbridge Crossing. The Garden State Parkway passes through the eastern edge of the county, which features nine interchanges and the northern start/end of the split-roadways (Express & Local Lanes). The New Jersey Turnpike carries Interstate 95 through the center of the county. The Turnpike has five interchanges in Middlesex: Exit 12 in Carteret, Exit 11 in Woodbridge, Exit 10 in Edison, Exit 9 in East Brunswick and Exit 8A in Monroe. The turnpike also features the southern end of the "dual-dual" configuration (inner car lanes and outer truck lanes) which is one mile south of IC 8A at the border of Cranbury and Monroe.

The NJDOT is currently upgrading the Route 18 "avenue" to a freeway between the Route 1 interchange all the way up to the new 18 Extension in Piscataway.

The Turnpike Authority planned to build Route 92, which was to start near the intersection of Ridge Road & Route 1 in South Brunswick Township to Interchange 8A in Monroe Township. This plan was cancelled on December 1, 2006. Instead, the Turnpike Authority will extend the "dual-dual" from Monroe Township, south to the interchange with the Pennsylvania Extension (Exit 6) in Mansfield Township. This widening is anticipated to be finished by 2014.

Middlesex is also served by many county routes as well. See a full list here.

Middlesex County is served by New Jersey Transit for rail service and both New Jersey Transit and Coach USA for bus service. There are bus routes that serve all townships in the county. The main rail lines that serve Middlesex are: North Jersey Coast Line, Northeast Corridor Line, and Raritan Valley Line. The North Jersey Coast Line runs through the eastern part of the county. The Northeast Corridor Line runs through the northern and central part of the county. The Raritan Valley Line serves some communities along the county's northern border with Union County.

Intercity rail service is also provided by Amtrak. The routes that runs through Middlesex are the Acela Express, Keystone, Northeast Regional, and Vermonter services, although only the Keystone and Northeast Regional stop within Middlesex County, at either New Brunswick or Metropark.

The county boasts capacity of more than 1,900 hospital beds among 5 major hospitals.[16]

Major non-governmental employers in Middlesex County include the following, grouped by ranges of employees:[17]

The following is a list of the municipalities in Middlesex County. Other, unincorporated areas in the county are listed below their parent municipality (or municipalities, as the case may be). Most of these areas are census-designated places that have been created by the United States Census Bureau for enumeration purposes within a Township. Other communities and enclaves that exist within a municipality are marked as non-CDP next to the name. 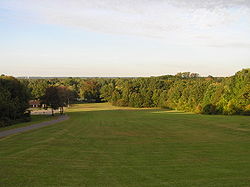