Infobox Settlement
official_name = City of Hackensack
settlement_type =
nickname = A City in Motion [ [http://www.fdu.edu/newspubs/magazine/01fa/hack.html "Hackensack"] , "FDU Magazine", Fall / Winter 2001. Accessed , . "Billed as “A City in Motion,” Hackensack has been on the move since before the founding of the United States."]
motto = 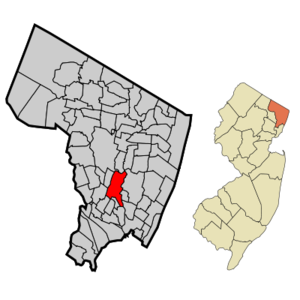 The Metropolitan campus of straddles the Hackensack River in both Hackensack and Teaneck. Hackensack is also the home of the and the "USS Ling". is perhaps Hackensack's most famous native son.

Hackensack operates under the form of New Jersey municipal government. The City Council consists of five members who are elected to four-year terms on a concurrent basis in non-partisan elections.

After Joe DeFalco died in 2005 on Election Day, his running mates agreed to create a rotation under which each of the four surviving members of the New Visions for Hackensack slate would serve for a year as Mayor, creating a series of firsts for the City. Townes took office in 2005 as the city's first black mayor, and Sasso became the first female mayor in 2006. Meneses became Hackensack's first Hispanic mayor when he was sworn in on , , and Melfi takes the reins as mayor in 2008. [Sposito, Sean. [http://www.northjersey.com/page.php?qstr=eXJpcnk3ZjczN2Y3dnFlZUVFeXk0NSZmZ2JlbDdmN3ZxZWVFRXl5NzE2MjE5MSZ5cmlyeTdmNzE3Zjd2cWVlRUV5eTM= "Hackensack swears in its first Hispanic mayor"] , "", , . Accessed , . "Members of the City Council have been rotating the mayoralty since running mate Joe DeFalco's fatal heart attack on election day 2005. Traditionally, in Hackensack a mayor is appointed after the council is elected. But DeFalco's sudden death left the New Visions for Hackensack ticket in disarray. Councilman Marlin Townes served until June 2006, becoming the city's first black mayor. He was followed by Karen Sasso, who became the city's first woman mayor. She handed over the reins to Meneses on Sunday.... Newly appointed Deputy Mayor Michael R. Melfi will take his turn as mayor next in what Sasso describes as a "tag team" of politicians."]

The , a public magnet high school located in Hackensack, serves the high-school population of Bergen County, as part of the district.

The Metropolitan campus of straddles the Hackensack River in both Hackensack and Teaneck.

Interstate 80, Route 17, Route 4, and County Route 503 serve Hackensack, while there are many other main roads in Hackensack.

The is a planned rail system that will have two stops in Hackensack. [cite news| url=http://www.northjersey.com/news/Residents_get_scoop_on_light_rail_line.html| title=Residents get scoop on light rail line| author=Superville, Denisa R.| date=September 20, 2008| accessmonthday=September 22| accessyear=2008| ]

The first inhabitants of the area were the Native Americans (known to the European settlers as the Delaware) who lived along the valley of what they called the "Achinigeu-hach", or "Ackingsah-sack", (today the ) and spoke a Munsee dialect of the . A representation of Chief Oratam of the Achkinhenhcky appears on the Hackensack municipal seal. [ [http://www.getnj.com/origname/orignameh.shtml The Origin of New Jersey Place Names: H] , GetNJ.com. Acecssed , .] [Cheslow, Jerry. [http://query.nytimes.com/gst/fullpage.html?res=9C07E6D9173EF930A35756C0A96E958260&sec=&spon=&pagewanted=2 "If You're Thinking of Living In/Hackensack, N.J.; After Long Decline, Downtown Rebounds"] , "", , . Accessed , . "Hackensack is named for the Achkinhenhcky branch of the Leni Lenape Indians, who traded with Dutch settlers along the Hackensack River as far back as the 1660s. The portrait of their chief, Oratam, who negotiated a treaty with English and Dutch settlers in 1690, appears on the municipal seal."]

As the Dutch settlers of the in (present-day ) moved west of the in the 1660s, they eventually settled along the calling the area "Bergen".

Oratam, sagamore of the Lenni Lenape, deeded the land to the Dutch in 1665 ( [http://upload.wikimedia.org/wikipedia/en/6/67/Bergen_County_Seal.pngsee the seal of Bergen County] ). The area was soon taken by the English in 1669, but kept its Dutch name. Philip Cartaret, governor of what was then considered the of granted land to Captain in the area of Bergen and soon after took up residence and called it "New Barbadoes," after having resided on the island of .

New Barbadoes Township, together with Acquackanonk Township, were formed by on , .

The neighborhood that came to be known as the village of Hackensack (today the area encompassing Bergen County's municipal buildings in Hackensack) was a part of Essex County until 1710, when Bergen County, by of Queen Anne of Great Britain, was enlarged and the Township of New Barbadoes was removed from Essex County and added to Bergen County.

In 1710, the village of Hackensack in the newly formed Township of New Barbadoes was designated as being more centrally located and more easily reached by the majority of the Bergen County’s inhabitants, and hence was chosen as the of Bergen County (as it remains today). During the , headquartered in New Barbadoes Township in the village of Hackensack in November 1776 and camped on 'The Green' across from the First Dutch Reformed Church. This prepared the way for the first American victory of the Revolution the following month at the .

The passed a school act in 1894. Each village, borough, town, or city in New Jersey was delegated responsibility for its own public schools through the office of the county superintendent. One result of the 1894 Act was the formation of in the village of Hackensack in the Township of New Barbadoes.

Over the centuries, after many departures, secessions, and de-annexations due to what is now referred to as "", all that was left of New Barbadoes Township was the village of Hackensack and its surrounding neighborhoods (Fairmount, Red Hill, Cherry Hill). On , , based on the results of a referendum held on , , New Barbadoes Township received its charter to incorporate as a city and "officially" took on its name “Hackensack,” a name derived from its original inhabitants, the , who named it "Ackingsah-sack"."

[ [http://www.thearticlewriter.com/hackensack.htm Hackensack, New Jersey: 300 Years of Modern History] , accessed , .] and the "USS Ling", a , and several smaller water vessels and artifacts. The museum is open select weekdays for group tours.

Other points of interest within the city include the , Hackensack River County Park, the Church on the Green, the Ice House rink, and the Bergen County Courthouse.

(formerly known as Riverside Square Mall), is an upscale shopping center located at the intersection of Route 4 and Hackensack Avenue at the northern edge of the city along the . The mall, which is in the process of a fairly significant expansion, is anchored by a number of high-end department stores and restaurants, including , , , and .

is a detention center for both sentenced and unsentenced prisoners.

Radio station at 970 AM, is licensed to Hackensack and has its transmitter in the city. The station is currently owned by and plays a format. During the 1970s, it played a music format for several years, competing (unsuccessfully) with Top 40 powerhouse 77 .

*Hackensack in mentioned in the song "Roller Derby Queen":"Well she might be nasty:She might be fat:But I never met a person:Who would tell her that:She's my big blonde bomber:My heavy handed Hackensack mama."

*Hackensack was to have been for the nuclear warhead that successfully redirected into space in "Superman" (the other warhead detonated on the ). Hackensack was the hometown of the mother of 's character, Eve Teschmacher.
*The song by features the lines:"Last Sunday afternoon:I took a trip to Hackensack, :But after I gave Hackensack the once-over,:I took the next train back."
* lists Hackensack as one of the places he's visited in the song
*The Danish rockband Hackensack has taken their name from Hackensack, NJ

*The band has a song called "Hackensack" from their 2003 album "". The song is about somebody recognizing a girl he used to know from who had become famous.

:"And I will wait for you:As long as I need to:And if you ever get back to Hackensack:I'll be here for you"

:"Who needs a house out in Hackensack, :Is that all you get for your money?"
* mentions Hackensack on their 1975 album in the song "Daddy Don't Live in That New York City No More".
*Hackensack is also mentioned in 's song "Lost in Hollywood" from the album :

:"The lines in the letter said :'We have gone to Hackensack' "
* went to the prep school, the Newman School, in Hackensack in 1911.
* Hackensack is also mentioned in "" by .:Stanley, the waiter, to Willy Loman in Act 3, "But I know you, you ain't from Hackensack. You know what I mean? "
* The 1985 film "" starred , who played a pitcher for the Hackensack Bulls, a fictional minor-league baseball team. [Blowen, Michael. [http://nl.newsbank.com/nl-search/we/Archives?p_product=BG&p_theme=bg&p_action=search&p_maxdocs=200&p_topdoc=1&p_text_direct-0=0EADEAEDCD5F2DD1&p_field_direct-0=document_id&p_perpage=10&p_sort=YMD_date:D&s_trackval=GooglePM "PRYOR STEALS 'BREWSTER'S MILLIONS'"] , "", , . Accessed , . "Pitcher Montgomery Brewster (Richard Pryor), a dead ringer for Satchel Paige until he throws the ball, plays for the Hackensack Bulls in the mythical Jersey League."]
* In the 1998 film "", Chucky's human body is said to be buried in a fictional Hackensack Cemetery. [ [http://movies2.nytimes.com/mem/movies/review.html?_r=1&title1=Bride%20of%20Chucky%20(Movie)%20%20&title2=&reviewer=Lawrence%20Van%20Gelder&pdate=19981017&v_id=&oref=slogin FILM REVIEW; Carrying a Torch for a Malevolent Doll] , "", , .]
* In the 2001 film "", Hackensack is mentioned as where Mugatu first made his novelty neck ties.
* [http://linuxmafia.com/pub/humour/you-said-a-mouseful Season 1 Episode 48] of "" is set in the Hackensack Socko Kicky Sack Kicker Factory.
* Hackensack was home to the legendary Van Gelder recording studio where Jazz greats and recorded some of their landmark work. Thelonius Monk recorded a tribute to entitled "Hackensack".
* , the comic created by , takes place in Boston, however Bucky was found on top of a trash can in Hackensack by Rob Wilco.
* Hackensack is mentioned in the song "Wu Banga 101" in the following lines:

:Play, fullback strapped like a f***, war at:the black, 's stash house in Hackensack.
*On an episode of the Sopranos Vito is seen shopping at the local Hackensack Stop and Shop Store#817
*Under the pseudonym , has composed a entitled "O Little Town of Hackensack", a humorous parody on the traditional carol "".

*In the 2002 film , the main character, Igby Slocumb, tells Sookie Sapperstein that he needs to go to Hackensack to take his GED test. The following scene shows Igby boarding a bus at the in , with the electronic sign in the front of the bus clearly indicating "Hackensack" as its destination.